One of the great things about owning a Brompton is that you can take it anywhere. I know lots of Brompton owners who do not have a lock of any description for this very reason. It is very rare for me to actually lock one of my Brompton bikes up as I just couldn't bear not knowing it was safe and sound.

I will recall a tale from my past which has stayed with me and will stay with me for life! After coming down from university I worked in central London. Those of you who have read my blog long enough will know that I hate public transport with a passion. If it is busy I have a tendency to become uncomfortable to the extent that I have had to get off and walk! My salvation came in the form of a mountain bike on which I could cycle in to work on. (I did have a 1998 or 1999 Brompton but sold it).

At this time bicycle D-locks were fairly new. I remember Keith Chegwin on a Saturday morning television programme trying unsuccessfully trying to unlock and saw through one. To protect my mountain bike (which wasn't at all expensive) I bought a D-lock. Every day I cycled to Cavendish Square and locked my bike to the metal railings near the green taxi cafe hut.

All was fine for about three months until one fateful Tuesday evening. After work I went to where my bike was locked to discover that it was gone. I had become a statistic. What was worst was that my bike thief had, through secrets of the thief guild, managed to unlock my lock, take the bike and lock my D-lock back to the railings! He was either a skilled locksmith or a member of the Magic Circle who had perhaps fallen on hard times?

If mobile phones with a camera had of been widely available back then, I would have taken a photo. When I got home and told my parents they nodded reassuringly but my dad could contain his laughter no more and I thought he was going to die there and then. For the next few days every time he saw the D-lock which rested on the hall table, he went into fits of laughter.

Thankfully, technology has moved on. Yesterday at the Nocturne I had to leave my Brompton unattended so I locked it to the metal barriers using a meaty 'Kryptonite Evolution Series 4' D-lock. Pity they weren't around all those years ago! 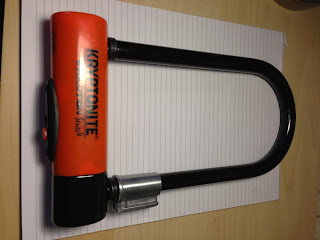