Out with my Ricoh for some Street Photography

Today I felt like going out, taking my trusty Ricoh GRD III with me and taking some snaps.
I ended up near the Museum of London and took loads of photos some of which are below.  I have noticed that the battery life on the Ricoh seems to be excellent.  I haven't charged it since I bought it and I must have taken about 70 shots today. Despite this there seems to be plenty of life left for even more shots.
I am gradually becoming more blatant in my street photography and getting more shots of 'people.' I do however still find this difficult and with the fixed 28mm lens you do have to get quite close for portraits. As yet most of my shots are from a distance.

All in all I am still very impressed with my little Ricoh. The screen is totally gorgeous for checking your shots and I love the fact it is lightweight and discrete.

In a couple of weeks time I plan to go to one of the many London street markets and get as many shots as my battery allows. Hopefully this will allow me to get some illusive portrait shots I am after.

On the Brompton front I have started a little training regime. So far this has consisted of a brisk 20 ride every night. So far I have managed every night this week apart from Friday and Saturday. I plan to go out later tonight. My strategy if to gradually increase the length of time I am out and then go for much longer rides at the weekend.
I was going to enter the London Nightrider event but the prospect of collecting £175 for charity seems pretty remote as i had collected for the BWC last year. There is the option for paying £99 and collect as much as you can but that is just too much for me. It might be my first Dunwich Dynamo this year as I feel I need an all nighter?
at January 29, 2012 2 comments:

Training on a Brompton

I have been toying with the notion of participating in the 'Nightrider' 100km cycle ride in the summer. This is a charity bike ride where one takes in many of the sights of London at night. I'd love to do it but feel I am not fit enough or have enough miles under my belt.

Tonight I decided to go out on my first training run. I kept things very simple. I cycled round the block which is quiet and fairly car free for 20 minutes. I kept up a brisk pace and was out of my saddle for a fairly sustained incline.

I would love to keep this up and after a week or so increase the time I cycle slightly. Any advice on how often to do this would be welcome.

A cold winter morning with my Brompton and Ricoh

This morning it felt as if winter had finally taken. It was frosty and quite cold. I ventured out to Regents Park and took a few photos with my Ricoh GRD.
The image below has been tinkered with slightly with a very inexpensive app called 'Big Aperture.' I like it quite a bit as you can produce 'Lomo' like colours and cross processes.
The SL2 Brompton will have to stay indoors for the next few days I think. Here in London the grit lorries have been out in force. This means a liberal dousing of salt and grit on the roads which is something I really don't want to inflict on my lovely raw lacquer.

Anyone out there know of a good chain lube/oil that would be good for a Brompton? At the moment I use WD40 or GT85. I'm not sure these are the best to use and would be grateful for any tips. Happy cycling!
at January 15, 2012 4 comments:

Well another milestone has been reached. 14,000 page views! I am very pleased at this and thank all my loyal readers and those who dip in now and again. With regards the SL2 vs the ML6 I do find the more upright ML6 strange after riding the S Type for a few days but love them both. The new higher psi Marathon tyres are brilliant and I think I will have to get them on the Orange Brompton. Marathons are great for winter riding but there doesn't seem to be much of one at the moment. I'm not complaining about that though.

Just got some details of the new all swinging and dancing Marathon Tyres that were fitted to my new Brompton. The new version of the marathon tyre has the model number HS420 (the previous version was HS368) and you should be able ot purchase these from Brompton dealers (the Brompton part number is QTYRMREF or 9026067) and most bike shops. They really are great and if I can get them I want to put them on my Orange Brompton.

More shots with Ricoh GRD III in the wind!

London and the rest of the country has been hit in the past couple of days by some very strong winds - gales in some parts of the country.

I stoically continued to make my daily commute by Brompton folding bike. Yesterday it was the SL2 and today the ML6.  I love both bikes but I am still leaning towards the 2 speed and S-Type flat handlebars.

While out and about, as I have my Ricoh with me I decided to get a few shots. The first two were taken just off the Strand and the third in Trafalgar Square. This last one represents my first foray in ernest into 'street photography.' I simply got my camera up and took a shot. I hope to get more opportunities to take some better shot but I am worried that someone might take exception to being photographed at random. 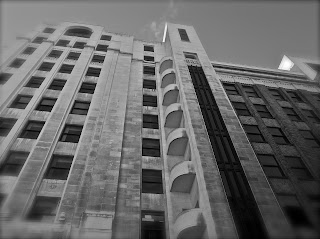 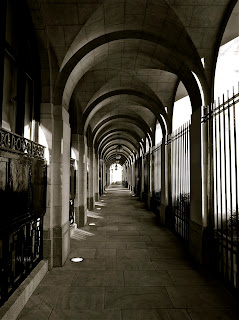 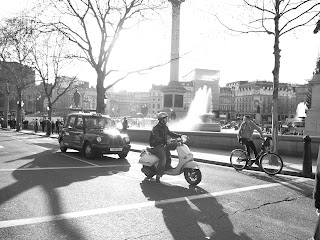 The good thing about the Ricoh GRD III is that it is very discrete and doesn't scream out for attention like a hulking DSLR would. I suspect that few people would even notice. Added to this is its almost silent operation. With the weekend almost here I plan to get out and go to one of the many London street markets and see what shots I can take.

In the meantime if you're cycling take care and try not to get blown over in the wind!
at January 05, 2012 No comments:

In London with my Ricoh GRD III

I ventured into Central London this morning. Things were getting set for the New Years Day Parade which meant that loads of roads were shut off. This meant that I wasn't able to get to where I wanted to go but I took a few more shots with my Ricoh GRD III this morning.

I have taken to shooting in RAW and black and white Jpeg. With the RAW images I don't really do a huge amount to them - yet. The Ricoh records the RAW image in colour and the Jpeg as black and white. The two pictures I have posted on here are the RAW images with minimal processing on iPhoto. I am sure I'd be able to do a great deal more with them if I had Photoshop but I am happy with what iPhoto does for the moment.  Any advice from more photographers with more knowledge than me would be welcome.

I am very pleased with the results so far and I am still amazed that a compact with such as small sensor can produce such sharp and detailed images. This little Ricoh is rapidly making all my other cameras start to gather dust. The fixed 28mm lens and not having any form of zoom doesn't seem to be a problem or bother me yet.

The SL2 was with me today and I am still loving the gearing and feel of the S-Type handlebars. Like many Bromptonites out there I suspect the coming on the new year turns to thoughts of BWC 2012 and perhaps another lunch ride in May?? I feel as if I should start training now but not overly sure what form of training this will involve? Any ideas fellow Bromptonites?
at January 01, 2012 3 comments: