Some bling for the Orange Flame Lacquer

You buy a Brompton and you make it your own. You really could go around saying that there are many like it, but this one is mine. This notion of making your Brompton personal to you is definitely a thing.

Along with the Brooks B17 Titanium and copper ended Brooks leather grips I decided to get some copper/golden hinge plates. 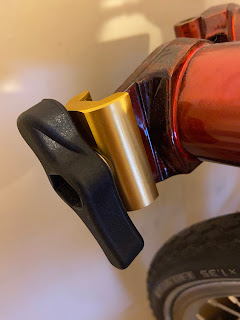 I have to say these ones are pretty good. The come with a pair of little springs that allow the plate to push itself out and not turn around. 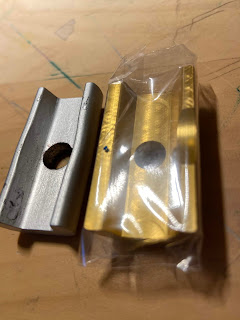 I don't really go in for huge amount of customisation on my Brompton bikes and prefer more subtle enhancements. These fit the bill rather nicely. 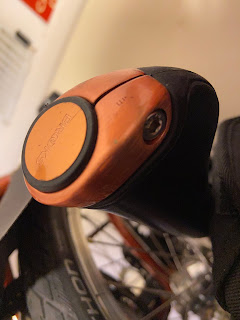 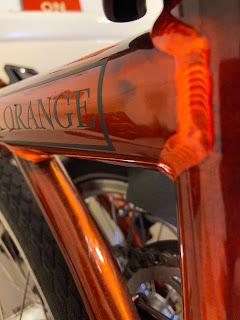 You have hopefully read the blog post and you can now watch a short video that hopefully captures what it is like to ride your Brompton in London in a group.

It has been recorded in 4K so watch at the highest quality you are able.

Link to my video

Email ThisBlogThis!Share to TwitterShare to FacebookShare to Pinterest
Labels: Videos

The 'Winter Lights' at Canary Wharf - which runs until 25th January - has become an annual fixture of the the lovely London Brompton peeps. Having attended for a number of years I was pleased that a sizeable group had set last Friday as the day we would attend.

The meeting point was the London Eye and rather than take the car I decided to cycle just over the 18 miles to the start at 18:00. Part of my route took me on the Grand Union Canal and again it proved to be a little bit of a shock to the system! There weren't that many cyclists heading into London but there were loads cycling from it. Many had no lights, wore dark clothing and as such almost invisible - even with my lights blaring ahead.

I made it to the Eye with seconds to spare and my face felt the cold a little more than normal as any breeze enhanced the dentistry work undertaken earlier in the day on an upper molar!

At the meeting point most of the runners and riders were ready for starters orders and there were some familiar faces. Dr John, David, Anne, Zoom Zoom, Jenny and Andrew were there and it was great to see them again. All we needed was Geoff and Mark to have the 'old firm' complete. 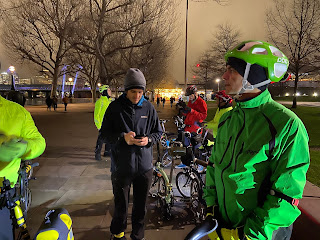 After a quick briefing we were off, heading east towards Canary Wharf. The miles flew by as easily as the conversations. We caught up on all the gossip and planned the weeks ahead for more cycling adventures. 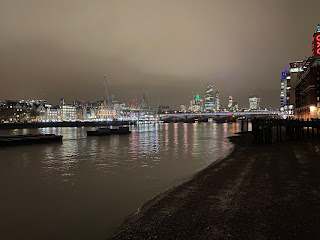 Every so often we stopped and took the odd photograph. I decided not to take my big camera with, opting for just my iPhone. Taking photos after dark is challenging but it coped pretty well. 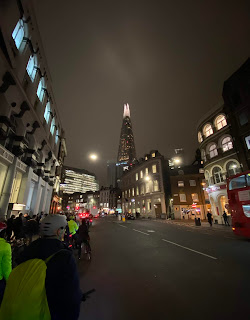 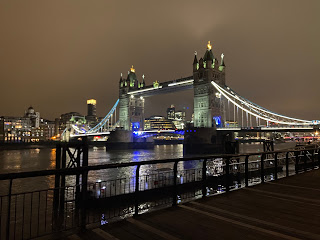 Our route was very familiar territory and hugged the river Thames. With Canary Wharf - with its ever changing skyline - in the distance we knew that it wouldn't be too long before we reached the Winter Lights. 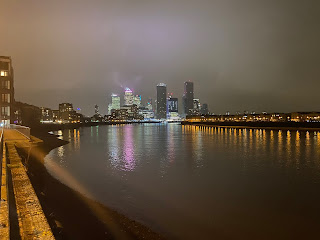 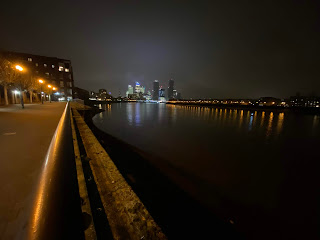 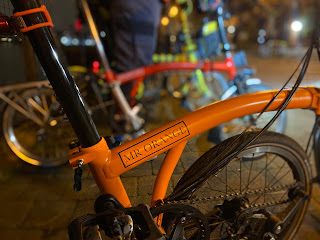 Naturally this was the moment a group photo was taken to prove that we were there. 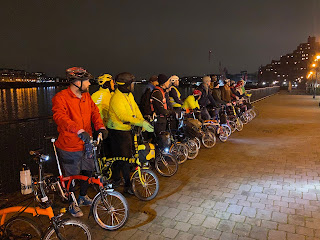 At Canary Wharf things were busy. People mainly viewed the various installations on foot and again I felt the Brompton provided the perfect way to see whatever you wanted quickly.

First we saw '16 bits' which consisted of a wall of light that pulsed. It was somewhat hypnotic. 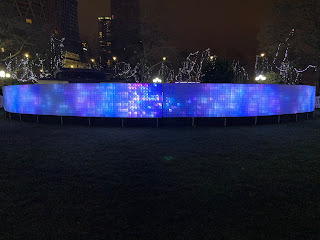 The next one was 'Sky on Earth.' This was a cross between a generous bubble bath and something out of a 1970's sci fi movie. 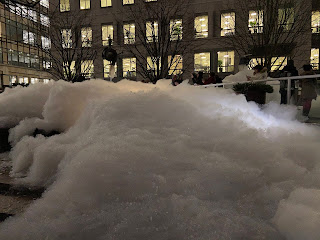 The 'Shish-Ka-Buoy' glowed various colours and was likened to something I cannot commit to this blog by a fellow participant! 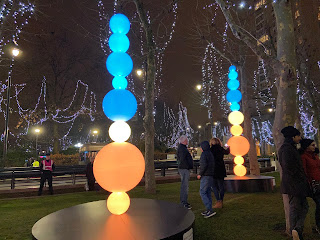 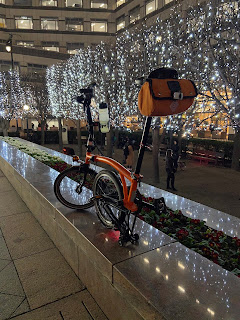 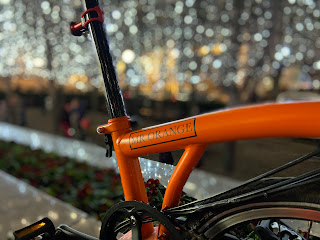 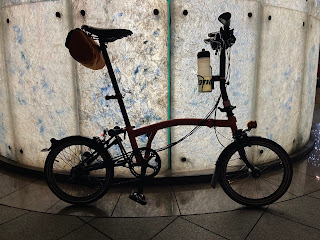 The 'Mountain of Light' proved to be a riotous success by the number of people taking selfies next to it and in one case a person attempting to straddle it!! 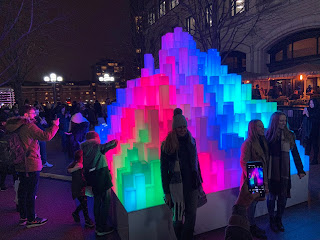 'Liquid Sound' again proved popular and various pulses of water pumped out the the accompaniment of music that was definitely 'Radio 3.' 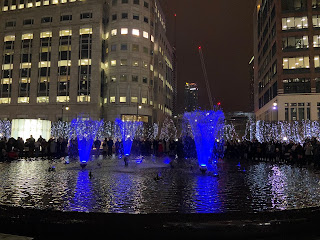 I took a photo of the 'Neon Tree' from a distance as it would have meant wheeling my beloved Brompton across grass. Even talk of an orange bra suspended from a tree could not induce me over across said grass. 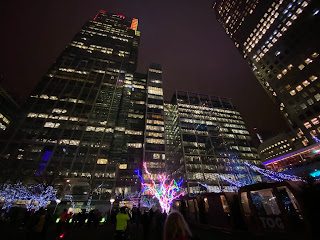 'Constellations' was another hypnotic installation and the ring of light made made me think of portals or worm holes. 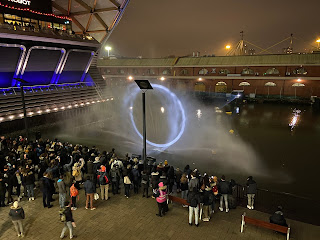 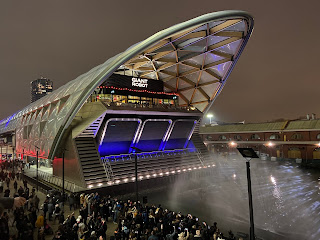 'Affinity' was again very popular with the selfie-taker and reminded me of O-level Chemistry and as such took an instant dislike to it. 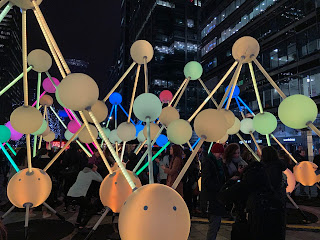 The last installation I took a photo of was 'Pools of Light.' This were little plastic balls floating on water. The poor security staff were constantly reminding visitors that they were not to throw, touch or even think that 'Pools of Light' was an interactive installation! I felt sorry for them as they must have been saying the same thing all night and every night! 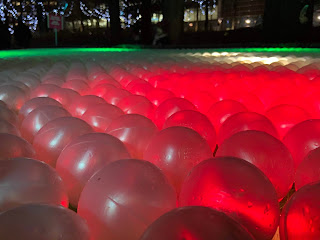 By this point I had seen all I wanted to see - my tooth was starting to let me know it wanted a hot drink - and I was pleased when David announced we were heading back. Our journey back to Waterloo Station was purposeful. At the Tower of London I said my goodbyes to the front of the Brompton peloton and made my way home. 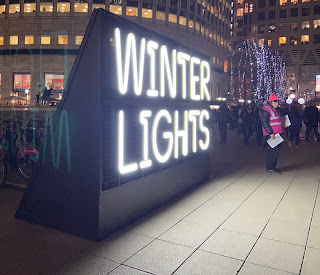 Many thanks to David and Jenny for leading and acting as Tale End Charlie respectively. It was great to see lots of faces from the past as always wish I could see therm more often. I will hopefully see one of them - my dear friend Dr John - in less than two weeks for the start of several adventures. It will probably mark the start of cycling adventures proper for 2020.