I have written many times that this blog was first and foremost an online diary for myself, so that I can look back and see what I have been up to on my Brompton bikes. A very welcome bonus over the years has been connecting with many people all across the world, who kindly read my ramblings and occasionally contact me. Not long ago I received a message from Elise all the way from Adelaide, Australia about her Pappa, Stanley who is turning 80 on 5th January. I have to say it was to make my day.

Elise explained in her message that her Pappa, Stanley (surely it must be Stan in Australia) loved reading my blog and reading about my adventures. (Do you know dear reader, I instantly warmed to Stanley)! Elise wondered if I could drop him a message for his birthday but I felt I could do better and write a blog post in his honour.

Elsie explained that her Pappa has a Brompton and has been a keen cyclist all his life. He keeps it clean and in 'new condition.' He is a man after my own heart. 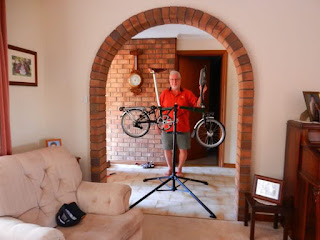 The photo below is from 1976 when Stanley cycled from Klemzig to Victor Harbour and back - getting on for over 120 miles. It is wonderful that Stanley still cycles at approaching 80 and I feel we can all take inspiration from him. I certainly hope that if I am still around at 80, I will be doing the same.

Your Granddaughter Elise and the rest of your family must love you a great deal and I think what she has done here is a wonderful thing.

So Stanley, we have never met, live thousands of miles apart, are from different generations and yet we have a common bond that is cycling and of course a Brompton. I wish you a very happy birthday for the 5th January, a very merry Christmas and many more years of cycling adventures. (Naturally, it goes without saying, keep reading this blog)!

Until next time, stay safe out there Stanley.

Last Friday was the Brompton Christmas lights ride. It was the day of train strike but this not being an issue for me - as I rarely use public transport anyway - I headed for the meeting point at Trafalgar Square. There were a few familiar faces out on their various Brompton bikes.

I arrived just in time, taking a detour to see the lights on Regents Street, before we almost certainly viewed it as a group. London was busy and I very much welcomed this as I still remember lockdown and how it resembled a ghost town (something I really disliked). 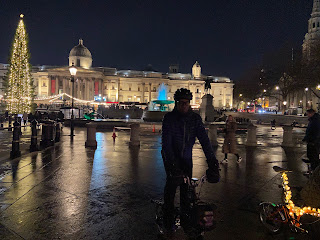 We set off promptly and after a few minutes we arrived at Covent Garden. Covent Garden has a long history going back to the Romans and Anglo-Saxons. The market has long been displaced by all manner of shops, eateries, clubs, theatres and pubs.
Seven Dials is a a road junction within Covent Garden that is essentially a roundabout. At its centre is a column bearings six sundials with the column being the seventh. I am ashamed to admit that it can be rather amusing to watch those unfamiliar with the various directions on offer, as you can often see then going down one street only to return to go down another.
Not far away Carnaby Street provided lots to see. Close to Oxford Street and running almost parallel with Regent Street, it has been living off its popularity from the 1960s. Back then it was frequented by the likes of The Who and The Rolling Stones.
There are still some rather good shops to be seen on Carnaby Street and it is always decorated rather nicely for Christmas. 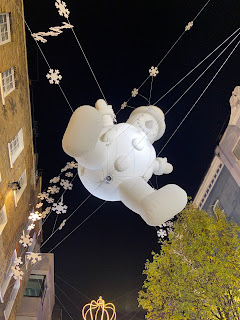 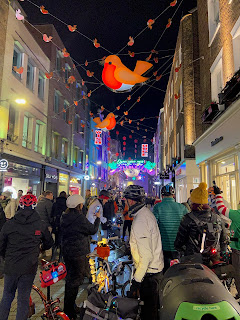 Oxford Street is Europe's busiest shopping street and this evening was not exception. Originally is was an important Roman road. Much later it was just known as Tyburn Road as the Marble Arch end was the notorious site for public executions. For the Brompton user it was a lovely way to see the lights and ride in a Brompton peloton
The lights on South Molton Street have not changed for years but are always a welcome sight. The street runs from Oxford Street to Brook Street and contains lots of unique shops.
Bond Street is home to many very expensive shops. Many do not display a price tag for their wares and the old adage, if you need to ask, you probably cannot afford it, rings true even today.
One of my favourite shops, 'Chappell' that sold all kinds of sheet music has long gone. I do recall going there to buy the sheet music for mainly television/film themes, rushing home to quite literally butcher them on the piano! 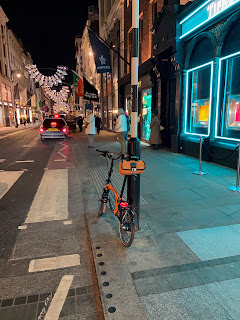 At 181 Piccadilly, stands Fortnum and Mason, an upmarket department store that has been around for years. Despite still being very much the real thing, over the years it has become more touristy. Despite this, it still makes one of the nicest range of tea you can buy anywhere.
The Regents Street lights rarely disappoint and often rival and better those found on Oxford Street. Again, it provided lots of photo opportunities.
At 46 Berkeley Square stands, Annabel's. This is a private members club that always decorates its outside well at Christmas. Some might say that this is the best part of it. I couldn't possibly comment!
After - I think 7 or so miles - and with SW7 only a few pedal strokes away though Hyde Park, I made my farwells and headed off. I was starting to feel the cold, despite the several layers I had gone out in. 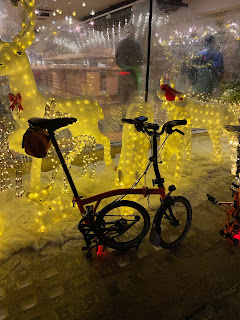 In Grosvenor Square they had a rather lovely display of illuminated flowers. These were made all the better by a thin layer of snow that was just about still there from earlier in the week.

Heading back through Hyde Park, Winter Wonderland was in full swing and lots of people were out and about either going in or coming out. It did not take too long to get back to the warmth and as I looked at my parked Brompton, I considered whether I would be out on it before the end of 2022?
Until next time, stay safe out there people!