To date, my idea of London Transport themed material being used for Brompton bags had not happened but another set of Liberty Fabric has been released.
Just like the 'Metropolis' a material I do like, they have just released a new blue version called, 'Jonathan.' Just like the 'Metropolis' you can get this in a backpack, basket bag, tote bag and pouch.
I think it looks rather good. I already have far to many bags so won't be getting on but i do think that the little pouch could come in very handy - especially on my Cloud Blue.
at September 06, 2021 No comments:

I have been a Londoner all my life. In the past I have lived within a short walk of some of the famous touristy bits. Since meeting Mrs Orange I have lived a little further out but still well under 30 minutes on the tube from all the good stuff. I have always been interest in history and the history of London in particular and at university - you guessed in in London - I read history. Lately I have found cycling on one of my Brompton bicycles has helped.

You might have read some of the day rides that I been attending in which I have cycled around London on a particular theme: pubs, Monopoly and recently cats. You might also have read my own efforts with my Beatles locations ride. Armed with various maps, books on London walks and book about the history of London I have been working away on a few rides purely for my own interest.

I have been putting the finishing touches to:

May of these can actually be done as walking routes too and as Mrs Orange does not cycle, that is how will be test them out. Naturally, what makes a ride/walk really good is the quality of tea and cake stops. They will feature heavily.
On my study wall I have a large map of central London that I use together with google maps on my iMac to view routes. Once I have a rough idea of where I want to start and end, I head on to Ride With GPS and plotting a route that can be followed via my Wahoo, phone or watch is but a few clicks away. 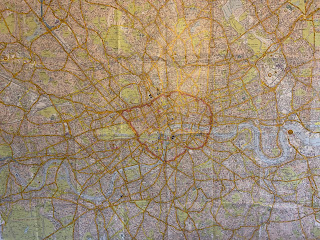 So, in the future you might be able to read about some of these that I have mentioned.
Until Next time, stay safe out there people!
at September 03, 2021 No comments: