The return of the night ride to the coast - Southend

Regular readers will know that I love night rides to the coast. Of course, over the worst of the winter period they quite sensibly have to stop but they returned on Friday with an offering to Southend some 60 or so miles away.

It would be true to say that I had been looking forward to this ride for some time. Even though I tried not to think too much about it, the prospect of the start of a new season of night rides to the coast dominated my thoughts. Everything that needed charging was charged. A range of cycle attire - accounting for all possible weather scenarios - was washed and left in neat piles. Tools, spare tyres and the like were all checked off and ready. You could say I was well prepared. I will come back to this later.

My journey to the new meeting point under Waterloo bridge - rather than Hyde Park Corner - was quick and uneventful. I missed not not being at HPC but part of my route did involve me cycling past and under the arch so I couldn't complain. I arrived in good time and decided to take a few photos of London by night with my iPhone. 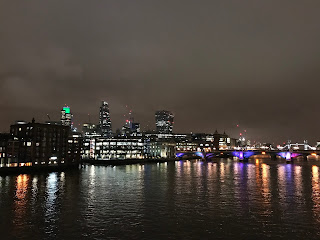 On the Millennium Bridge it was quite busy so I wheeled my bike along, stopping about halfway to take some photos. The local village idiot helpfully informed my that I was not allowed to cycle on the bridge. I asked him if he was a clairvoyant and had seen me cycling a few moments into the future? This proved to be a conversation killer and he walked on. 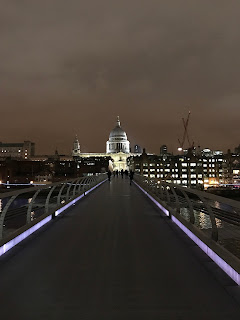 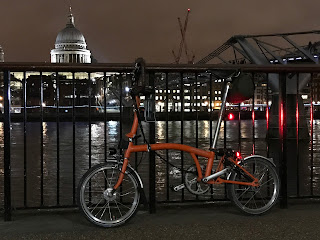 At the meeting point Geoff was already there sporting his pretty fine Ribble Cycles road bike. It was lovely to see him again after what felt like an age. I had decided to take my P-type Brompton. I don't really know why but I had made up my mind about choice of steed as soon as I heard about the date for this ride. 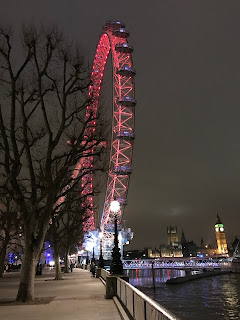 Not long after,  Mark arrived on his Green Brompton and Charlie on his single speed - although at times you would have thought he had several gears judging by his pace. Jenny also arrived her her yellow Brompton and it was good that we had a little Brompton crew participating. Iain - a gentleman among men - was also there sporting his black Brompton. Sadly, David and Anne were unable to make it. 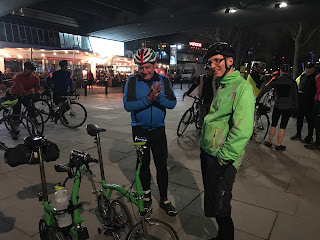 As we got closer to midnight more and more riders started to arrive and Bob - our ride leader - was soon going through the customary  and interactive safety talk. With that done we made the final checks on our bikes, chewed the fat and generally got ourselves as ready as we could. 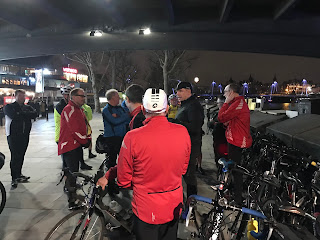 Having a look at some of the bicycles I spied a Condor Heritage in the wonderful Paris Green. This made me think of my own Condor road bike sitting at home. I have to say I missed it as a result! 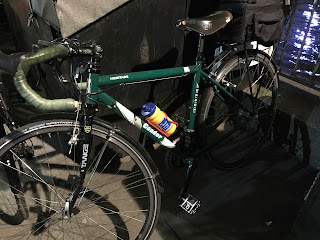 Just after midnight we were off into the night for another nocturnal adventure. This was a gleeful moment. Pedals were clicked into, Garmin devices bleeped into action and the odd bell was rung to signal that we were off. 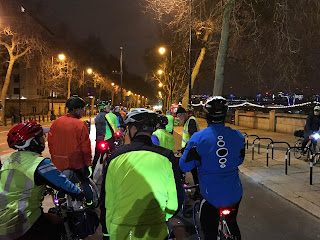 Our journey out of the more urban areas induced a little more of a vocal response from some members of the general public. We got the usual and quite welcome shouts of encouragement or questions about where we were going and what we were doing out cycling so late but we also got some rather aggressive and impatient types in cars shouting out all sorts. Of course this could not take the sparkle off the fact that the night rides to the cast had started again! 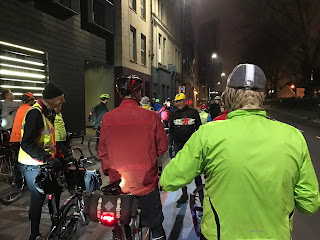 Eventually we arrive at the services at Junction 31. This was more functional that welcoming in many ways, as hardly anything was open and what was did not have a great deal. We were told well in advance about this and having been here on several rides before, I knew this. I only bought a latte. Step forward the stupid one who only packed a lone Snickers bar as his snack. 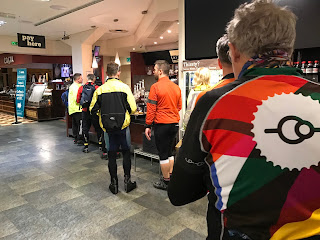 We were at Junction 31 for well over an hour and while there we rested and talked about all sorts before it was time once more to make the second half of the journey to Southend. 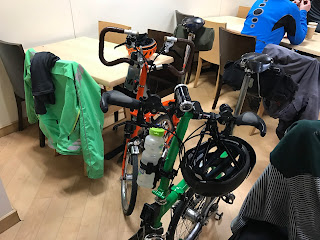 Normally, coming out of the warmth into the early morning means that until you have cycled a few miles you can feel the cold. This morning was different. I didn't feel cold at all and after a few miles felt too hot and had to take one of my base layers off! 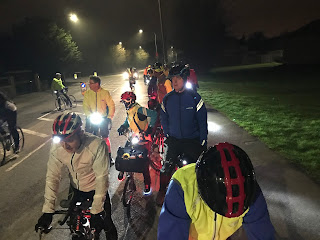 Cycling in the night is not only addictive but in my opinion quite therapeutic. You think about all sorts as you cycle along. You occasionally find yourself cycling along for many miles at a time, following a red tail light in the distance with only yourself for company. Sounds are magnified. You can hear the tyres spinning along, various components of your bicycle working hard and birds singing away, despite it is nowhere near dawn. 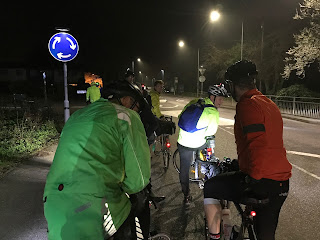 On one stretch a totally silent Barn Owl could be see flying in its ghostly manner before perching on a telegraph pole, not liking it and then flying off again. I fancy we were the only people who would have seen that and all because of a mad idea of cycling through the night to the coast. 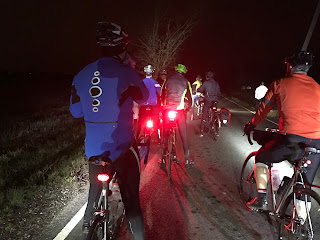 A few miles from Rayleigh my unusual lack of preparation on the nutrition front reared its ugly head. I knew fine well what was happening as I started to feel sleepy and my pace slowed greatly. I was moments away from the dreaded 'bonk' where energy is depleted and you grind to a halt. I had even run out of water having not topped up at the halfway stop.

Luckily, Mark had packed more wisely than I had and had some spare food which got me to Rayleigh where I knew I would be able to buy something from a  newsagents that would almost certainly be open. 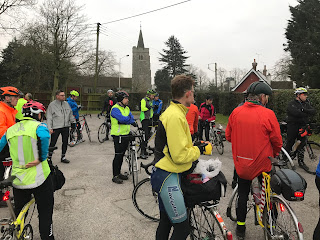 Luckily this is exactly what happened. I managed to buy a could of bars of chocolate which didn't last long. This was all I needed and almost immediately afterwards I felt fine and was able to resume a better pace. As I ascended a few hills after Rayleigh I thought to myself, let that be a lesson to you! 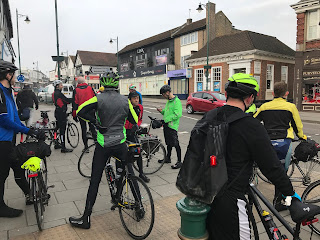 With the back of the rode broken we headed for Southend. The pier in the distance was our target and just after this was 'The Beaches Cafe' where breakfast awaited us.

We arrived not too long after 08:00. A fine breakfast was consumed with enthusiasm and didn't last long. 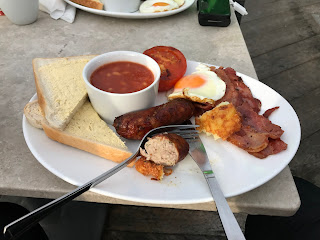 The views from our breakfast spot were brilliant and the famous Southend Pier could be seen snaking into the distance. 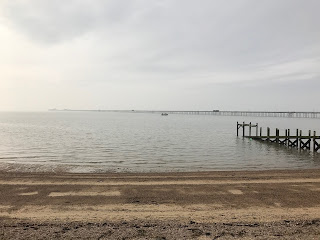 With a job well done out ride leader Bob sat back with the satisfaction of another highly enjoyable and successful ride completed. 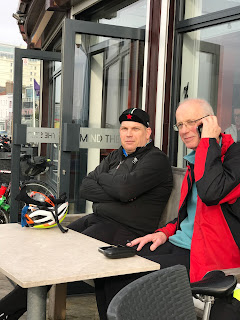 Mark, Geoff and I boarded the 09:18 train from Southend Central. Saying goodbye to Geoff after one stop and Mark one before Fenchurch Street I hoped that it would not be too long before we met up again soon. 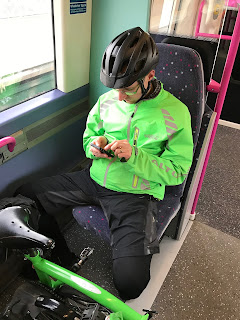 As I looked towards my Brompton I decided that future night rides to the coast would probably the ridden on my my Condor road bike. It is strange that I missed using it so much but I did! 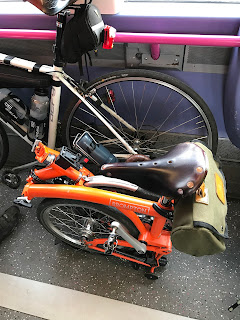 Many thanks to Bob and his team of tail end Charlie's for another well organised and enjoyable ride into the night! Also thanks to Geoff, Mark and Jenny for their company

This was a great ride. I am glad that these rides have started up again and hope that they can be supplemented by a few more adventures in the gaps between them. The next ride to Whitstable - an absolute beauty of a ride - is in about four weeks. Again, I cannot wait!

Today was the day that the tickets for the Tweed Run 2017 went on sale. When I remembered that the start time for purchasing them was 12:00 p.m. I logged on shortly afterwards and managed to get myself a place.

The Tweed Run is a brilliant idea and simply a case of dressing up in as much tweed as one dares and cycling around London, for some on old-style bicycles. You can read about the previous Tweed Runs I have been on by clicking on 'Tweed Run' in the sidebar. There are even some links to video.

In all this will be my 5th Tweed Run having attended in 2012, 2013, 2014 and 2016. I always say that it will be my last however I keep coming back for more. I suspect being a bit of a controlled extrovert (in other words when it suits me and on my terms) it draws me in.

It looks as if this year I might actually be getting a press pass. I will have to see if this comes about but it would be rather nice.

Sadly, as always the tickets for the Tweed Run have all sold out. I get the feeling that they could release triple the amount and still sell out within minutes of release.

This will certainly be a date to look forward to in the diary and I really must get my act together with regards some more tweed! 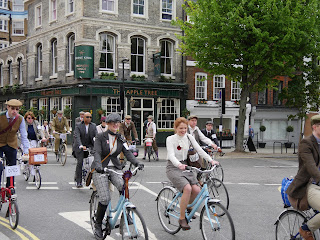