Hello All. Hope that you had a very Merry Christmas.

A bonus Christmas present I got was a second new follower!

Have been on quite a few adventures over Christmas and can't wait to blog about it. So keep watching.

Anyone out there reading this please leave a comment.  I only have one follower so far! (And that follower is totally wonderful and groovy by the way). You might even consider following me perhaps?

Those of you with a bicycle will know that if you use it every day, it does tend to get dirty quite rapidly.  Living in London with the British weather the way it is, this can of course make bicycles filthy. Having spent hundreds of pounds on my beloved Brompton folding bike, I decided I would give the bike a damned good clean.

I lovingly cleaned all the dirt off the tyres and frame and much to the amazement of my onlooking family cleaned the spokes, rims and hub.  Everything was absolutely spotless and in 'as new' condition.  Very proud of myself I got out a tin of 'GT-85' and proceeded to spray the wonders of this lubricant over the chain.  Turning the wheel I could hear the now silky smooth running of a perfectly engineered bike - now cleaned by yours truly.

Feeling slightly guilty - as this had all taken over two hours, I plugged in the Xbox 360 Kinect, opened the tray of the Xbox 360 and put in 'Dance Central' specially designed for the new Kinect.  From the above you will no doubt have guessed that I am of a technology aware disposition. (In other words, I had the first go).

I choose an easy dance to break myself in.  This was, Lady Ga Ga's, 'Poker Face.'  Watching the dancer animated on our television I soon found my stride.  To my surprise I was able to dance and keep in time with the character, who urged me on as I was doing so well.  It then got to a part in the track where I was permitted to, 'freestyle.'  This is where things went terribly wrong.

With a rush of blood to the head I went for it.  All the 80's body popping, robot and semi breakdancing/disco moves were unleashed in an uninhibited and energetic frenzy!  It was when I attempted Michael Jackson's, 'Moonwalk' that I almost felt my last moment had come! (I had been cleaning my Brompton with, 'GT-85.' I did not think to lay down newspaper and what have you, so some of it went directly on to an already polished wooden floor).

The 'Moonwalk' was going better than expected.  Too well in fact.  My feet seemed to have no friction.  I could actually do the 'Moonwalk.' Elated I went for a longer walk and strayed into the danger zone.  I hit the floor, landing straight on my back.  I was okay apart from being totally winded and unable to talk or breathe.  My family at seeing this were in hysterics and were unable to talk or breathe!

If you are going to clean your bike over the holiday please put down some newspaper.  If you don't, you may suffer my fate!
at December 23, 2010 2 comments:

What a strange thing has just happened!

I was riding my trusty Brompton along Pall Mall nonchalantly minding my own business. As I cycled past a number of builders standing on scaffolding, the most peculiar thing occurred.  I heard a wolf whistle.  Being a curious sort of chap, I naturally gazed around to see whom was the object of their sexist taunt. To my surprise I could not see anyone else.  In addition, being so early in the morning there was no one else around.  No pedestrians.  No cars, lorries or buses ebbing and flowing. Nothing?

It then crossed my mind that, I might indeed be the object that caught their attention. Yes, I know that I am a happily married, 40 year old male but given the right lighting I can still turn a head or two. Yes it must have been the black North Face jacket combined with a fluorescent orange wastecoat.  The finishing touch of a pair of Altura over trousers (with Night vision stripes) must have set their pulses on edge as I ambled up Pall Mall.

How did I feel? Well quite flattered really for all of a few seconds.  Of course after an up there is sometimes a down and I thought about things.  I felt quite cheap.  I mean, I have feelings too!  These feelings were compounded as it soon dawned on me that it was not me that induced a wolf whistle from a load of builders (for want of not knowing the collective noun) but my bright orange (with black extremities) Brompton Folding Bike!

You will be pleased to know that I rode on with dignity, despite hearing continued and sustained wolf whistles as I turned into St Jame's Square.
at December 22, 2010 No comments:

That really does open up a few possibilities.
at December 21, 2010 No comments:

Emailing from an iPhone.

Just testing whether I can send an email straight to a blog.
at December 21, 2010 No comments: 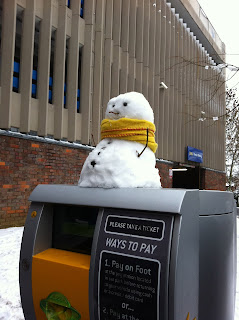 Small but perfectly formed.  A bit like the Brompton.
Well.  Christmas is nearly upon us and I am hoping that Santa leaves me a Brooks saddle for my Brompton.  (I have left enough hints believe me).
With the cold weather and snow, you would automatically think that Brompton users would leave their beloved folding bikes at home.  Not a bit of it.  I have never seen so many.  Perhaps the Brompton rider is more intrepid?  Last Saturday I happened to be out on my Brompton when the snow really came down.  I felt like, Sir Ranulp Fiennes on one of his daring polar expeditions.  I must say that my decision to opt for 'Schwalbe Marathon' was a a good one as they are excellent in the wet and as it happens, the snow.
My C bag with rain cover has proved to be a Godsend.  Quite amazing how much it can hold and even better how it sits happily on the front carrier block not at all getting in the way.  I got mine from, the  'Brilliant Bikes' website.
For those of you out there who need to buy the odd Brompton accessory or spare part I can wholeheartedly    recommend, 'Brilliant Bikes.' http://www.brilliantbikes.co.uk/  Like their name they are brilliant.  I have ordered a Brompton light set, extended seat pillar and a Brompton C bag set and all have been dispatched with speed and efficiency.  I only wish that all online companies were as good!
(I will try and do a review of the Brompton light set and C bag at some point as there doesn't seem to be too many out there in internet land).
at December 21, 2010 1 comment: