As an owner of an Orange Black Edition I noticed that Brompton has decided to release a few black editions again. This time there is a difference.

A few colours are the same - Black and Turkish Green - but joining them is one in a rather fetching Rocket Red. For my money this is the best of the bunch for this launch.

The biggest difference to the Black Editions is that you can now get the Superlight version with the titanium parts painted black - a theme borrowed from the CHPT3 edition. If you like the idea of shaving off approaching 1kg of the standard Brompton then this might be your thing. I owned an Orange Superlight a few years ago and put lots of black part on it - apart from the titanium bits - but hated it, so for me at least this is way better.

As always with the Black Editions, if you are in the market for your first Brompton or getting a second, I'd commit to buying one of these sooner rather than later as they always seem to sell out after a while.

Until next time, happy pedalling.


Link to the Brompton website for details of their Black Editions
at November 23, 2019 No comments:

Friday night is the start of the weekend. Going into central London you will see people letting their hair down - and sometimes a great deal more - as the working week for most has come to an end. I however associate Friday nights in central London with the start of a night ride to the coast and last Friday was no such exception.

The meet up point was was Hyde Park Corner which brought back fond memories as it used to be the start of many of my first foray into nocturnal cycling to the coast. Sadly Dr John looked as if the weather / time of the year had out him off so didn't come. The ride was actually the idea of my old friend Tom, who had left his Brompton Chpt3 at home in favour of one of his usual mountain bikes.

This time I set off with my wallet, plenty of cash and my mobile phone, as did Tom! (Read my recent blog post about a Southend run to find out why this was important if you have not already).

Earlier in the day/early evening it had been raining but as we set off it stayed away. In fact there was very little in the way of rain for the entire ride. It was chilly - well it is November - but Dr John pointing out that almost at the same point last year we had done the Brighton run in short sleeves! For this ride we both had a few layers on and winter cycling gear out in force.

London looked - as always - resplendent. Despite the chill and the earlier rain, it was busy and there seemed to be lots more people out and about than there normally is at this time.

Our pace was conversational and we caught up on things and as always when two old friends get together, took a walk down memory lane. At times the two of us were in hysterics at some of these memories and had to actually stop pedalling.

As soon as we passed Clapham the ride took on a different vide. From this point it was almost as if the urban was left behind. Traffic got less and less to the point that cars etc.., were a rare sight. Climbing up and reaching the cattle grid with views of Croydon was quite eerie as the first of many blankets of fog hung around us. At times it was a little like a Hammer Horror set and our front lights were rendered next to useless at illuminating the path ahead. The light they produced bounced off the fog and offered little insight to what lay ahead. A full moon, dogs howling in the distance and owls hooting all added to this rather gothic atmosphere.

The halfway stop was at just over 25 miles. Tom had brought enough food with him to feed an army and this we ate outside the Scout Hut at Horley. Tom had a pannier rack and bag, in which he had the secret weapon - a 2 litre thermos flask with hot water therein. (This brought back memories of Geoff doing the same on a ride to Burnham on Crouch). After a tea and coffee and some lovely food we were off again.

Turners Hill was about 8 miles from the halfway stop. I ascended pretty quickly but Tom with a massive rear cassette - the biggest ring of which looked like an old 12 inch - meant he motored up with ease.

One of the great things about night rides is cycling along with few distractions. The only thing to hear is the sound one ones bicycle and any nature lurking around either outraged at being disturbed or simply letting you know it is there. At these moments you think about all sorts and have - to use a modern word - headspace.

The moon was our contact companion and as we approached the 50 mile mark Ditchling Beacon was but a step away. Reaching the carpark at the base of the Beacon we readied ourselves. Again I made good time up the Beacon but I simply went at my pace. Tom's incredible gearing meant he could have  almost ascended a vertical climb but he found that he was spinning quite a bit until he found the gear he liked.

We did it. With the Beacon done we cycled the last few miles into Brighton central. This is a very pleasant few miles as almost all of it is downhill and freewheeling. At Brighton we headed for the station where we bought a coffee and a bite to eat. Our train journey back to London was quick and we more or less had the carriage to ourselves for the entire journey.

Back in London we said our goodbyes and went our separate ways. Tom invited me to join him on one of his nocturnal off-road adventures as he prefers them to road cycling. That was a maybe from me as I prefer road cycling. Many thanks for the invite and the company.

I titled this as my last nocturnal ride to the coast for 2019. I am toying with the notion of doing one more - probably London to Brighton. I love this route and getting back into London is a doddle. I will have to have a think about this one though. Until next time...
at November 17, 2019 1 comment:

Brompton recently announced that is was bringing '...back by popular demand..' its ever popular 'Signal Orange.' As you can appreciate I was rather pleased about this.

A few years ago Brompton took the decision to discontinue orange as a colour you could choose to have your Brompton in. At the time I raised an eyebrow to this and could never quite understand their logic. Several months later orange was back as a 'Special Edition' and yours truly bought one. More recently there has also been the introduction of 'Flame Lacquer' that I absolutely love.

I do wonder when Brompton will bring back the option to have a Brompton in yellow? It too has been discontinued and not even available as a special edition. I have a friend who would be very please if they did.

So, if you are in the market for a new Brompton, orange could be a option for your shopping list. Just remember though, there is only one Mr Orange! 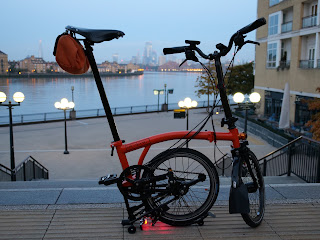