As you may know I have been off the Brompton for a few weeks and will be for a few more. I have therefore had to walk to and from work and just about everywhere else. In the past few weeks as a pedestrian I thought I would write down a few observations.

There is nothing new perhaps in what I am going to write first but I have to say motorists do look a miserable lot. I do feel sorry for them as they sit in an endless queue of traffic that does not seem to move. Cyclists and even me on foot seem to get from A to B quicker. It is bad enough in the morning rush hour but it seems magnified by the time people are making their way home.

As with cycling, I have to report that walking does seem to offer the same benefits of unwinding from a hard day at work. Normally I tend to listen to a downloaded podcast - Desert Island Dics, Great Lives or something from Londist Out Loud both wlakgn to and from work. When I return to cycling I will miss this aspect.

Cars do seem to rule the road. Zebra crossings do seem optional and more often than not us pedestrians  are left waiting with cars streaming by. I even witnessed one pedestrian getting a mouthful from a car driver as they had not indicated their thanks to the car driver who stopped for them to cross.

On my route to and from work there is a good amount of cyclists who do not use the road at all and simply cycle on the pavement. Some do this at a snails pace and are obviously conscious that they should not be doing this. Others are cycling at speed and certainly as fast as they would if on the road.

Sadly with the days getting shorter I have also seen more than a few cyclists riding on the road with no lights. In addition to this they have no reflective elements whatsoever. This renders them all but invisible and I for one do not understand why they do it? You can buy a decent set of lights for £9.99.

One thing I have found amusing is that pedestrians do not seem to walk the street on one side of the pavement and up the other - a bit light the direction of traffic on the road - but walk whether it takes their fancy. With people talking into their smartphones, looking at their smartphones or listening to something on said smartphone occasionally, like a game of chess there is En passant. There is the customary and very British, 'sorry' which actually means 'get the *@£! out of my way!'

My last observation is just how many more cyclists there are out there. When cycling I do of course see lots but perhaps with the slower pace of walking I seem to have had the time to see a great deal more. There are loads! It is just a shame the infrastructure isn't yet there to cater for them.

When I am eventually allowed / able to cycle I won't miss being a pedestrian and for me at least it really is the most efficient way to commute.

Every so often I see something cycling related that puts a smile on my face. When I saw a few adverts for big bobble hats in all sorts of colours, I knew on sight that it would be something I would instantly take a shine to.

Thankfully, when I opened the package from the lovely people a www.bigbobblehats.co.uk I managed to do so without causing any more serious injuries to myself!

The hats are a traditional type of bobble hat often knitted by grannies up and down the country. If like me you might remember winding lengths of wool around cardboard disks and eventually perform near magic to great a multicoloured wool pompom.

I always wear a cycling helmet but have taken to always carrying a cycling cap with me when I take it off so that I do not have to endure the stares of onlookers at my helmet hair. Even though I do like these I knew that for the the colder months the extra warmth afforded by these bobble hats would be a welcome bonus.

I was kindly sent two hats for review purposes. One is in Dutch colours and the the other Italian. I have to report I instantly loved them. 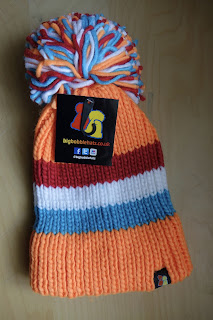 They are a universal size that will fit just about any head size be that man, woman or child. The quality is very high and and as well as looking good the practicality of keeping your head warm is obviously there. 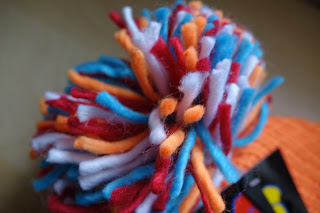 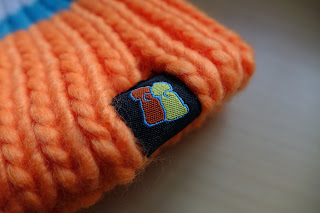 You might be aware that I am unable to cycle at the moment and unable to drive until I am given the all clear that my hand is healed to a satisfactory level. This has meant I have had to walk everywhere! I have to walk to work earlier than normal and return home later that I would otherwise and I have loved feeling warm and cosy. 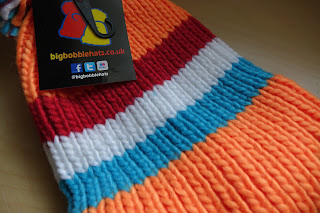 The hats cost £20 each or if buying two you can get them for or £17.50 each. Postage and packing is free and delivery was very fast for me. 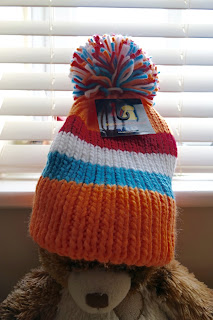 The Italian flag hat was swiftly taken away by one of my Orangettes and I have resigned myself to never seeing it again. 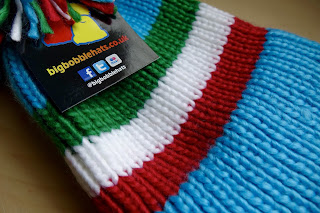 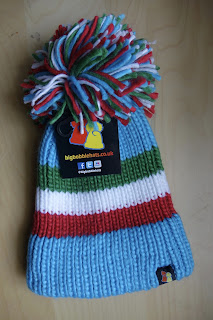 When they need a wash it is recommended that you hand wash in cold water. I have done this on the Dutch hat and all was well as far as colour and the hat keeping its shape. 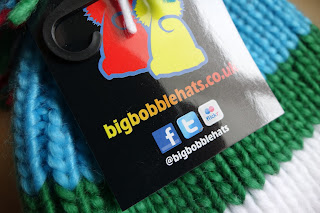 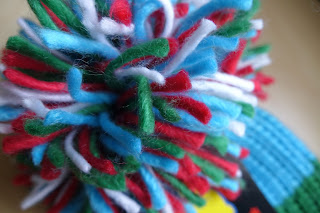 There was an option to design your own hat in terms of colour and this might come back at some point in the future perhaps. In any event there are lots and lots of different colours and designs to choose from and I would imagine these will be added to over the coming months. 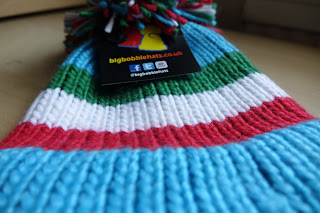 During the colder months - once I am cycling again - I will be abandoning the usual cycling hat for my Dutch bobble hat. Of course they won't fit under a cycle helmet but I would only ever use it when the lid is off and I'm standing around having snack. 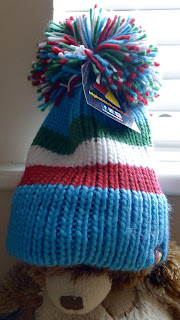 Many thanks to the people at big bobble hat for sending me these great hats. Below you will find another link to their website. Definitely check them out to see what takes your fancy. I'm sure you'd find a colour combination you would like.

Opening a package the painful way!

First of all hello dear readers. It has been a long time since I wrote anything but as you will discover by reading on, I have neither been able nor had the inclination to do so.

Way back in the middle of October I got home from a really great club ride to find a brand new Brooks saddle as part of my Titanium Orange Brompton makeover to a fully nocturnal beast. Still in my cycling attire I opened said package with a kitchen knife. Not just any old kitchen knife an incredibly sharp 10 inch variety. Can you guess what happened next?

Yes, I became a statistic. I managed to stab the base of my left hand with said knife. There was quite literally blood everywhere, so wrapping my hand in a tea towel and elevating my hand above my heart, I called for Mrs Orange to ring her dad as I needed a trip to the hospital.

The first one was a minor injuries unit. After a local anaesthetic, tetanus, X-ray, a course of antibiotics and much prodding around I was sent to the only plastic surgery unit open at this time of night - 18:00. Once there after waiting almost three hours I was given more local anaesthetic and on the receiving end of more prodding around with tweezers  and other metal implements. An appointment was made for an operation the following week in order to see if tendons had been cut.

The operation, with me still very much awake went okay and after even more prodding around the surgeon informed me that no tendons were cut. The sizeable cut in the muscle bed was stitched up and then the skin stitched. The mother of all bandages were put on my hand and I was free to return home.

The stitches were taken out only a few days ago and my hand it still supported by a custom made plastic splint. I have light exercises to do four times a day and will see the surgeon again at the beginning of December.

This has of course meant that I am not only off my beloved Brompton bikes but unable to drive. I have done quite a lot of walking lately!

It will still be some time until I am on my bike again but I hope to make my return to the fold before Christmas.

I really do feel like a total idiot for all of this but I only have myself to blame. It is a good job I have sunny disposition and I have taken great delight in telling every person who has inquired what happened to me, a totally different story!

I have attempted to type previously but my hand was either too sore or unwieldy with such a huge bandage on.

So, there you have it. Many thanks to all you very kind people who have been emailing me to ask if I was okay or whether I have stopped writing my blog. I am fine and no I have not stopped. I hope to be back in the swing of things pretty soon and I have loads of blog posts to do with lots of great bicycle items to review - despite the fact I cannot use them at the moment!