The Box Hill adventure last Friday was a lovely, lovely ride...perhaps too lovely! There were times on the ride back to Kew Gardens where things felt a little like a night ride to the coast. The season for these rides was set to begin at the start of March and naturally you can guess why they have been abandoned.


The photo below was taken on 6th July last year at 04:22 in the a.m. As we cycled along this quiet country lane the air was fresh but it was still warm enough for short sleeves. No one else apart from us occupied the winding lanes we cycled on. The dawn chorus was in full flurry and a variety of songs could he heard, almost providing a free concert to those crazy enough to be up to hear it. 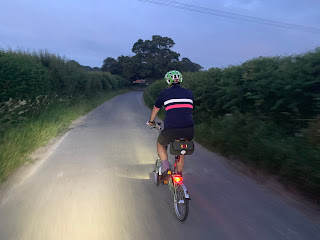 A little further on, probably less than 10 minutes earlier, we the sun shining though a gap the trees, rendering such a pretty scene we felt compelled to stop, take a few photos and simply stand there watching while we had an impromptu pit stop. 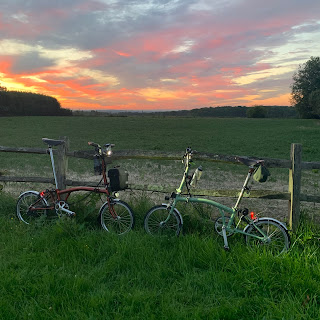 Not long after that we arrived at the base of Ditchling Beacon and even when we had made our ascent the scene that greeted us competed with everything we had seen before.

I do miss this ride and the company of Dr John as we clock up the miles and cycle along chatting away for hours - taking about Brompton bikes, cycling in general, the world and what is going on it it and winding each other up with friendly banter the way friends do. There are no Strava records to beaten, just the simple pleasures of a challenging but highly enjoyable social ride.

So, I now wonder when it would be safe to embark upon such an adventure again? We would need to get on a train bound for London and wear face masks but the time we would leave Brighton, or wherever it was we were leaving from, would be so early it is going to be just us, a couple of other passengers and the driver! 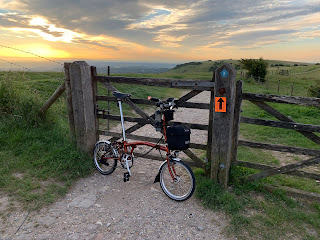 I will have to look into this a little more closely and see when it is feasible to go on another nocturnal adventure. 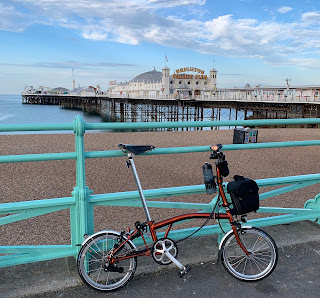