My Orange Brompton back to factory settings

You may have read my recent blog post in which I toyed with the notion of taking the dynamo lights off my bike as well as swap the front SON dynamo wheel out. Well, today I made the changes.

Okay what have I done? First I removed the Edulux II front dynamo light and bracket and replaced it with the stock front reflector. Next the rear SON, LED light was removed in favour of the standard Brompton Spanniga Solo battery light with incorporated rear reflector.

The Edulux II front light is actually pretty good but I have would not have and have not relied on it alone to illuminate the path ahead. The rear SON light is nice and bright but does not have a rear reflector and the one that you can get for it - which I used - was a total pain as it sat too high and always scraped on the floor making that annoying fingernails down a chalkboard sound when the bike was folded. In fact in was cracked down the middle as a direct result of this.

The SON dynamo wheel I replaced with a black extra light version front wheel - the same one that is fitted on the CHPT3.  This has the hollow axle, secured with an allen bolt and the closest thing Brompton has to a quick release. 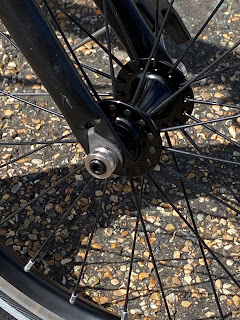 It was also time to change the chain and rear sprockets so a new set were put on and things do feel a little better as a result.

The last change was to put the front carrier block back on. I will now finally be able to choose at will one of the many Brompton from bags I have at my disposal. With a working front carrier block the saddlebag was removed - for the moment at least.

It was really great to be finally able to use a front bag on the carrier block again!  I really did have to think hard which bag to take. I have a Mini-O in black and orange, the new Borough (which I think is the best of the bunch by a mile) and black Mini-O with reflective dots.

As for illumination, I am not short of options. I have the Exposure Toro which is a beast and can happily pump out several hundred lumens for almost 10x hours - more than I would ever need. Once light I have had for a while but not actually used a great deal is a Lezyne light that isn't that big or heavy and yet can pump out 450 lumens for 8 hours - and possibly more. I also have an even beefier Lezyne light in the form of the Mega Drive so I am spoilt for choice.

I will be keeping the SON dynamo wheel and the set of dynamo lights as hey I might put them on again at some point. For me at least I am happy with the no dynamo setup.

Taking it all out for a 20 mile spin in which I encountered lots of the hills of North London, I cannot really say that there is a huge difference in the bike. It does feel a little lighter and that Superlight front wheel spins so freely it was as if the bike rolled a little better.

You could say that my Brompton is now back to factory settings.