North London hills on a Brompton

Yesterday I was up early and headed out for a spin on my back to factory settings Brompton - SON dynamo hub wheel and dynamo lights taken off. It was a lovely morning with the sun peaking through wispy clouds that floated by on a gentle breeze.

My route to Alexandra Palace involved quite a few hills and I certainly worked hard to get there. The view were wonderful! It was not hot enough for there to be a haze in the distance and as such the buildings of central London and Canary Wharf could all be made out pretty clearly. 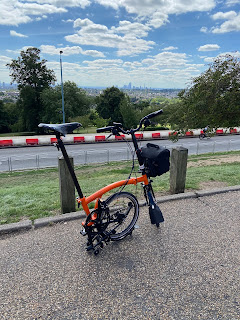 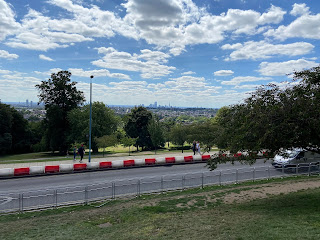 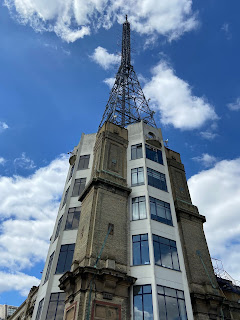 Naturally, I stopped to take a few photos and then retired to a nearby tree stump to have a drink of water and graze on a flapjack Mrs Orange had made with the Orangettes. 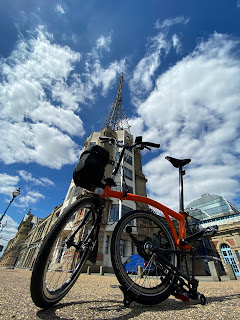 I paid a quick visit to Belsize Park and my route from Alexandra Palace took me through Hampstead Heath and near Hampstead Hight Street.

Now I will quite possibly lose some readers over what I am about to write but here goes - and yes I know that I am generalising terribly. I am not a fan of Hampstead. In my book it is perhaps one of the most pretentious places in London.

I am not a customer or fan of McDonald's (yes the Golden Arches) but when in 1993 - after 12 years of battling the residents of Hampstead who rabidly opposed it - McDonald's opened at the top of Hampstead High Street I could not help but chuckle. I remember going out of my way there near the Christmas it first opened to buy a tea and stand outside drinking it.

Arriving at Belsize Park I stopped off for a cup of tea - one of the benefits of having several relatives and friends who live in and around London - and managed to come home with the Le Creuset mug I had been given. Yes it was orange! 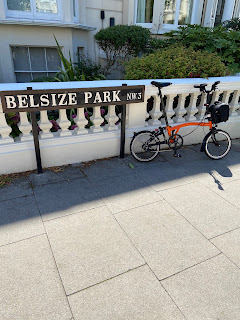 Feeling rather pleased with my posh mug and the fact I had my Mini-O bag to carry it home safely I cycled to a nearby tube station and them on to home. (I'll be going back there soon to get their tea pot which is in the same fetching orange)! In all I cycled just over 20 miles and I have to say I enjoyed every minute!