First journey on public transport with my Brompton

After cycling 85 miles on Friday night into Saturday morning I felt pretty good. Much to my surprise, after the benefits of a good nights sleep, my body wasn't sending any signals that it needed to rest. Despite this I decided to take the precaution of reporting to public transport to get back from a 10 mile early morning spin in central London.

I could have easily cycled back as it wasn't too far but decide to bite the bullet and take the tube. With my face mask at the ready I tapped in and ventured onto the platform. It was early but not stupidly so and I was one of three other people waiting for the next train. When it arrived I could see that the carriages were empty as they rolled past. I got on to find that there were only two other people on the length of two carriages.

One of the plus points of owning a Brompton is that if things had of been a little too busy for my liking, I would have taken my bike up and outside, unfolded and been off.

As the journey continued only another five people got on for the rest of the time I was on the train. It was all unexpected and quite eerie. This bodes rather well as towards the end of next week I plan to do my first London to Brighton of the year.  I am hoping that at the time I get my train for London it will be equally sparse.

It did feel rather strange to be sitting on a tube train wearing a face mask and my one felt a little like amateur hour compared to some of the ones I saw on offer, some of which would not be out of place on the set of a Star Wars movie! I suppose this is the new normal...for the foreseeable future at least! 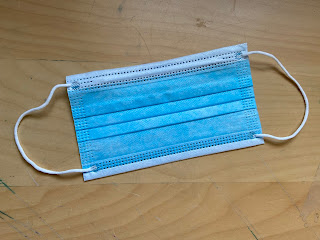