Almost a week ago I posted a blog post in which I contemplated putting the original Brompton pedals back on to my Flame Lacquer. I have posted a link to that blog post below if you have not seen it already.

I did put the original pedals on for all of one quick test ride and I didn't like them at all. Compared to the very firm platform afforded by SPD pedals and shoes, they felt a little spongy. So it was a case of back to the drawing board.

A few internet searches later and I found a pedal in the form of the 'Shimano SPD PD-T8000 Deore XT' but at around £60 - 70 a pop were too expensive. Searching a little further I found a pair that were billed as coming without a box for £24.99 but otherwise brand new. I took a punt and ordered them.

They arrived a few days later - despite the 'C' word locking almost everything down and I was pleasantly surprised. The box the pedals came in was damaged but still there. The pedals were definitely new.

I have had a pair of XT pedals before and always liked them. The sealed bearings are pretty much fit and forget. 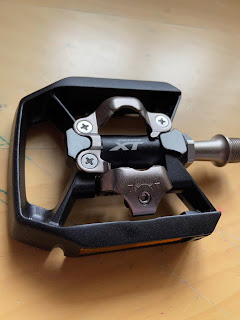 One side has the SPD pedal and the other side doesn't. This has 8x little screw in studs that are surprisingly grippy.  The reflectors within the alloy cage are a bonus. 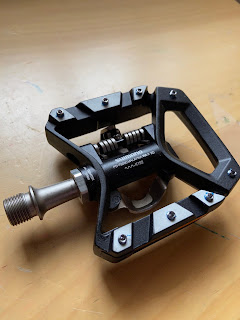 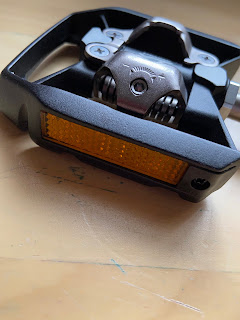 A set of SPD cleats and extra set of studs is always welcome. 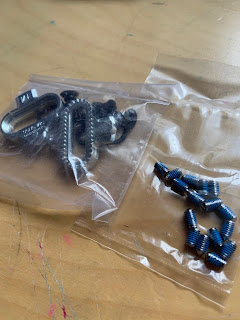 With the pedals fitted I went out for another test ride. My only concern was that being only one sided for each, would they be difficult to engage the correct side when using SPD shoes and non-SPD shoes? I need not have worried and whether wearing SPD shoes or trainers, I always found the correct side pretty fast.

The only downside is of course the left pedal not folding and there fact that they extend about 1cm further out that my current pedals. The plus points the the very stable platform for non-SPD shoes, the build in reflectors and overall convenience.

For £60 - 70 I would give them a miss - although they are among the best double-sided pedals with reflectors - but for what I paid I am more than happy.