Like many of you out there I have been trying to get my daily dose of exercise. For my daily exercise allowance I have followed the advice and kept local to where I live.

My route involves me doing circuits of the crescent that starts outside my front door and is roughly 0.7 of a mile to complete. I normally cycle until I have reached five miles - which takes 20 roughly minutes - and then call it a day. I keep my ride to under 30 minutes for more the sake of convenience than anything else.

My route is quiet at the best of times but even more so now, with only people walking, walking their dogs, joggers and an occasional cyclists to be seen. Each circuit has a small hill of about 200 metres in length which adds a little something to proceedings.

I have tried to alternate which of my Brompton bicycles I take with me and as yet have not taken either of my two big-wheeled bicycles out at all. (I probably will if and when it rains as who want to get their beloved Brompton wet unnecessarily)!

Many weeks ago my friend Dr John and I had arranged to go on another duo nocturnal adventure - probably London to Brighton - which would have been tonight going in to tomorrow morning. Sadly this is of course not going to happen and I suspect it will be several weeks before it will. As I cycled round thoughts did turn to this ride and little snippets of it replayed in my head.

One elderly couple has been out walking circuits as I have been cycling. We have said hello as we have passed each other. Yesterday they shouted out questions they had about my Brompton as I passed them on my circuits. After this happened a couple of times I stopped and keeping safe distance I answered questions about the Brompton and cycling in general. They said that they have a pretty good exercise bike at home and they both use it to complete virtual challenges. They have both used their exercise bike to complete some quite amazing distances to keep fit. They told me about the almost 300 mile Grand Canyon challenge, 90 mile Hadrian's Wall and the one they are working on now is the virtual Lands End to John O'Groats!

When I was out today they showed me one of the medals (they had one each) that you get for completing the challenges. I have to say that it was a Bobby Dazzler and Mr T would have been quite pleased to have had it round his neck back in the 1980's!! Perhaps tomorrow I should take my three Brompton World Championships medals for competing the 'Brompton Triple!'

Whatever you are doing to cope with the lockdown, wherever you live, keep safe and stay positive. Hopefully we will all get through this and to the other side. For me at the moment the thing I am looking forward to most is being able to smell the sea air after a night ride from central London. 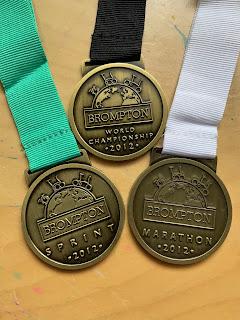