Navigation on a Brompton

If you have read some of my back catalogue as it were, you will know that navigation has been something I have struggled with in the past. This isn't anything new. As I young rapscallion, I remember being lost in Hyde Park - a location I was supposed to know extremely well - once and almost having to be recused. Things were not really a great deal better when I bought a Garmin 800 and 810. While many could use them quite happily to navigate to almost anywhere, yours truly found it all but impossible.

Using my iPhone and Google maps was much more successful but less than ideal. Added to this was the possibility of the battery running out on my phone. It wasn't until I bought a Wahoo Elemnt that things really did take off in a big way for me in terms of navigation.

Using the Wahoo together with the app/website 'Ride with GPS' I found that I could actually navigate. I remember trying this out on short journeys and then attempting longer ones like Kew Gardens to Box Hill and back. The elation at being able to actually do this was great.

Of course what I really wanted to do was a night ride to the coast. Eventually I summoned up enough ginger to have a go and took Dr John with me. We made it all the way from Central London to Brighton without a wrong turn.

Since them I have done several night rides too the coast as well as several rides where I have not had a clue how to get there but put faith in my Wahoo. Invariably is has and provided a very cycle-friendly route.

The Wahoo spits out a route so much faster than the Garmin devices I used to own making the Garmin 800 and 810 appear as if they had come from the early 1990s. The route may not alway be the quickest but as already mentioned it is very cycle friendly, normally on a much quieter roads.

With the addition of 'Ride with GPS' I can search lots of different existing rides people have been on to all sorts of places and have them on my Wahoo faster than it takes me to turn it on.

So now I can actually navigate - using a trusty Wahoo Roam that is! 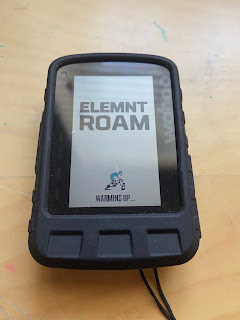