Daily Exercise to Harrow on the Hill

Today my allotted one form of exercise took on a very different turn. I usually carry a fountain pen with me at all times and when I reached into my Mini O bag I discovered that I was carrying a rather rare pen made by the no longer with us company called 'Conway Stewart.' The pen in question was the 'Winston' named after the politician of the same name and after a few moments thought I decided that if I cycled fast enough I could make it to the location of his former school, Harrow.

It was a lovely day and my route there - and back - was almost devoid of cars. There were a few other cyclists around and a few people doing what I was doing (although not with a fountain pen)!

The road leading up to the main school buildings and St. Mary's Church, the spire of which can be seen from miles and miles away, is very steep and gets to 14% in places. It isn't that long but I did enjoy ascending it a great deal.

I have not been here since I was about 13 or 14 and the place hasn't really changed a great deal. It is dominated by St.Mary's Church. Being the highest building in Middlesex you can see Central London and on a clear day such as today I could just make out Canary Wharf. 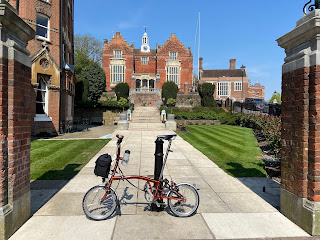 Sir Winston Churchill went to Harrow school in 1888 and was in the Head Master's house and didn't particularly enjoy his time there. Still, he was the right person for the job when he became Prime Minister in 1942.

If you go to this location in term time when the school is open, you will see boys with their ghastly Harrow Hats made out of straw but a step away from something Worzel Gummidge might have worn. Saying that travel a few nile away to Eton and you will see them wearing those godawful tailcoats that make them look like overdressed undertakers.

The church grounds were very peaceful and I came away with the feeling that back in 1572 they really did pick a wonderful location. 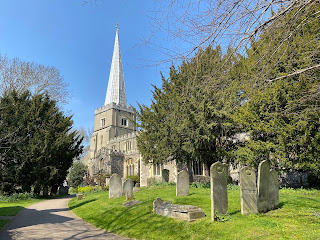 Today I didn't wear any cycling specific clothing and opted for civvies instead while out on my Orange Flame Lacquer. I quite enjoyed this change. A gentleman walking with his two children enquired about my bicycle. From a safe distance I told him about it. When he asked the obvious question, how far can you comfortably cycle on it, I told him about doing London to Brighton, London to Whitstable etc.., and I am not sure he believed me. 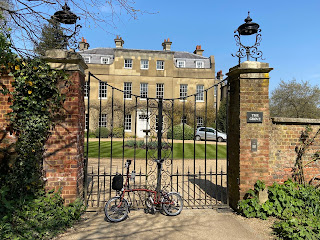 Cycling back I was a gleeful experience in this lovely weather. As I cycled long I thought about where I might be able to go tomorrow for my daily exercise and whether I would take my Orange, Black Special Edition? 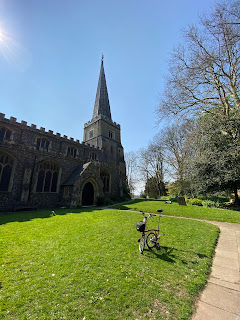