Why a Brooks saddle for your Brompton?

The stock Brompton saddle is pretty good for shortish journeys and I really do like the little ergonomic carrying grip it has under the nose but for me at least I found it to be hard and uncomfortable for longer rides. Step forward Brooks.

At the moment I have the following Brooks saddles on my Brompton bicycles: 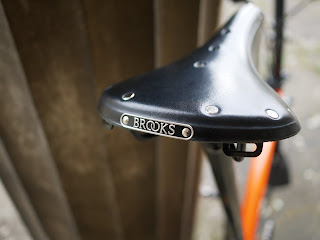 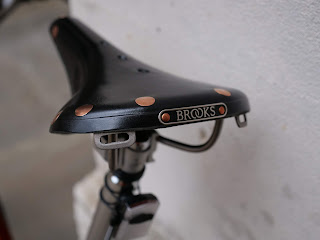 If I talk about the saddles on my Brompton bikes over the years I have never used any other saddle other than the B17. Normally I have gone for the 'Special Edition' versions which have the lovely copper rivets and for reasons unknown, they have all required nothing in the way of breaking in and been comfortable as soon as I started riding. Incidentally, the same could not be said of the standard B17 which believe me did!

Over time the leather on a Brooks saddles really does mould itself into the shape of the its owners posterior end and this making the whole cycling lark that bit more enjoyable. The only thing you have to do from time to time is rub in a little proof hide. I have met people with B17 saddles that have been around for 35 years and still going strong - they really do last. Many take their trusty saddle with them to their new bicycles when the time comes.

I suppose the big draw is that Brompton is a British bicycle and Brooks is seen in the same light. They complement each other really, really well. A Brompton is almost incomplete without one. The build in saddle bag loops means you can attach a Carradice or even Brooks saddle bag to enhance this vibe even further. 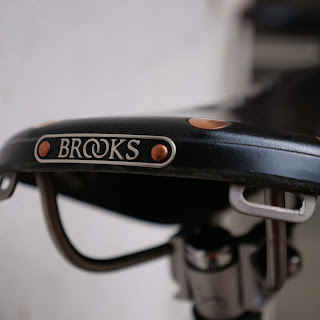 Of course there are some negatives. You can get cheaper saddles however it really is a case of buy once with a Brooks. They are much heavier than some carbon fibre razor blades oft seen on road bikes. Of course a Brompton - made primarily of steel - ins't exactly a lightweight, so does this really matter?

I would not use anything other than a B17 on my Brompton. They have served me well. Personally, I would pay that little bit more for the 'Special Edition' versions. I do thing they look a little better with those orange copper rivets and as I have written, for reasons unknown to me, with absolutely no proof whatsoever, they have been more comfortable out of the box.
at April 18, 2020