Never say, 'see you at the top' to a Brompton user!!

After a chat with my friend Dr John, today for my daily exercise fix I again took out my Orange Flame Lacquer. Yesterday, I  enjoyed the rather quick pace needed to try and get to and from Harrow on the Hill in a reasonable time and not take advantage of the lockdown guidance.

I had the roads pretty much to myself and for the second day running wore civvies - pastel pink shorts and a white polo shirt. When I reached the high street and could see the first of the school buildings, this colour combination seemed rather apt as if memory serves me the colours of Churchill's House when at the school was pink and white. 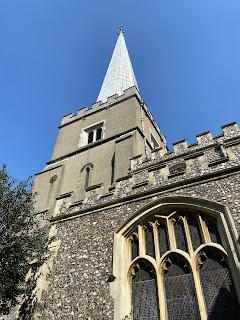 Again I very much enjoyed the climb up to the the church at the top and if anything it felt much hotter than yesterday. I was glad of the water I had brought with me. When I gazed westward into the distance to where I knew Canary Wharf was supposed to be, all I could see was a hazy glare of buildings all merged into one.

Doing a circuit at the top of the church I headed back down a very (and I do mean very) steep little footpath. Gingerly I took a photo - which does not do its steepness justice in any way - before carefully making my way to the bottom. I think you can predict that when I reached the bottom I had to give this a go.

As I got myself ready, a man clad in tight fitting Lycra and sitting on an expensive looking carbon fibre number went past and in a mocking fashion uttered the words, ‘see you at the top.' Sadly in spitting distance of Holy ground and on Good Friday I thought, prat.

I set off behind him with no intentions to race him as it was a battle I would not win on 16 inch wheels and 6x gears. Anyway I was merely doing this for the personal challenge. Imagine the look on my face when the roadie wobbled, was out of his seat, ground to a halt, put a foot down and held on with his left hand to the wall to steady himself. I merely cycled past, saying nothing but dinging my bell and reached the top.

To be fair, I suspect that the roadie had got into the wrong gear or done something silly like trying to change ring when ascending which caused the issues he had. Of course maybe he did none of these things. Still, a scalp is a scalp and his was well and truly taken. After taking in the views at the top one last time and having a swig of water I headed back in the glorious sunshine. 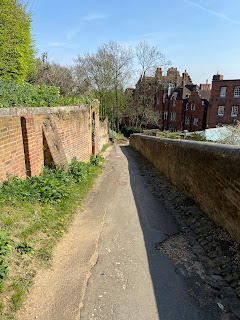