Orange Brompton Blast from the past #4 - Surrey Hills

I cannot remember when I first met the lovely people that are David and Anne. Over the years we have been on countless Brompton adventures together. In fact I could list a blast from the past featuring a 'David' ride  every day for the next two months...quite easily. 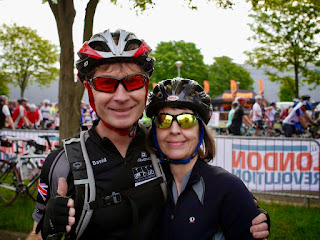 The rides have dried up in terms of their frequency and the 'old crowd' have - like a successful group from the 1980's - moved on to other projects. However, we still go on rides together occasionally and it is always lovely to see them when we do.

As I indicated there are so many rides I could mention. The time in the middle of the night as I was cycling to Box Hill my chain snapped and David attempted to push me along. The time when we went along one of David's legendary routes where the mud was so thick, a tank would have had trouble. The time when we could not get home from a lovely ride to Whitstable as a fight broke out on the train we were on and anarchy ensued. Or the time when our route took us perilously close to a train track and Anne and I feared that we may appear as a new story in the local press!

This blast from the past was when we tested our Brompton bicycles on Box Hill and Leith Hill - two hills featured in the Ride 100. As so often is the case when David is leading a ride, the photo below was a common and welcome sight - me trying to keep up with David, while having a nice chat with Anne.

As with the other blasts from the pasts, it is strange to think that such lasting friendships could be forged from a small. folding bicycle with 16 inch wheels!