Why I sold my Titanium Orange Brompton

A few people via this blog and a couple on Instagram have asked my opinion on Titanium or Steel as far as all things Brompton are concerned. So, here are my thoughts as in the past I owned a Superlight.

It was way back in 2013 that I bought my first and only Superlight Brompton with the rather lovely titanium fork, rear triangle and stays for the mudguards. Mine was an M6L X. Naturally it cost more than the standard steel Brompton but as soon as I collected it from Compton Cycles - along with Brilliant Bikes - possibly the best Brompton dealers ever, it felt much lighter. That 'much lighter' equates to getting on for 800g. Doesn't sound like a great deal but it counts.

Where possible this bike never saw a bead of rainwater and I loved it. It is said that the Superlight version rides a little differently to the steel version, with the titanium soaking up some of the vibrations. This was true to some extend but not so noticeable to me that it would have made me rush out to buy one for that reason.

Back in 2013 and 2014 entry to the Brompton World Championships was pretty much guaranteed and held a the Goodwood Race Circuit for both of these years. In 2015 it moved to the iconic surroundings of London and it was to be the last time I raced at a BWC. At all of these and a few events outside of the BWC I used my Superlight.

A year after owning it,  I converted it to an S-type and by then for me this particular bike had lost its sparkle. This was nothing to do with the lovely titanium bits or how it rode. It was as if the bike was a little bit  of a Jonah - bringing bad luck to me. The bike just seem to fail when I needed it most in a way no other Brompton I have ever owned had. This is of course a perception and all in my mind I am sure however the thought lingered.

In an attempt to make it different and change my view I used lots of black Brompton parts I had acquired and been gifted to turn it into my own Black Special Edition. The results...I hated it even more! Should have left it as it was.

I ended up selling it and relying upon one Brompton, which like every other Brompton I have owned, was a friend that could be replied upon for literally anything!

A steel Brompton is the luxury end of the folding bike market. Let's not mince words here...it is the best there is. It is as simple as that. The titanium Superlight version goes beyond that as it is more expensive and a less common sight on the road. Is it terrible to say that I liked that fact it was a somewhat exclusive club owning one? Probably!

Is it worth the additonal money? Only you can answer that if you are thinking of buying one. I did like mine but all my other Brompton bicycles have been steel versions.

Would I buy a Superlight again? Never say never, however I do own two Brompton bikes already and a third might not work for me. If I did I would buy an M6L and do very little to it other than stick a titanium railed Brooks B17 on it. Naturally, it would of course be in orange! 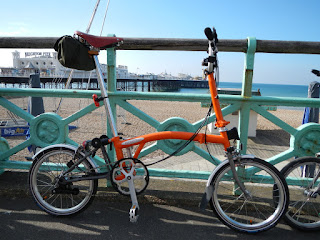