When I go for a longer ride (which before the 'C' was quite often) in my water bottle I always use a hydration tablet. There are lots of different types but I go for electrolyte tablets and I will explain why.

I am convinced that they actually help one suffering cramp after a long ride. I recall coming home from an overnight London to Brighton (where I had just water and no tablets), getting home and sitting down with a nice cup of tea. I got up far too quickly and vigorously and my left hamstring instantly went into spasm. This was so bad that I didn't know what do other than hobble to a nearby wall and just stand there holding on.  I started to sweat and feel clammy. The colour drained from my face. Mrs Orange and the Orangettes found this all so funny, one  by one they had to leave the room laughing. Memories of when football players with cramp stretched out their legs when they got a dose of it during extra time of a World Cup final flooded back. My attempts to copy them didn't last long as the air was filled with language the like of which the world has never seen the like of which! At this moment if someone had a cure, I would have gladly given them the pin to my cash card and the last three numbers on the security strip on the back!!

It has only been the rides where no tablets were placed inside said water bottle that the above happened. So, you can probably see why I have faith in them.

Until last week I had been using hydration tablets that cost upwards of £8 - £9 a pop. Having a look on the 'Wiggle' website for something totally different I saw that they had their own brand for £3.99. Having used them a few times on some of my more recent adventures, I think they are pretty good. For the price you cannot really go wrong. With some longer rides in the pipeline I will let you know how I get on. if they do not work...you'll probably hear me!! 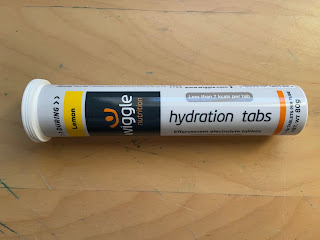