A few weeks ago Mark (King of the hill) suggested a long overdue early evening ride - Kew Gardens - Box Hill - Kew Gardens. With the date in the diary pencilled in for yesterday evening, we were all set  to cycle a route that never fails to provide lots of memories!

I have cycled this route - or versions of it - more than eight or nine times and always enjoyed it greatly. Yesterday our route was just over 48 miles and would see us clock upon an elevation gain of 2,133 ft.

Along with Mark, the participants were Matt and Dr John. My partner in crime BumbleBee was due to come as well but a family commitment prevented him from attending sadly. Still it was a little like a reunion of the old band in many ways and was the first time we had ridden together (socially distanced of course) for ages and ages!

As I got closer to Kew Gardens the heavens opened and the rain was heavy and constant for a good 25 minutes. I had my fingers crossed that it would stop and thankfully it did. For the rest of the ride the rain stayed away.

Setting off we cycled at conversational pace and it was lovely to catch up on what everyone had been doing and getting up to since we last saw each other.

We reached Bushy Park in what seemed like next to no time, cycling through with the sun in the west casting orange hues across the sky. The pedestrian gate would be closed by the time we returned this way so it would mean us cycling around the outside and adding a few miles to proceedings. 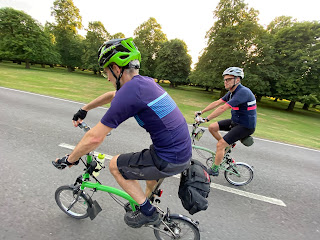 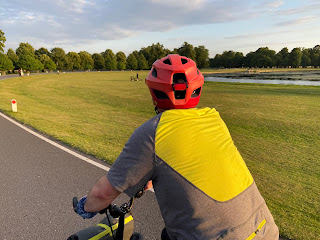 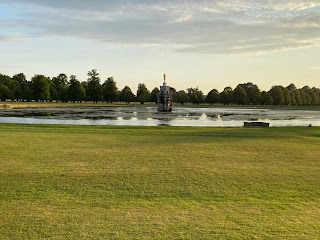 Thankfully there were few cars on the road which made things more pleasurable and it was turning out to be a great ride. Of course in the back of my mind was the dreaded Claygate Badlands - that we would be cycling through - and as I turned the pedals it dominated my thoughts.

The entrance to the Claygate Badlands is quite unassuming in many ways. It is approached by cycling along a quiet residential street and it sort of just appears. Tarmac is replaced instantly and dramatically by mud bridal path. 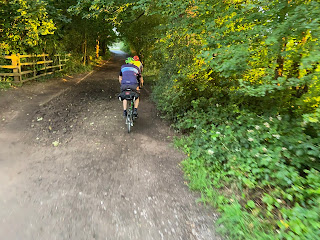 With the sun setting, every Hammer Film Producttion I had ever seen played in my mind. Thankfully the recent hot weather had at least made the surface quite hard and compacted and there were only a few patches of mud and water that could be negotiated with ease.

Taking a photo of Mark gazing wistfully at the setting sun, spreading its last rays of light through the trees was a lovely scene but remember the Hamer Film Production memory I mentioned. To me it made think that we had little time to get out of the Claygate Badlands before something flying through the trees, transformed and drained us of our blood! I pedalled faster believe me! 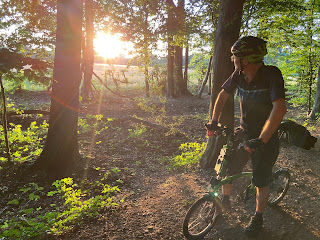 With our throats intact, we pressed on to the big draw of this ride, Box Hill. This involved lots of ups and a few wonderful downs that seemed to go on for miles. In the past it was on one of these downs - not far from the start of Box Hill - that my chain snapped and fell off. I passed the spot were this happened and where David valiantly tried to push me along as he cycled!

Reaching the base of Box Hill we readied ourselves for the big push. Dr John set a wonderful pace and Mark and I followed, along with Matt. I think it might have been one of my quicker ascents. Every now and then you could get glimpses of the views through the trees and the lights of buildings shining in the distance. 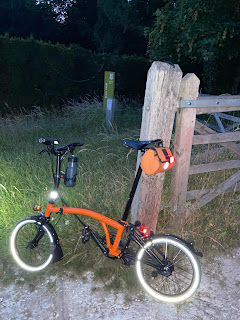 At the top we stopped at the view. There were a few other people enjoying it as well while we ate the tuck we had brought with us. After a few photos we decided to layer up a little as we all felt the chill of the night and needed more than just short sleeves. 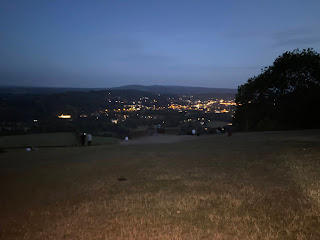 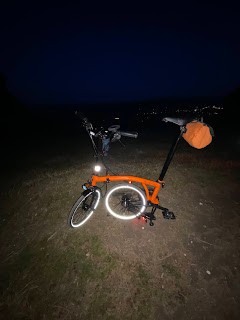 We passed what wood normally our halfway stop the 'Smith and Western' pub. Sadly is was of course closed and at some point in the future I would love to do this ride all over again but of course pay it a visit!

The route back was glorious. I would like to imagine that it was downhill all the way but of course it had its ups and downs as well. Still, it was mainly downhill and we covered the ground quickly. The roads were still more or less empty and with pubs etc.., closed it was a very quiet Friday night. There were times when the ride felt a little like a night ride to the coast, in that it was eerily quiet with only the sound of our bicycles stealing through the night.

Reaching Claygate Badlands - this time in complete darkness, we stopped halfway through, before carrying on. I was glad to get going through it, just in case!! We arrived back at Kew not too long after midnight and all thoroughly enjoyed another nocturnal adventure. After saying our goodbyes and having made provisional plans for future rides when the 'C' word subsides a little more, we made our respective ways home.

This was a wonderful ride! The route is of course very enjoyable but it was perhaps catching up with the old guard that made things even more special. Many thanks to Mark for navigating and for the company of Matt and as always Dr John. 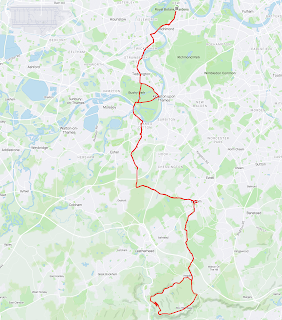 One footnote to the ride. When I returned home I tried to be as quiet as a mouse. Apparently I wasn't. My Brompton put on the a wooden floor as I closed the door and my SPD shoes on said wooden floor made such a racket, Mrs Orange tiptoed halfway down the upstairs landing armed with her right winter boot, thinking I was a burglar! Needless to say I a very dutiful husband for all of today!!
at June 27, 2020