I had intended to go to Alexandra Palace this morning but as the sun was shining, I was up early and I fancied something different I decided to head towards the Wimbledon and its Windmill. The last time I paid it a visit was getting on for six years ago on a Brompton group ride with some of the old crowd.

My total milage was bang on 32 miles and my route was somewhat erratic at times - at least it seemed that way. I had to restrict myself to not taking too many photographs however as I had forgotten to take my larger water bottle this was not such as bad thing. Luckily I had a smaller 500 ml one in my saddlebag. 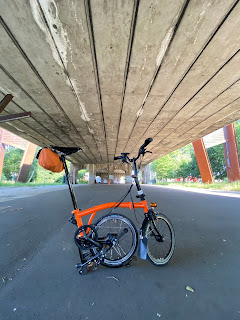 Over a small footbridge adjacent to a railway line running across the Thames, a little dog - one of those little brutes that resembles a fox but is just very small - launched itself at me in a full-bloodied assault! Its owner was more concerned with her phone call than my leg being punctured by several of its horrid little needle-like teeth!! Luckily I survived and 'Charlie' was called off. 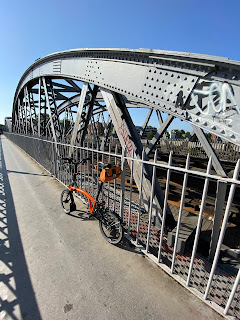 The Thames looked lovely and as blue as the skies above it. I had no clue where I was other than I think it might have been Barnes? I have been there many times before, so I should know it I suppose. The little rows of houses and shops on a sunny day like today have always reminded me of the seaside for some reason?? 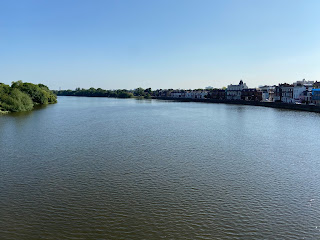 There was a large section of gravel path that made its way to the windmill, requiring careful negotiation I can tell you. A few times I was was wheel spinning but I got there in the end.

The windmill came into view and as soon as I saw it, memories of that winter ride back in 2014 (can it really be that long) came folding back (did you see what I did there). 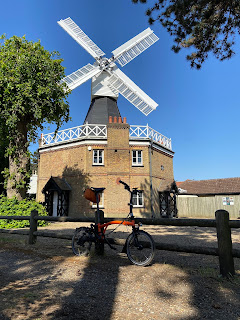 The windmill dates back to 1817 and is a Grade II listed building. It was a fully working windmill only up until 1864 after which its mechanics were removed to make way for people to live there. It really would be wonderful to see it working. Are there any working windmills in the UK? 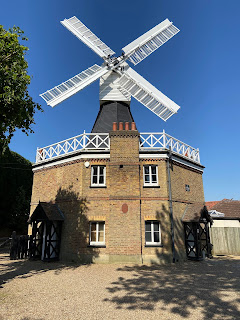 After a few photos of my Brompton (and the windmill) I headed back. The former group rides with David at the helm really were the stuff of legend in many ways. You knew what the destination was going to be, but the getting there and back was always an adventure!

The Brompton groups rides still exist but the old crowd only occasionally attend - myself included. What is great is that I am happy to navigate myself - and usually Dr John and occasionally my partner in crime, Bumble B) on my own adventures. 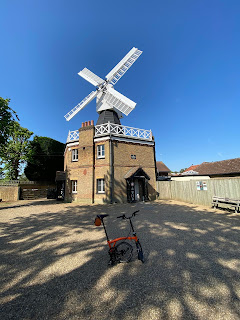 One thing I noticed is that apart from people still queueing outside shops, the roads seems as busy as I remember them from before lockdown. 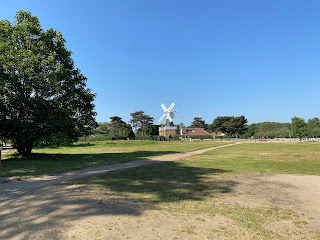 When I got to 'Charlie's' bridge I stopped to take a photo and saw in the distance Trellick Tower. I made a mental note to one day pay a visit to its counterpart in East London, Balfron Tower where its architect Erno Goldfinger (what a name) moved in to flat 130 on the 25th floor for two months! 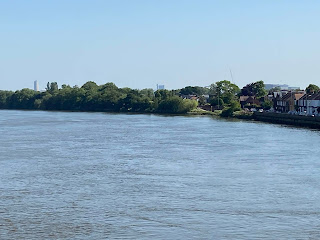 Below I have posted a link to the ride I referred to where we visited the windmill back in 2014. Of all the videos I have made it remains one of the most popular.