Today it was the second part of my Howard Carter themed ride and a glorious day it was too. With the sun shining down I decided to take my Orange Flame Lacquer as it always seems to catch the sun with its lovely orange-copper lacquer almost changing its intensity depending on the angle you look at it.

The first port of call was to pass another special place to me, the Royal Geographical Society. I cannot think how many times I have stopped for a few moments and looked at the face of the statue of Shackleton over the years. Today was no exception. I wonder what he would make of me starring up at him? He would probably recognise me and say, 'not you again!' 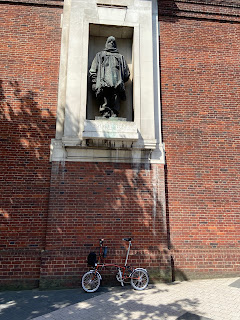 Of course it was all about Howard Carter and just up the road, overlooking the Royal Albert Hall and the Royal College of Music, stands Albert Court. This was where Carter lived for many years right up to his death in 1939.

He lived at number 49 and his apartment was over two floors with the usual five bedrooms, three reception rooms, three bathrooms and a balcony that the good ones had.  The lady I referred to in my previous blog lived on the floors below and from what she said, her one was better.

A friend told me a few years ago that it was actually up for sale for about £10 million so you'd need deep pockets to afford it and the £40,000 a year service charge. 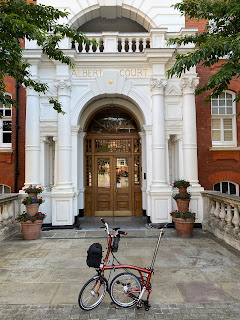 Even back in the 1920's an apartment at Albert Court would have cost a fortune and it does make one wonder how Carter was able to afford it - whether that be renting or owning? I know someone who as a small boy when visiting famous historical sites often sought out a souvenir to take home with him - and I do not mean something from the gift shop. Quite shocking historical vandalism! Some say that Carter might have acquired a few souvenirs of his own from his Egypt days, that found their way on to the open market! Maybe this provides a possible answer? 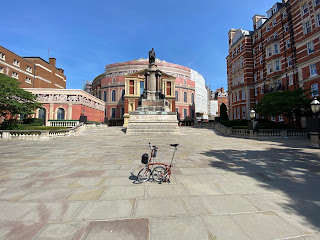 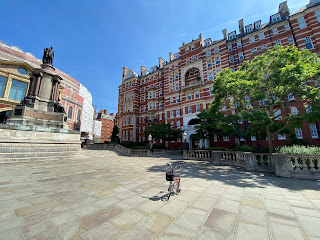 This is an area of London I know extremely well and normally is would be teaming with tourists being of offloaded from tour buses, taking photos and generally getting in the way of the Brompton user simply trying to get from A to B! When it gets near to the Proms (which like everything else won't be happening this this) it is even worse! Today it was empty and I had the entire place to myself. 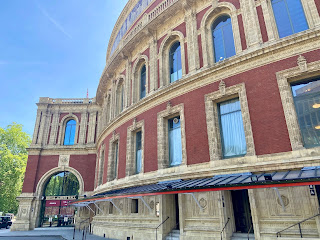 Back in Hyde Park, people walked dogs, jogged, cycled, tried to not fall off their electric scooters, pushed prams, spread out on the grass as if they were recently departed and had a stroll. I took photos of my Brompton, while trying to eat a chicken salad baguette I had brought with me. 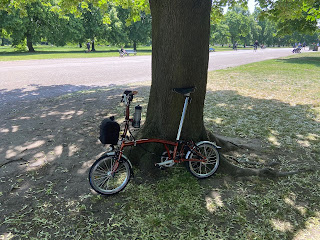