Halloween on a Brompton

Beware blog reader for the tales I will retell below are not for the faint of heart! You will hear of the sinister, the evil and the terrors that can be found in London!

Essentially what this means is that yesterday on Halloween I went on a 'Halloween' ghost walk with iCrazyBee and another brave member of the Brompton clan.


We met at 19:00 outside exit 2 of St Paul's tube station. My journey from St John's Wood to St Paul's took just over an hour! Yes you read right. Believe me trying to negotiate the streets of London in the height of rush hour on Halloween was in itself a nightmare!

Luckily the group didn't set off straight away and I saw the familiar and welcome sight of my partner in crime iCrazyBee and the other brave Bromptonian. I paid the guide the sum of £9 and not long after we set off.

Our guide was a very skilled story teller and mixed fact and humour extremely well. Walks like this happen every day in all weathers and there are different themes to suite different tastes. I had been on a walk like this in the past but not with a Brompton in tow. 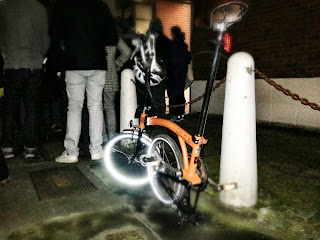 One of the tales our guide told us about was that of a monk my the name of Gervais. He was a very godly man but not liked by his fellow monks. In a fit of pure calculated violence they waited for prayers to finish and several set upon him with clubs. His head was also cut off.


It is said that the ghostly figure of the monk can be sometimes seen...searching for his head. The picture below was taken of another dark passageway and perhaps you can make out something rather sinister? 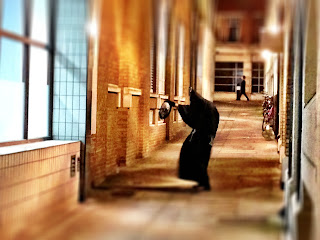 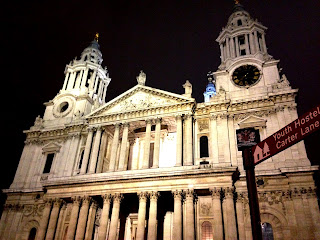 London really does take on a different guise after dark. Buildings look totally different and with such an atmosphere created, it is not difficult to suspend belief and wonder what could lurk in the shadows around the next corner. 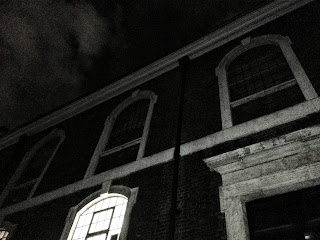 The site of the Old Bailey which was in turn the site of the infamous Newgate Gaol provided a particularly gruesome episode for our guide to tell us about.

An Italian gentleman was tried for witchcraft and sent to Newgate Gaol. He was, let us say well built. At the time many of the inmates were starving to death and upon entering the gaol the Italian was seized upon by a starving mob, who proceeded to kill him with their bare hands and...eat his flesh!

Not long after a huge black dog was seen in the grounds of the gaol and it sought a terrible revenge as all those involved in this terrible of events had their throats ripped out by this beast that was said to be larger than a wolf. It is said that its howls can be heard and occasionally a large black dog can be seen, still salivating, roaming the area! 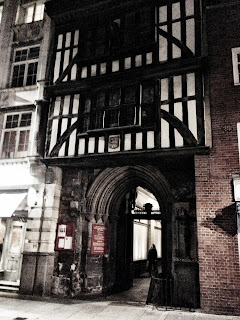 The walk finished at about 21:20 and it was really good. It made me ponder the idea of returning to some of the locations in the early hours of the morning to photograph empty streets of London, with no one or at least very few people about. I will give this some serious thought.

The guide was from 'London Walks' and their website can be found by typing that into a search engine. I thought I knew London and its history pretty well (history degree) but going on a walk like this provided a new insight into a great City and its associated history.