The last time I had a puncture was on the London to Cambridge trip. Luckily I had a Cambridge educated engineer riding with me in the form of Harry from, Small Wheels Big Difference.  He had the wheel on and off in record time but the biggest and hardest job was pumping up the new inner tube.

On a recent London Brompton trip another rider had the misfortune to suffer punctured front wheel. Instead of using a pump, one of other members used a little device called a Genuine Innovations Air Chuck. With this he pumped the tyre up in seconds and I do mean seconds. Having not seen one before it was bordering on witchcraft an I knew that it would be a great little thing to have in the bag on trips, just in case.

I managed to use my London Cycling Campaign membership to get a couple of pounds off and I bought one yesterday. I was surprised at how small and lightweight it was. Perfect for putting in your saddlebag. 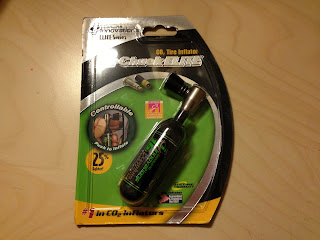 It came with the little pump part that fits over the valve and a CO2 bottle. I hope to get some more of these soon.  The little bottles of CO2 are enough to pump a Brompton tyre up with ease and if you buy in bulk aren't too expensive. With this in mind a friend bought some in bulk and he will split them and the cost with three other friends. It's a very good way to do it.

Hopefully, I won't ever need to use it in anger but you just don't know? If a colleague had a puncture and didn't have on of these I would let them use it as it would get everyone up and rider a great deal quicker. I can see this going with me on most rides as it so small and compact you would hardly notice that you were carrying it.