What a a great day! Well, there you have it, no need to read the rest of this blog. I jest of course but today was a great ride.

The assembled Bromptonians arrived at Richmond Station outside Costa Coffee in good time and after a few photos we headed off towards out first stop. It was the Brompton factory no less for a photo opportunity. There were 15 of us which was a great turnout and we also had quite an international representation. Malaysia, USA, New Zealand, England and even South Wales. 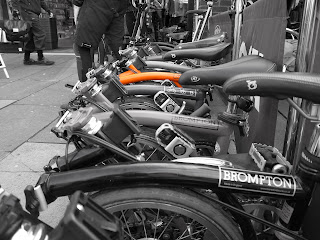 I was toying with the idea of taking my Raw Lacquer S2L but decided against it as some of the ride would be on canal footpaths and as regular readers will know, this particular Brompton does not do that sort of thing.

Before long we arrived at the Brompton factory. It was great being back there. The last time was the factory ride and we assembled our bikes for a a few photos. Mick and David, fellow administrators of the London Brompton Club popped into the factory to say hello and after some smooth talking we were  permitted to venture in to the hallowed turf. I say hallowed turf as the only thing I can liken to visiting the Brompton factory, is going to Lords Cricket Ground. I have been to Lords more times that I can ever remember, but seeing the wicket from the pavilion, always makes me pause for thought. 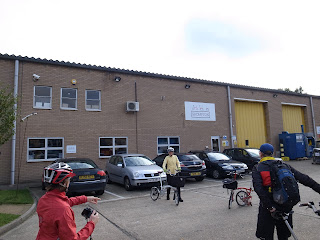 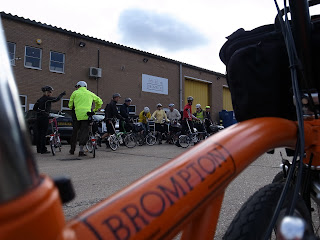 Outside the factory dozens of boxes containing Brompton bikes were awaiting collection for delivery to all corners of the earth. Brompton truly is a global brand! 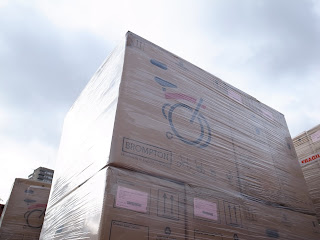 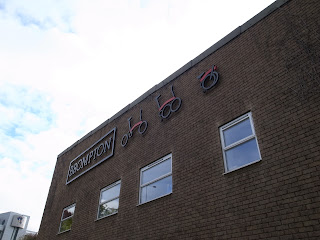 I must say something before I go on. Please do not expect to go to the Brompton factory and in any way expect them to invite you in. It is a working factory and like any successful business they are extremely busy. Our expectation was merely to have some photos of us and our bikes near the factory. What took place really can be viewed as a one off and although we were extremely grateful for the welcome we received, I wouldn't want to give the impression that you could or should go there to do the same.

Back to the blog. We were invited to go inside for an impromptu tour. Split into two groups our guide was Nigel who gave us a very interesting mini tour. (I think I saw Nigel when I was racing at the London Nocturne earlier this year but can't be sure).

We saw lots of interesting prototypes that may not make it to the end user. The orange seat took hold of my interest as you can imagine!!

A real bonus was seeing the boardroom. I can only imagine the meetings, decisions and discussions that are held there. Being a bit of a Bertie Wooster type, I suspect that if I worked there, if there was a lull in the brainstorming process it might degenerate into being used for some sort of spur of the moment sport, with that lovely table being in some way used.

The new brake levers were shown to use and seeing then in the flesh I can say that they look and feel excellent. My bikes are getting them fitting when available along with the new crank. The new, updated parts were proudly on display and the toolkit is surely a must have item if available for Christmas. I would go as far as saying that if they had of been selling them there and then, I would have bought two!

One of the highlights of this impromptu tour was seeing the journey Brompton has taken. Older models hung in the staircase leading to the boardroom as if to say, here is the progression, how far can you take
things?

The many awards given to Brompton and Andrew Richie proudly hang on display along with several rejection letters from other manufacturers and banks. Let's hope that in 2012 and beyond British engineering is believed in and invested in!

Our time had come to an end at the factory and we said our thanks and said goodbye. A very big thank you to Brompton and the staff who welcomed and allowed us inside. I am sure they were busy and to give up their time was much appreciated. The only downside was me leaving with the desire for Brompton number 3 in 2013!

We continued after this high along the Grand Union Canal. It was as the rain started to fall and the surface became increasingly muddy that I was thankful I did not bring my S2L. I suspect that it would have been at this point, had I brought it, with all the mud and rain I would have suffered a mild breakdown as my beloved Orange Brompton was fast becoming the dirtiest it has ever been!

Disaster struck for Mark as a front puncture meant we had to stop. Luckily it was under a railway bridge so we didn't get too wet. Mark and David worked at a furious pace and the wheel was ready for inflating. David had a compressed air canister that inflated the tyre in 3 seconds. (Mental note to get some of these). 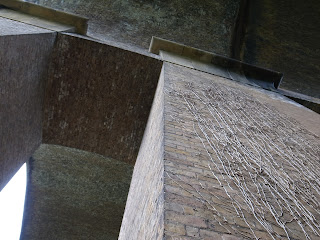 We stopped off at Sainsbury near Kensal Green for a sandwich and rest before heading off to Paddington. At Little Venice we stopped for another few photos before making the short distance towards Paddington. 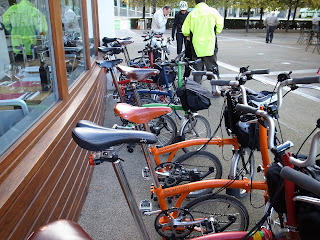 We said our goodbyes and headed our separate ways. Another great day had by all and thanks to David who organised this ride, Andy for getting us through a tricky patch, Mick who asked and was given and to everyone else who rode with us today.

So, what did you do at the weekend? If you like the sound of what I did you know what to do. Get a Brompton and it won't just be used for the daily commute!

Below please find the link to the ride data and route recorded by my Garmin Edge 200.