Wonderful overnighter to Whitstable on my Titanium Orange Brompton

Last Friday was a nocturnal ride to one of my favourite night ride to the coast locations, Whitstable. Many describe this as the Queen of rides and I would have to agree. It is one of my favourites and with only limited places available - due to the 'C' word - I was lucky to get a slot.

I decided to cycle in rather than take the tube and I am glad that I did. There still a breeze in the air - it had been very strong at times throughout the day - but it was much gentler.

Passing the Guards Memorial opposite Horse Guards Parade I stopped to take a photo and pause for thought. 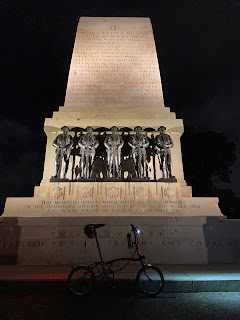 In my formative years I pretty much passed this every day. In fact I would say hello to each of the five soldiers.

The meet point was not too far from the London Eye and the first group of 6x riders were getting themselves read to leave. One of their number was Sam who I had not seen since the last time I did the 'Tweed Run.' She looked well and was like everyone looking forward to the night ahead.

Our group was to leave a short time after. Our leader for the ride was veteran and all round good egg Ross. After a brief safety chat we headed off into a warmish night. 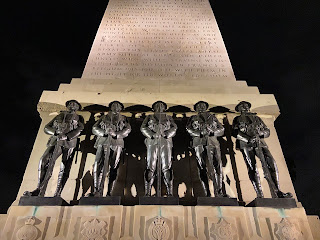 Our progress was swift - perhaps as there was only six of us - and we reached the familiar sight of the Old Vic theatre. On our Brighton rides, Dr John and I normally turn right at this point but se would go straight over. 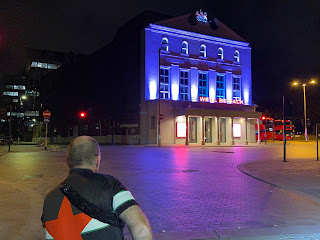 Ross does lots of London themed rides in addition to leading the odd night ride to the coast and this was evident when we made a quick detour to Mandela Way to see the Russian T-34 tank that resides on the corner of Mandela Way and Page's Walk in Bermondsey. It seems that many years ago a gentleman was unable to gain the necessary planning permission to redevelop the site and decided to put a tank there with the gun turret pointing in the direction of the council buildings. Only in London! It has been a while since I have been there but the tank - which frequently gets repainted - was a totally different colour when I did. 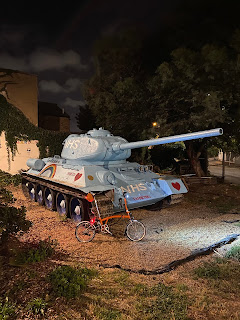 We passed Greenwich and the Cutty Sark in what seemed like next to no time and soon arrived at Woolwich. On the distance the passenger ferry that takes passengers across the river Thames free of charge was illuminated. These are new and I have yet to travel on them. Every time I see them I say that this is something I must do! 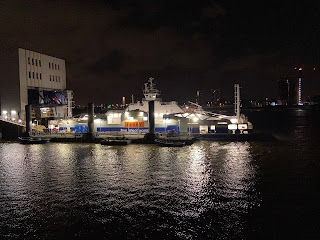 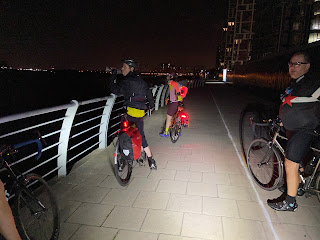 The weather was very kind to us and it made for lovely cycling conditions. There was only the faintest of breezes throughout and made the entire experience that more enjoyable. 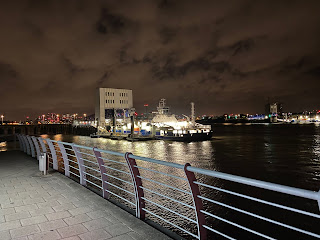 We stopped briefly the the bus stop on the Kent Fastrack and I could not resist the temptation of propping my bike up against the wire statue and taking a photo! 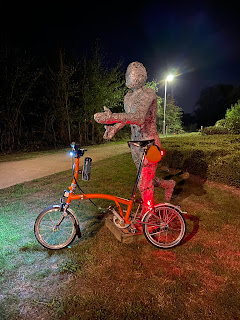 Not long after this, in fact on the stroke of 03:00 in the a.m. we arrived at Harmer Street with its clock tower striking the hour quite loudly. Sadly the pub called 'The Call Boy' had large wood coverings put up. I would imagine that it is in the process of being redeveloped. It will be interesting to see what it becomes the next time I cycle to Whitstable. 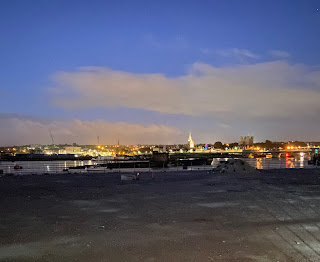 The photos here - if you look very carefully as they were taken in darkness - is of a Russian submarine...yes a submarine. This found its way into private hands and after being moored near the Thames Barrier and later Folkestone, it is now sitting on the River Medway in Rochester. It was formally a museum open to the public but is now in need of some TLC. 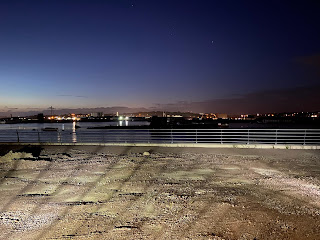 Our halfway stop was in Strood in the familiar and very welcome surroundings of the Church of the English Martyrs. Ride to the coast veteran and facilitator of the best halfway stop bar non, Tim, had got up at stupid o'clock to provide us with some lovely refreshments.

Strangely we had somehow beaten the first group to it and they arrived about 15 minutes after we had. Socially distanced on separated seating areas we consumed cheese rolls, tea, flapjacks and quite possibly the best slice of Victoria cake, south of the River Thames!

The first group left before we did and not too long after that so did we. Normally I feel the cold after resuming the cycling after the halfway stop but on this occasion I was perfectly fine, requiring no additional layers. 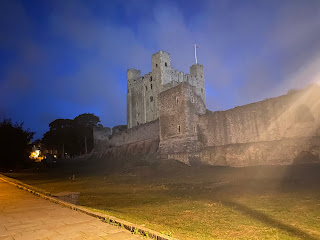 With dawn on its way the countryside was illuminated in all its glory and things got very picturesque to say the least. 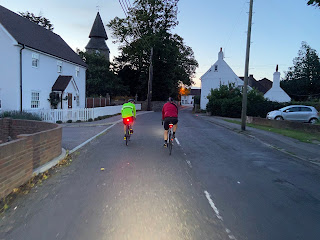 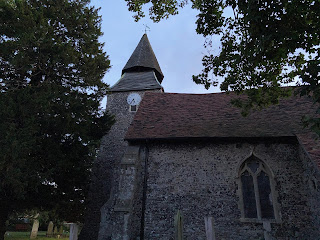 With the sun rising, it was very obligingly casting an orange glow in the distance making just about everyone get out their phones to snap a few photos. 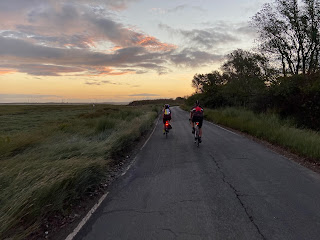 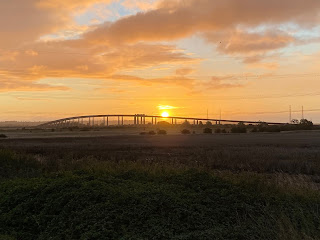 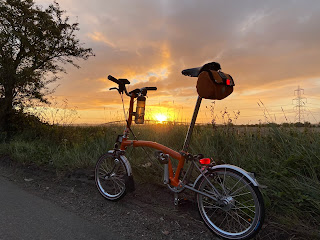 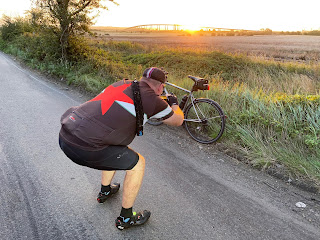 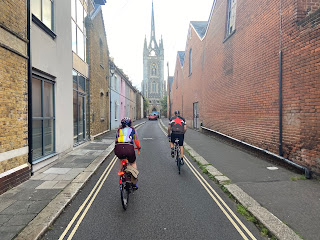 The last left turn towards Gravney Marshes normally means a sprint to the finish for anyone who wants to do this. This time we kept together but upped the pace slightly. The air was fairly still and if anything it was behind us, ever so slightly pushing us along.

We made very good progress and when reaching the last stretch towards the end and breakfast stop, I waved my goodbyes and headed off straight for the station. 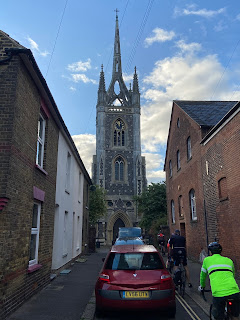 I got the first available train and with the carriage more or less to myself settled back until the train rolled in to Victoria. From there I had a few miles more to cycle - as I had vowed not to use the tube to get home.

London to Whitstable was 67.5 miles but with the extra milage I totalled up 104.5 miles, so pretty good.

Another great ride and many thanks to Ross for leading, my fellow participants and Tim for the lovely food stop/refreshments.

There really is something quite addictive about night rides to the coast. In paper many people stare in disbelief at the prospect of me doing these and there is little I can do to convey just how enjoyable they are. Perhaps it is something you have to experience for yourself?

Stay safe our there people!! 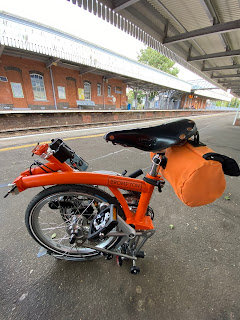