Dr. John and I had arranged to do a night ride to the coast for a few weeks and Friday 31st July coincided with the arrival of my new Orange Titanium Brompton. I pondered long and hard about whether I should take a new bike out on what could potentially be a risky 59 miles.

For several reasons we ended up cycling to Brighton rather than our intended destination of Burnham on Crouch (we'll do this another time). I checked my new Brompton over and everything looked really good. Nothing was loose, nothing out of place. It was perfect. I therefore felt confident - as much as you can be - that it would be okay to take it out. The overnight London to Brighton was a ride I was looking forward to competing on this bike, albeit not as soon!

We met at Hyde Park Corner and the night was warm. It had been a very warm day and temperatures were not predicted to go lower than 17 - 18 degrees. The roads around Hyde Park were crazy busy and cars and motorbikes could bee seen and heard racing around at stupid speeds. It wasn't overly pleasant and the police - who were nearby - just seemed to let this all happen without acting. 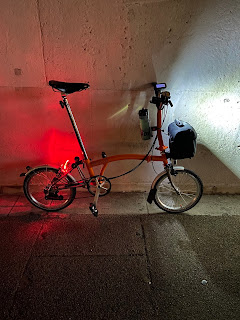 Dr. John arrived more or less at midnight and we cycled the short distance to the London Eye where we picked up the route to Brighton.

Our progress was good and I think we were both glad of the short sleeved tops we were both wearing. It was going to be a hot night / early morning.

The first part of the ride is us trying to get out of the urban sprawl. As soon as we passed Clapham Common things started to ease a little. We welcomed the left turn off the busy main road as it marked the point where the roads would become much quieter. At this turn we always see a fox or two and as if on cue, there it was closely followed by a couple more.

Reaching the cattle grid at Farthing Down really does mark the point where the ride takes on a more rural feel. The roads are more country lanes and the only illumination part from the lumens our lights were emitting was the moon.

For reasons unknown I found the ride harder than usual. I really don't know why? We weren't going any slower - in fact in some part we were possibly cycling faster - but Dr. John felt the same. I suspect that the warmer than normal temperatures may have played a part.

Our half way stop was a service station that Dr. John had cleverly found the last time we did this ride. There we were able to get a cup off tea, stock up on water and also treat ourselves to a Magnum lolly - which believe me never tasted so good!! 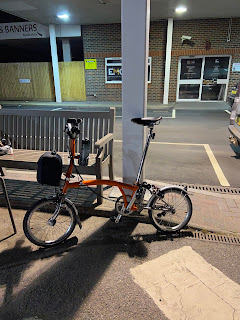 When we set off, despite the warmth of the night, I felt cold and was compelled to put on a lightweight bolt in the bag jacket. As always it wasn't too long before this was put away again.

Turners Hill - a location that first time round was something I found demanding - came and went with ease. Dr. John and I chat away while making our accent and I am certain that he could easily cycling into the distance if he wanted to.

Dawn in all its glory arrived and quite suddenly the countryside around us was basked in its glory. I have cycled this route many times but this morning seemed to be prettier than I have ever remembered it before. 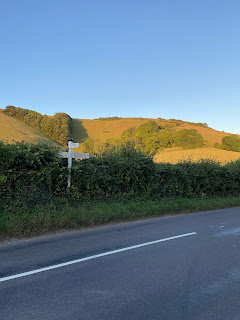 My new Brompton was performing really well and from very early in, I already knew that we had become close friends. I was really glad that I hadn't chickened out and taken my Orange Black Special Edition.

The dreaded Ditchling Beacon loomed. I say dreaded but in reality I don't dread ascending it at all. After some brief preparation in the car park at the base, we made our way up. The views through the trees were truly stunning. It was very difficult to resist the temptation of stopping to take photo or two. Eventually we made it to the top with the sun shining and the entire area made resplendent as a result. 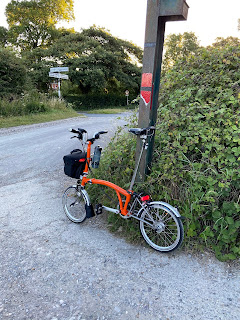 Making our way from the top of the Beacon is very enjoyable as almost all of it is downhill all the way to Brighton central. We headed straight for the station and I made a metal note that the next time we come this way, we will not do this. We will go and enjoy the views, take some more photos and go and have a breakfast somewhere before heading back. 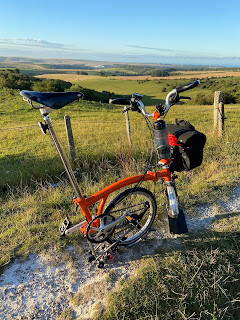 Our train was the 07:25 and armed with a cup of coffee and probably the best almond croissant ever we sat back on an empty train. I got off at Farringdon while Dr. John continued a little further. It was another lovely adventure. 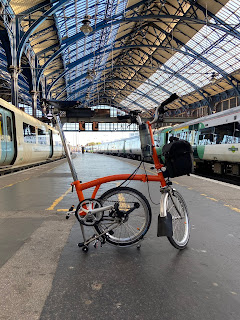 When I got home I felt fine. I had a few hours sleep before having to go out for a short trip but as the evening wore on I felt tired. I don't thing that anything could have woken me from my slumber that night and the next day I felt okay but knew I had just cycled 60+ miles!

Many thanks again to my ride partner Dr. John. It is great that we can do these rides together and I always enjoy them, his great company and friendship.