I wonder if this surprised a few of you? In many ways it surprised me too but yes I am now the owner of a rather lovely Orange M6L Superlight. (In fact a few weeks ago Dr John sent me a text message asking whether I had bought another Brompton. At the time and until quite recently, the answer was no and I wasn't really thinking of getting one.

I have owned an older incarnation of this bicycle and bought one in 2013.  (Can it really be that long ago)?! In a recent blog post I explained why I was eventually to get rid of it. Strangely enough I cannot put a firm date on when I sold it. I think it was late 2016 or mid 2017? I certainly didn't blog about it.

Okay so what did I get?  Below are the specifications of what I went for:

Almost immediately upon taking it out of the box, the B17 titanium Special Edition that had been on my Flame Lacquer was removed and placed on to my new bike. 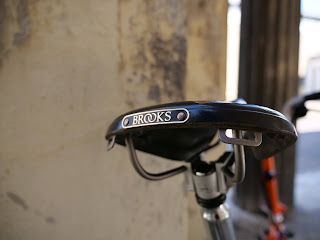 The stock handlebar grips - which I think are rather good by the way - were swapped out for some Brooks, Ergon leather 130mm grips I had actually bought for one of my other Brompton bikes. 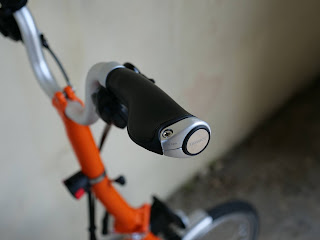 The standard rear reflector I swapped out for A Busch & Muller 2C rear battery light, that I prefer to the version you can get from Brompton. 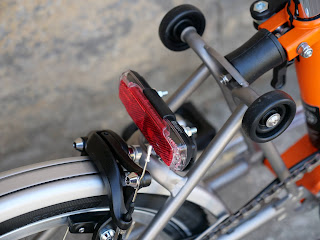 A Rixen & Kaul bottle cage holder was fitted.  (Of all the various types I have tried over the years, this is the one that has been the best for me). 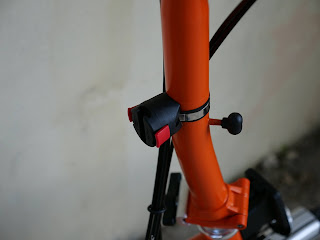 The stock Brompton inner tubes will be replaced at some point with a pair of Schwalbe AV4s - not that there is anything wrong with the ones the bike came with. I have always done this and used the standard Brompton tubes as spares that I carry with me in case of a puncture.

I replaced the stock Brompton pedals with a new set of the Shimano Click'R SPD pedals with build in reflectors that I have on my other Brompton bikes. I get on with them well and just like them a great deal. (These were meant to be stored away in readiness for my Flame Lacquer). 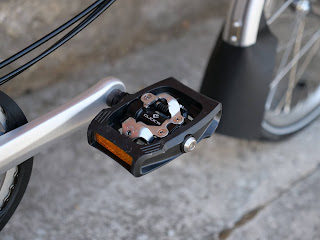 The only other thing I have done is to put some helicopter tape on the various parts of the bike where cable rub might be an issue. Apart from the above the bike is as I got it from the factory.

One thing I had no interest in too this Brompton was any form of dynamo lighting. It is a Superlight after all and I didn't want the weight of the dynamo hub and associated lights. I suppose some may think it realer foolish to put a Brooks B17 on this bike but I love that saddle and I can sort of justify it as it is the lighter version of it. 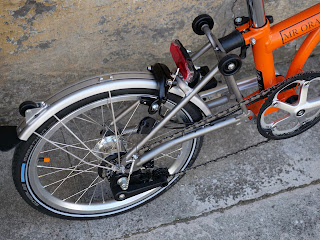 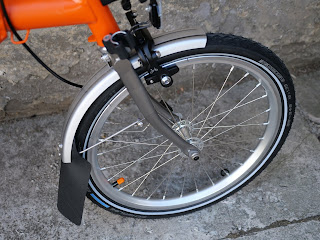 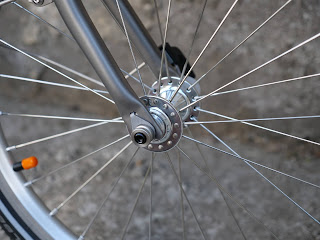 My new Superlight seems to ride a great deal better than I remember old one did. This might be down  to the longer stem and new M-type handlebar and the updated suspension block. (I also thought the same of my Flame Lacquer when compared to my original Orange M6L). This one does seem to absorb the vibration (something people tell you titanium does that I didn't really feel on my old Superlight) more than I remember my old one did. It just seems a slicker set up generally.

The weight saving - yes I know it isn't a huge amount in the big scheme of things - is noticeable. I imagine that it is not too far off 1kg lighter than my standard all steel Brompton. This is of course obvious when carting it around. I am sure that when I eventually have to cart it up and down the stairs of a railway station / tube station I will notice. It also feels a little different when riding. Naturally I wouldn't say it has or will make me faster but there are gains to be had when ascending hills for example.

Okay, why did I buy a Superlight version when I sold the one that was more or less the same? That one is rather hard to answer. I have no regrets about selling the one I owned previously.  Me playing about and converting all the silver bits to black coated just didn't work for me. I ended up hating it. The moon and stars aligned somehow with this one, and circumstances allowed me to buy one and I suppose I went with the flow. It would be foolish to say it sort of happened...but that is more or less how it went and the best way I can describe things. 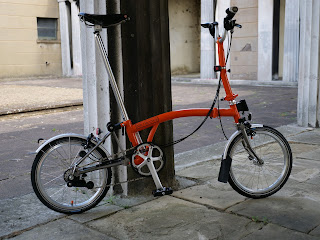 The fact that the Superlight is the top of the Brompton Bicycle food chain does appeal to me. I don't know the ratio of steel to titanium bicycles are sold each year but the titanium version is the one you don't see a huge amount - probably as there is a hefty premium to join the club. Added to this, in the past the supply of Superlights has been restricted somewhat due to the availability of the titanium parts.  Of course this particular Brompton is rather unique and rather special. 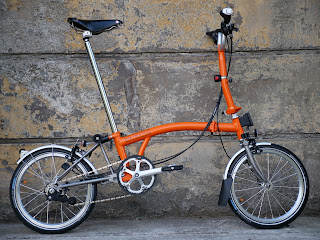 I can see me getting on very well with this bike. This one is definitely there for the long haul. I can now start to take it with me on lots of adventures. I can see me taking on rides that I have not used it on just to see how it performs and metaphorically tick off the list of locations, rides and events. I cannot for example wait to complete my first night ride to the coast or my first 100 miler on it.

So, I now have another Brompton bicycle and I suspect you'll be seeing a great deal more of it in the not too distant. 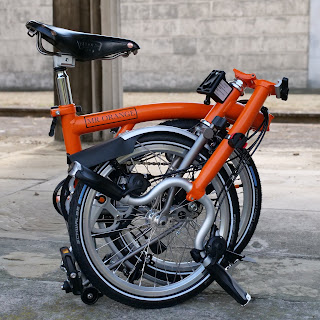