Today was a very different sort of ride and one with a theme - songs associated with London street names. Setting off I was wondering if the predicted rain would stay away for the majority of the ride...

There were two separate groups doing the ride. Big wheels staring at Hyde Park Corner, which I passed when travelling to the small wheels contingent at Russell Square. When I arrived everyone was there and after a quick coffee and almond croissant, it was decided that both groups would meet up but ride as two totally separate groups where social distancing prevailed!!

As we set off the sound of the first song was played through a bluetooth speaker. 'Streets of London' by Ralph McTell. This wasn't assigned to a specific street and served more as an introduction to what was to come.

'Baker Street' by Gerry Rafferty has a rather famous saxophone part that urban legend asserts was played by the late Bob Holness - who was a host of a popular quiz show with a bit of a cult following called 'Blockbuster.' (I wish it were true)! 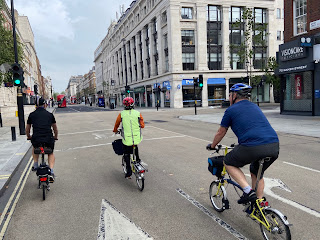 'Warrick Avenue' by Duffy is an area of London I know rather well having lived not a million miles away when I was growing up. 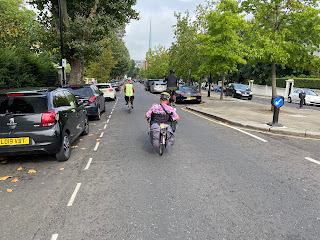 The song title refers to the tube station of the same name. 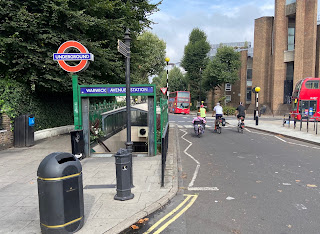 Not far from the picture below is 'Portabello Road' by Yusuf/Cat Stevens. This famous market was a location I used to visit early every Saturday morning with my dad. He loved it there and bought almost all of the fruit and vegetables we needed. 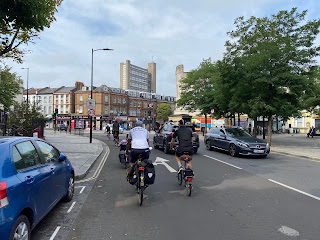 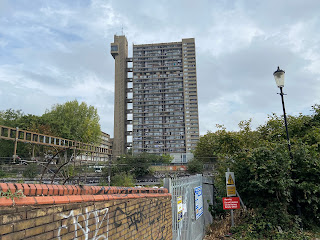 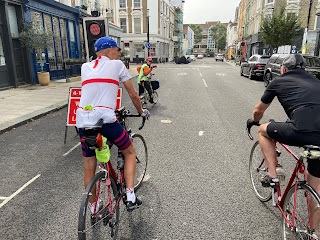 '(Sunny) South Kensington' by Donovan. This was home turf for me for several years and although it has changed quite considerably over the years, I am still rather fond of it. 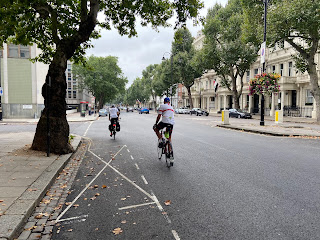 A bonus for me before heading across Albert Bridge was seeing the house where Bob Marley used to live. I think I have written elsewhere on this blog that when I was a great deal younger, I attended a Sunday school / Church that was almost exclusively made up of members of the Afro-Caribbean community. I have very fond memories of listening to all sorts of music but can still remember hearing Bob Marley being played through a large  sound system for the first time! 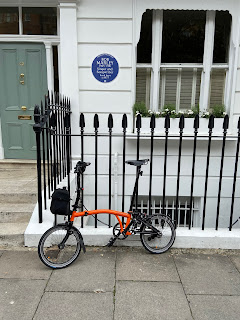 '(Misty morning) Albert Bridge' by the Pogues is a rather good song and I hummed it as I crossed the bridge. 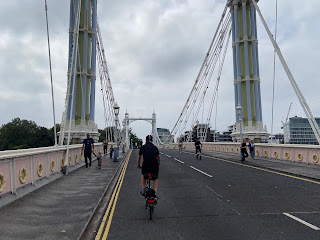 Again going off the list of songs I spotted a cafe named 'Shalamar' and this made me think about the group 'Shalamar.' I remember seeing Jeffrey Daniel doing what was to become the moonwalk for the first time with me memorised and moments later trying to do it myself!  I asked Chris whether Michael Jackson got it from him and it seems he did. 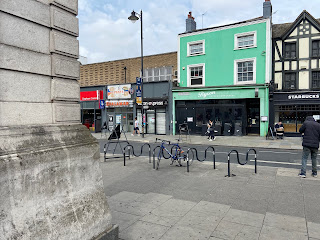 'Electric Avenue' by Eddie Grant is a song with a very important message but back in 1982 I merely sang along to it as it is a wonderful song. As I type this I know that this song is going to stay in my head for about another two weeks!! 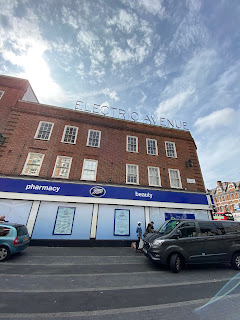 '59 Lyndhurst Grove' by Pulp proved to be illusive. At first, it was suspected that 59 was the pink house below. 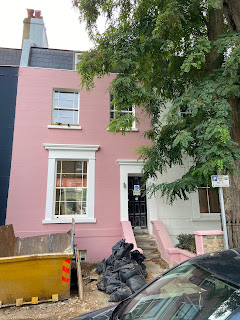 This was disputed and conversations were had. 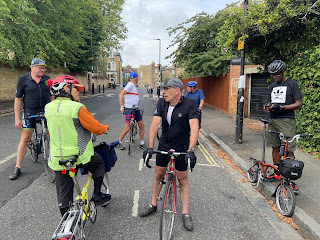 Eventually, the real location of 59 was located. I have to confess to not never being a fan of Pulp or Jarvis Cocker though. 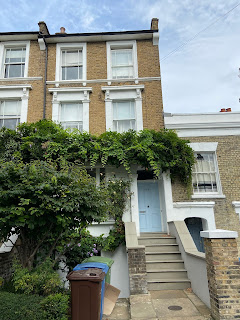 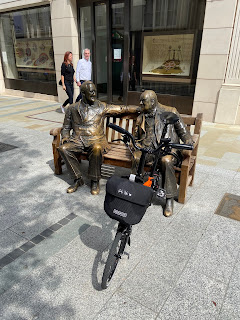 'Soho Square' by Kirsty MacColl refers to waiting for a lover on a bench. Fans gather there every year on what would have been her birthday. 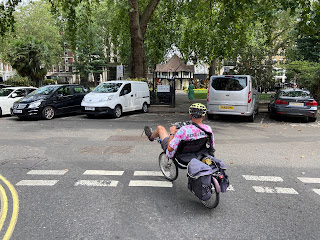 This was a great 22ish miles and the theme part of the ride was such a great idea. The rain did hold off and by the time I got back to the car I had cycled close on 30 miles. Many thanks to Nick for organising and to my fellow riders.

All the way home I was singing 'Electric Avenue' and Mrs Orange wondered why later on she was humming it too!