I was up quite early this morning - the benefit of having two daughters who helpfully reminded me at 06:00 in the a.m. that I had a ride today!

In fact getting up a little earlier was not such a bad thing as I wanted to change the tool I was told was the one for removing the bottom bracket on a Brompton - which believe me was not! On route I saw a lovely looking church that I am sure was used in a television programme a few year ago called 'Ultraviolet' which was all about vampires in London. 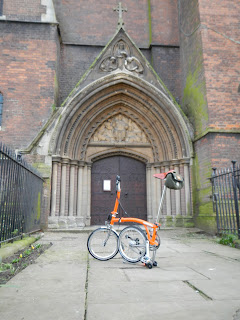 At the cycle shop I got a refund but was told that it was the correct tool. I think they were tools! Soon I arrived at St Paul's Cathedral and saw my partner in crime iCrazyBee already there.

After a few minutes other Bromptonians surfaced and after chewing the fat for a while it was time to take some photos. For me the only thing worth looking at was of course my Titanium Orange Brompton. My journey to St. Paul's was the longest single journey I have made since buying my Titanium Orange Brompton. I had already decided by the time I reached St. Paul's that it was a great bike. I loved riding it and it felt agile. The titanium performed wonders on the uneven and potholed roads of the West End, dampening and absorbing vibrations.

It was while we were waiting to go that a heard the telltale sound of a bike falling over. I glanced to where I knew I had left my beloved Titanium Orange Brompton, just to see if all was still good in the world... Luckily it was not my bike and I gave a sigh of relief. If it had of been my bike that suffered this awful fate, I feel I may have showed myself up slightly. I cannot say for certain what exactly this would have induced but I can imagine!

I suspect I might have placed a hand up to a furrowed brow. A quivering of the lip would have ensued, making the words I surely would have uttered that bit more embarrassing - "whoops a daisies!" Like one of those Victorian ladies with corsets strung too tightly I would have fainted. It would have been terrible and I can only take comfort that it wasn't my bike that fell over. Am I a little too precious with my new bike?


At 11:00 a.m. sharp we set off and with over 100 riders we certainly made our presence felt. As always riding on masse is quite an empowering feeling and it is only a shame that more is not done to get people out on their bicycles where possible. 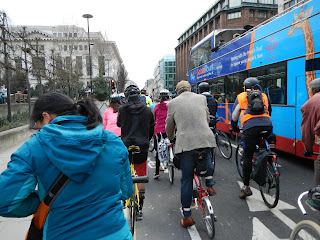 At Guildhall we circled the square and it was actually great fun doing so. Bemused security guards looked on as all sorts of bikes and riders nonchalantly cycled around in a large circle.


Off again we passed through the ever growing City of London. We speculated whether the find would be found to restart the building of The Pinnacle? As we travelled east glimpses of famous buildings such as The Gerkin, Tower 42 and the Lloyds Building caught our eyes. 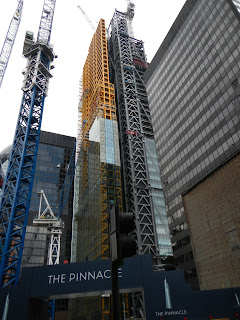 Before long we reached a spot on the Thames many of the Bromptonians had been to before on the Thames Triple Chaser (link below).


Travelling parallel to the Thames we passed the first of a series Victorian swing bridges. The first looked rather rusted and I am not sure whether it was operational?

Passing St Katherine Dock and the Shadwell Basin we could only imagine how busy these locations along the river Thames would have been even 50 years ago. Goods and ships from all over the world would have been busy loading and unloading and a whole army of workers would have been there to make sure all went smoothly. Today things are a much quieter affair and the industrial look is very popular as accommodation.


Further east we came closer to Canary Wharf. A security guard at one of the many check points held his hand out and high-fived many who cycled past. I like to think that he was a cyclist himself and seeking solidarity with his cycling brother and sisters. 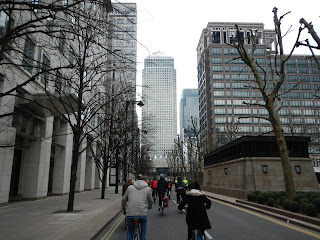 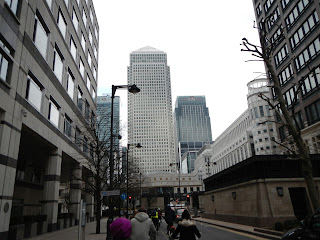 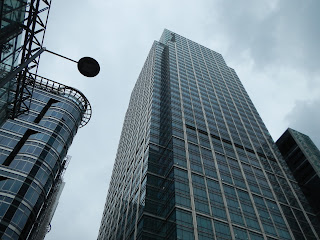 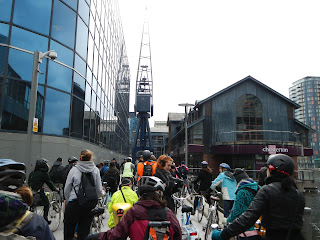 The north side of the Greenwich foot tunnel almost appeared out of nowhere unexpectedly, perhaps due to a different route to it than we had taken on the Triple Chaser? The Bromptonians put their bikes over their shoulders and ascended the stairs. The Titanium Orange Brompton felt much lighter and I made this fact quite freely to other Bromptonians in front of and behind me.


Coming to a small jetty that reminded me of that bit from 'Titanic' I could not resist getting a photo of the Titanium one. 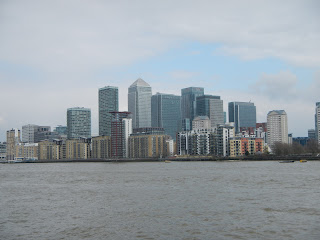 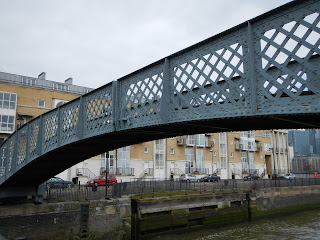 It was a very cold day but the views were excellent and crisp. On flat stretches I accelerated for as sustained periods I could. On one good flat section I reached 24 mph before having to slow down. I feel I could have gone faster still but I ran out of road. The 12T cog certainly does make a little contribution to the feeling of being able to go faster but it could all be psychological of course. 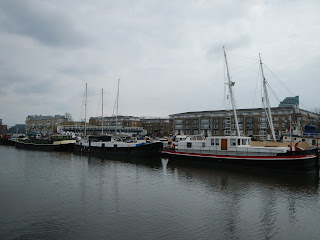 Today was a fairly short ride and the end point a pub called 'The Angel' in Bermondsey came upon us quickly. Taking a few more photos many of the Bromptonians headed west for sanctuary out of the cold and something to eat. 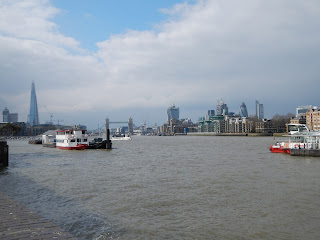 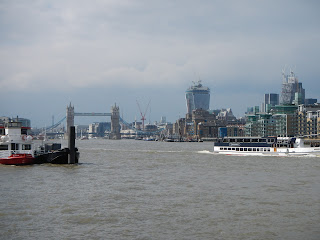 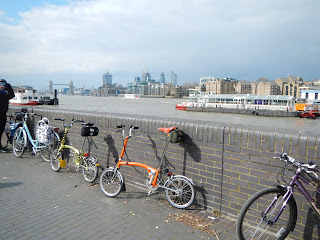 Passing Tower Bridge we found plenty in the way of places to eat. We ended up at Cafe Rouge where refuelled and defrosted we had some food, chewed the fat a little more before going our separate ways.


I headed back to Oxford Circus with my riding partner iCrazyBee and another sensible orange Brompton owner, Steve before saying our goodbyes and looking forward to the next time we can go out on an adventure.

The Titanium Orange Brompton is a lovely bicycle to ride. I cannot really add any more adjectives as the list would just go on and on. I suspect it will be coming with me on many an adventure and I really must get over this not taking it in the rain lark! The whole point of buying a Brompton is to use it whenever you want. Riding it today has left me feeling I want to ride it all the time, perhaps only not using it in really grotty winter weather? I suppose I can use it in whatever way I decide. It might be a fair weather bike and it might not be. I am just glad I have two Brompton bicycles!!

I really enjoy the IBikeLondon rides. They are are great bunch of people and the rides are relaxed, welcoming, well organised and great fun. Going on one of their rides you are always assured of seeing something different. Today was no exception. If you are a Londoner or within reasonable commuting distance, you might want to go along to their next ride. If you see me, say hello!