A few weeks ago Mark W and I went on a recce for his 'Thames Triple Chaser. That in itself was a really great day out (I have posted a link to that blog entry below) but today was the real thing.

The weather was not good first thing this morning. My journey to the meeting point - Charing Cross Station - was punctuated by light rain, heavy rain and then back to light rain.  When I got off the tube at Charing Cross I momentarily got lost and somehow ended up on the Strand? My legendary sense of direction had already let me down somewhat! With my bearings found I saw that Charing Cross the Railway Station was in fact just a few hundred yards away!

Upon entering said Station I immediately saw Mark and his 'Green Machine.' Another benefit of owning a Brompton when meeting someone at a railway station or similar, is that one does not have to resort to wearing a say, pink carnation in ones button hole or like a Cold War spy memorising a sentence such as, "in Moscow it is cold During March but in London it rains."

Before long all the quite mad brave Bromptonians were assembled and we set off into the rain that was almost a constant and close companion for the day.

After negotiating some busy junctions we arrived at a rather good photo opportunity - Tower Bridge. I thought to myself that it would be several hours before I passed under this very bridge on my way home on the Thames Clipper from Greenwich.

The rain and wind were like a tag team and while I was busying myself trying to take arty shots of Brompton, Bridge and Thames, my Original Orange Brompton was blown over closely followed my Mark's Green Machine. I stoically carried on and nonchalantly waved I hand in its general direction in a way Charles II might have and said, "I am not overly concerned, as I have another." Of course dear reader I was concerned! In fact like Sonny from the film 'The Godfather' I instinctively put my hand to my mouth and bit my knuckle. Had I of taken my new Titanium Orange Brompton to have this happen, it might have induced a tear and much wailing! 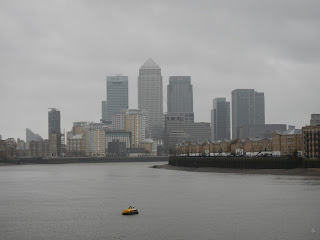 Along the route we took sanctuary in a Victorian Band Stand. I wonder what they would have made of us? In the distance Canary Wharf could just be seen through the haze. 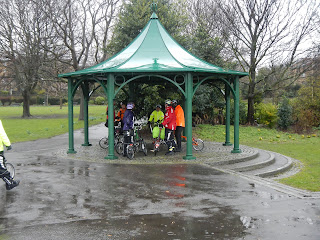 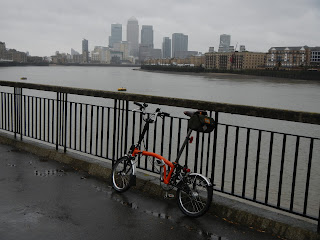 This part of London really does present itself well in bad weather. It is grainy, urban, industrial and I am sure that a bright sunny day would be lovely but it would not afford the same backdrop to this landscape. The old and the new is on the whole mixed pretty well. The former industrial buildings of the past now have a modern twist. The noisy and busy jostling of the past have been replaced with gritty urban dwellings (if you can afford them). Some people hate them but at least many of the features of the past have been preserved rather than being torn down. The Further we cycled east along the River the more it reminded me of the eerie book, 'The Wedding Ghost' by Leon Garfield. 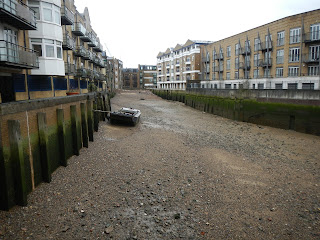 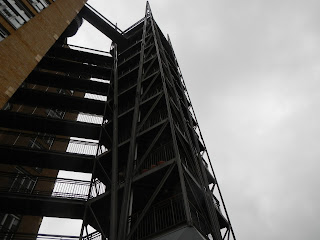 Two and a bit hours in to the ride we stopped at an urban farm. There I had perhaps one of the best chicken sandwiches and no it did not contain horse! It was also here that a wise man named Ian showed us details of a possible trip for next year!! 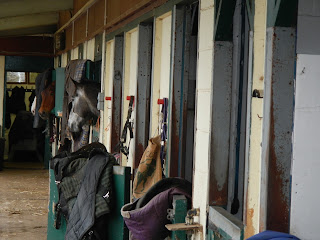 Reaching the north side of the Greenwich foot tunnel we descended below the Thames and walked and part cycled (although you are not allowed to) along the Greenwich Foot Tunnel. It is well worth a visit. 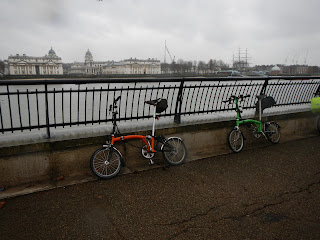 At the other side we rode up the hill in Greenwich Park before placing our Brompton bikes in their time honoured place. 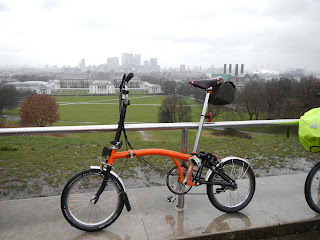 It was our intention to travel on the River via the Woolwich Ferry. Despite speeding up when we saw that it was being loaded, it set off just before we got there. We therefore decided to go under the Thames again but this time along the longer Woolwich Foot Tunnel.

This tunnel is very similar to that at Greenwich but much better. The tunnel at Greenwich is I imagine fairly well used by tourists but this one further east, in the middle of nowhere and with little in the way of anything touristy is distinctly less busy. This is a shame as it is a better experience and provides a better appreciation of the incredible engineering prowess that build it all those years ago. More so than the Greenwich foot tunnel, this one is well worth a visit!

After lots of cycling in the rain,  I came to the realisation that my dead butch Gore-Tex trainers were not the first word in waterproofness. In fact they had let through copious amount of rainwater and puddle splashes! I can tell you that as I type this blog entry I am staring directly at my feet and feel lucky that I managed to get home when I did, as they would have surely succumbed to Tench Foot.

Reaching the Thames Flood Barrier gave us the chance to view a more modern engineering marvel. With some more arty photos taken in the drizzle we retired to a spot of luncheon at the nearby cafe. After warming up, eating, drinking, chewing the fat and drying off we continued our journey. 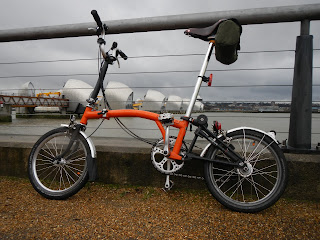 We arrived at the Emirates Air Line and the six of us that remained to the bitter end boarded one of the cable cars. With bikes folded we entered and just about fitted inside. The windows were covered with raindrops but it in no way spoilt the view. As always on forms of transport like this the comment was made about what would happen should the cable car plummet to the ground? One occupant remarked that we might be alright if it landed in the Thames. With this thought in my mind I looked outside to see just how far up we were going.

Getting in the cable car was negotiated pretty well but we all soon realised that getting out might be a problem. As soon as the doors swung open we were out one after the other. It reminded me of those films you sometimes see where soldiers leap out of the back of plane. Luckily we all survived. 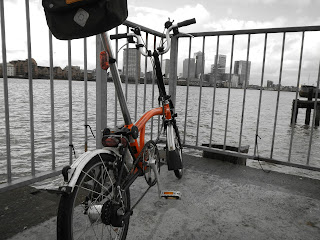 As we headed back toward Greenwich the sun started to make a welcome appearance and by the time we reached the stunning buildings of the old Naval College, spring had momentarily returned.


We retired to a local riverside pub/restaurant that brewed its own beer. Notices on vast copper vats informed that certain beers would be ready for consumption in April. 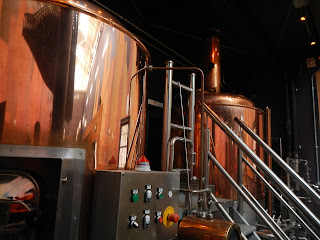 My riding partner iCrazyBee and I said our goodbyes and set off for the return to London on the Thames Clipper - a much more civilised way to travel back. We were treated to some great views and both of us were kept busy taking photos for our respective family albums. 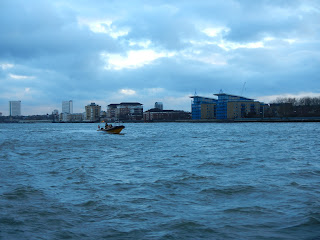 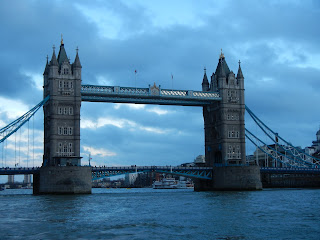 Moored next to HMS Belfast was another more modern ship. I am not sure why it was there but will try to find out. 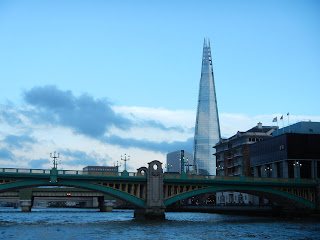 The Thames Clipper took us to Embankment. We got off and made our way to the Tube Station of the same name. We said our goodbyes and looked forward to more joint adventures soon.

This was another really good day out. The weather was rotten but with the correct wet weather gear it was fine. This is one of my favourite London rides and I don't think I would grow tired of it. I would love to do it in T-shirt weather to see what vibe I get from the gritty industrial river section. As always a ride is made better by the company of fellow riders. Mark's ride is for me at least set to become a classic and one I am sure will be tweaked and repeated. As always I now ponder the question, when's the next ride?!