Yesterday, before I went on the Ibike London ride I paid a visit to The Shard. My partner in crime iCrazyBee kindly looked after my Brompton while I was doing this.

I have watched The Shard with interest as it ascended the London skyline. You can do this from almost all parts of London as it can be seem for miles. Some people despise it and hate the fact that it will be so visible from so many locations.

It  is a 95 storey building standing some 309.6 metres tall and is the tallest building in the European Union with only Moscow's Mercury City Tower being taller. 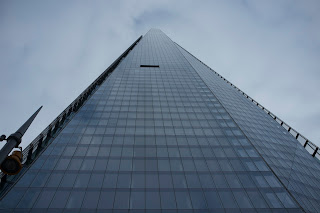 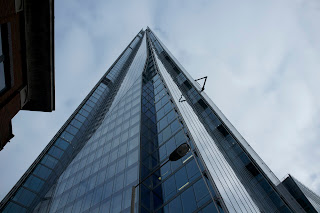 A pre-booked, specific time slot ticket was bought for me ages ago. Printing it off at home I thought that as it mentioned that I could simply scan the barcode at the entry speed gates at the ticket office, I wouldn't have to wait around too long. Unfortunately, this wasn't the case and a snake-like, Theme Park line wound its way towards the ticket office. I was mildly disappointed at this as my 09:00 -09:30 time slot did not get me inside to the ticket hall let alone anywhere else. It begs the question why have a time slot?

Eventually inside one had to go through some security procedures. small items had to be placed on a tray along with ones coat which was passed through a scanner. Once done you then had to walk through a body scanner before encountering another Theme Park feature - a photograph. My ticket cost over £24 and I didn't really want a photo of me smiling to a backdrop. One couple before me asked if it was free. The photographer said that taking it was free but to get the photo you would have to purchase it. They muttered and walked past. I merely commented that I was with them and did likewise.

We travelled in two lifts to reach the viewing platform. These travelled at incredible speed - two floors a second and although not unpleasant, you could certainly sense their swiftness.

Once at the viewing platform I was surprised at how busy it was. Every available window and tell:scopes - digital telescopes with touch screens allowing you to zoom in at points of interest and get information about them - were taken. 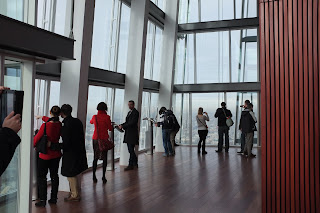 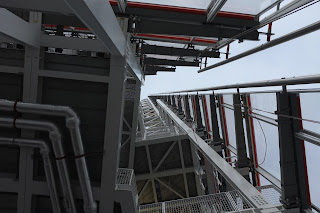 The view. Well quite amazing. It is quite overwhelming to see London in this way. Perhaps because I had visited Tower 42 last summer, this view was perhaps less potent, but nonetheless it was breathtaking. The Theme Park continued however with piped instrumental music. 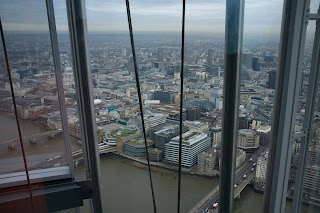 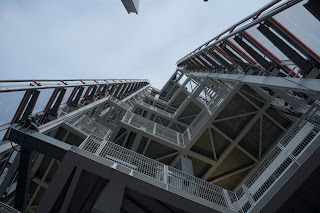 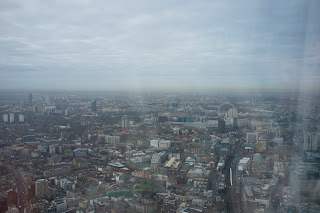 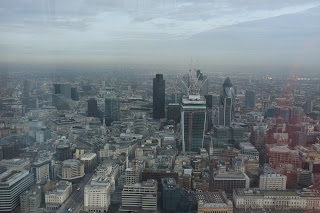 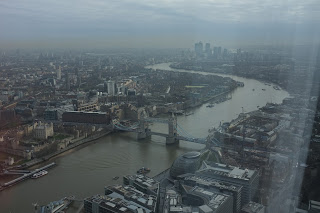 After a good few circuits and many photographs later I decided to call it a day and headed for ground level. On my way out the reminders of Theme Parks persisted as like coming off a ride one could see ones photograph and just like at a Theme Park, have a look and then wince at the eye watering price. A small shop sold souvenirs of The Shard but it just felt tacky to me.

The view from The Shard is incredible but taking my entire family would set us back almost £100 and I am not sure I think even that view is worth it? Yes, you can stay as long as you like and the tell:scopes are brilliant but the word tacky, used in this blog once already is how I would describe the The Shard. I am one of those people who perhaps views The Shard as one of the those ghastly cut crystal ornaments that cost an arm and a leg and merely for show. From it you can obtain an incredible view of London but I suspect The Shard itself will not be viewed as an architectural classic in many years to come.