The wheels are both the new double walled type that were introduced for 2013 bikes. First impressions are good. They look better than my old wheels however saying that the original wheels have been on many adventures.

Everyone seems to say that the new rims are slightly heavier than the old ones. I don't have a suitable scale which I could weigh them on but if anything, they feel ever so slightly lighter to me. I could of course be wrong. 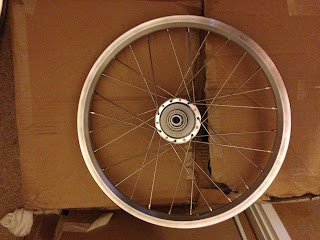 I decided to buy a new front wheel as well as I didn't really like the idea of having a new rear wheel and the old front. Again it looks pretty good to these eyes. 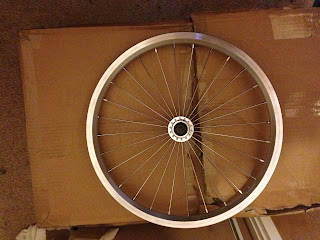 I have put both of the wheels on and taken the bike for a short spin around the block. The bikes does feel pretty good and the gear change is back to what I remember it being before suing pressure washers, degreasers and what have you. Never again I tell thee!

The rim tape is different too. It is yellow for a start, instead of the blue we were all used to. It is also a much better fit. I have been told that Brompton will eventually use a fabric rim tap at some point but this is a step in the right direction.

Putting my London Edition Marathon Plus tyres on to these new rims was easy. There really wasn't the huge struggle putting them on these new rims when compared to my old ones. Putting Marathon tyres on was not easy and this can only be a good thing especially if one is unlucky and gets puncture out in the field. Performing this task will be easier. 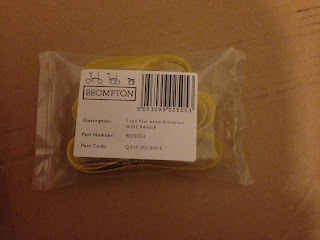 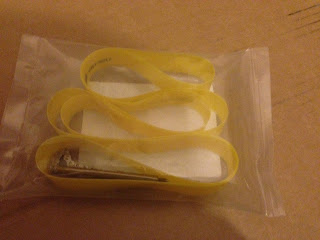 Another purchase was a new M-type handlebar and the new 2013 back foam grips. I bought these I intend to replace my current brake levers, which are now quite rattly. They say that you should change your handlebars after every three years or so many thousand miles - probably not really needed. I took the view that if I fitted some new brake levers and grips I may as well go the whole hog. 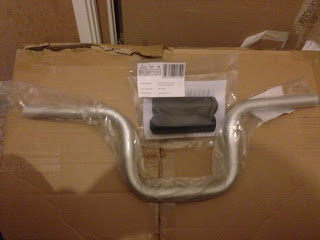 I have not decided whether I will be getting the new Brompton brake levers, the version they replace or  a different make. I will need to think about this a little more. The only other jobs I need to do is to replace the gear and derailer cables, replaced the bottom bracket and perhaps the chain set. I will again have to deliberate more about whether I do this.

With a new Orange Titanium Brompton on the way you might be asking why I am spending money on my old bike? Well, I don't really want this original Brompton to go to seed. I want it maintained and remain as up to date as I can. It is my intention to use this Brompton on journeys I don't want to take the gorgeous Titanium one on. The addition of the new wheels has already given this bike a new lease of life and long may it continue.