This morning I went on a ride I had originally turned down. With very little cycling in the past two weeks due to a very heavy chest cold and a general feeling of woe is me, I decided that a good brisk cycle would do me some good. 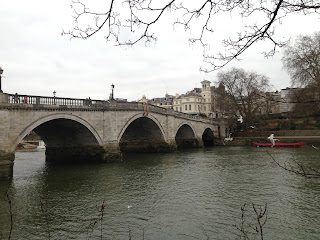 The meet up point was Costa Coffee at Richmond and once there I saw our Commander and Chief Mick B. Unfortunately, as he had been suffering from a horrid bug he quite understandably didn't feel like cycling. He treated me to a cup of tea that was so large the cup had two handles. If truth be told, I have been to restaurants and had smaller bowls of soup!

Eventually those of us foolhardy enough to brave the elements set off on a very satisfying ride along the Thames, over it and through Richmond Park. 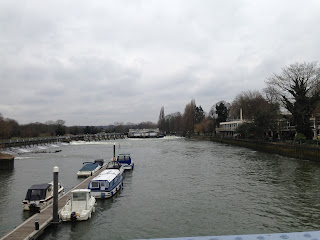 The route took us on some of the dirt tracks - nothing a Brompton cannot handle - and it made an interesting change to the roads. I must confess that I still prefer sticking to the roads when going through Richmond Park as the Brompton is of course an out and out road machine at heart.

One particular hill was very demanding and it was made worse by the dirt track rather than Tarmac. Three of us ascended this serious incline without getting off the bike. More training perhaps for another time? My partner in crime iCrazyBee is getting better at going up hills but is now seriously considering a gear upgrade from 3 to 6. Should help?

I don't think I have mentioned the weather. It was bitterly cold, probably 1 degree but it felt much much colder, certainly dipping in to negative figures. My Helly Hanson balaclava was almost worn at one point but it stayed in the saddlebag.

Going back towards Richmond we went down the infamous Nightingale Lane. This is a lane with a seriously steep and sustained climb. At the bottom I was the only one of the three of us left to have a go at going up it again. If truth be told I had been looking forward to it. Ascending it for hand second time felt a great deal better and dare I say easier than my first attempt a few weeks ago. I do think that with hills one has to have the right mindset. Setting off thinking you cannot do it does not really work for me. I managed to get to the top pretty quickly and even had a gear in hand. If you look at my ride data below and zoom in to the map you will see that I got all the way to the top - honest.

It was a good ride and I am glad that I went on it. The chest cold of the past couple of weeks has really set me back as far as getting in some miles. My commute begins again tomorrow and I am vowing not to use the car for this journey for the next five weeks. This is going to take some serious planning on my part as there is only so much I can carry on a Brompton!

Next Saturday I have another great ride to look forward to which will take in the famous Box Hill. Really looking forward to that and although I will not have my new Orange Titanium by then, I will have a few new parts to fit to my original Orange Brompton that I hope will make things better all round.