IBike London Love2Ride on a Brompton.

All of last week I have not so much as looked at my Brompton let alone taken it on my commute. I have you see been suffering from an extremely bad chesty cough/head cold bordering on consumption. The worst is perhaps over but this morning knowing that a gentle ride might do me good, I decided to venture out on to the streets of London. I took the view that if the cough/consumption persisted during the ride, at least I might be moved to pen a poem about it all, like one of the greats from the 19th Century. (Lots of them had consumption too).

So, as lonely as a cloud I met up with a few familiar faces at the allotted hour and after a ride briefing we were off. Riding through Hyde Park we snaked our way towards Buckingham Palace, past the Houses of Parliament, St Stephens Tower before entering some sort of tunnel (the location of which escapes me - well you know what I am like with directions) where graffiti artists committed their visions to the walls. 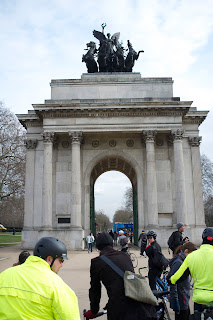 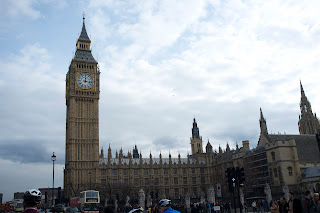 You may be thinking that yours truly would be a little out of his depth in this ultra modern urban 'street art.' Well you would in fact be wrong. I like many types of graffiti and have hundreds of photographs I have taken over the years. One of my favourite locations as a child was when I was taken to Portobello Road Market on a Saturday by my dad. Under the flyover was and still is the home to sometimes quite stunning art. My dad had a very different view and often remarked that he didn't fight the war for this particular freedom.

One artist was very much the showman. In true street photographer mode I look a photograph of him in full flight, spray can in hand. It was an okay shot. Seeing me, he gestured for more photos. I took them. He gestured for even more and posed very obligingly. I was getting in to this. I was almost about to say, 'for the next photo, I'd like subtle but sexy.' He must have been a mind reader as he got a cigarette lighter from his pocket and ignited a jet of paint spray from the tim he was using. It was all terribly excited stuff and I thought to myself, I must give that a go when I get home. Is that bad?

Further up the tunnel one of the ladies who was a marshall for the ride had a surprise. She had committed some of her own art to the wall. It was very good. A lady riding a bicycle with the title, 'Yeah bitches.' Obviously the urban rebel was coming out in me, as when me moved off, inside my head I was saying the words. 'yeah bitches' in different ways. I had to check myself as otherwise it might come out at the wrong moment!

We stopped at the Imperial War Museum for a while and many of us chewed that fat while other drank tea and coffee. I wanted to keep moving as it was chilly standing around.

Soon we were off again and before long we saw a WWII Russian tank, in the process of being painted white, sitting in a patch of land on the corner of a street. The tale we were told was that not long ago a father bought his son this tank and left it on a piece of land he owned. Despite protestations by the local council, he was allowed to keep the tank on his land. To this day the gun turret points in the direction of the council offices.

Our next surprise was a windmill that seemed totally out of place in it current location but must have been in the perfect one when built. 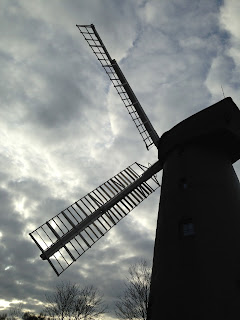 Before long we were in Battersea Park where we had our final stop before heading across the River, through Brompton Cemetery and on towards the end location, the Builder's Arms in Kensington. 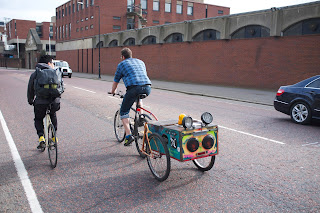 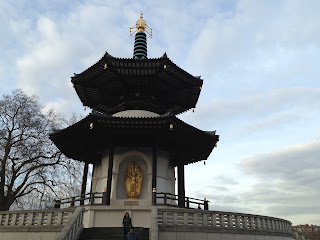 It was a really good ride and it served it purpose of brushing away the cobwebs from a week long Brompton exile. I actually felt better than I had all week. One success in the field as it were was my new Carradice Barley saddlebag. It easily held by larger X100 camera, water, food, toolkit and had load more room to spare. This really is going to be a useful friend on all those night rides and day rides in general. 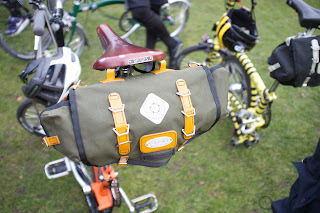 I forgot to take my Garmin Edge 200 with me today so I don't have any ride data but you can see the route that was taken by clicking on the link below.