On my travels south of the River, usually to see a friend or two who both live in Dulwich Village, either on route or on my return (or both occasionally) I swing past Mandela Way to see - and take a photo or two - of the T-34 tank sitting on the corner of a plot of land. As of last week the tank has been removed for restoration. 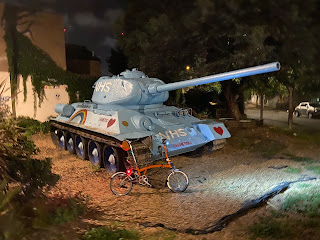 The tank itself - apart from being a bit of a local landmark for years - is a decommissioned former Czech army tank that somehow found its way to south London. It is said that its owner could not obtain planning permission to develop the plot and placed the tank in it with the gun turret pointing in the direction of the council offices.

Since then it has been painted many times over the years and every few weeks it transforms into something else.

It has now been removed for restoration which the owner said might be a week, or might be two years. Let's hope it doesn't take two years as it really is a lovely thing to see! 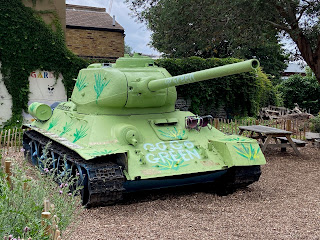