I think you might be living a pretty sheltered existence if you had not heard about the Brompton reveal for its latest T Line. This has been much fabled specification has been around for some time now and Brompton did a great job of stirring the excitement. Is it a triumph or terrible idea.

I will qualify this by saying straight away that I have not picked one up or ridden it. My take on this is what I think it represents in the evolution of the Brompton bicycle.

We have recently bee treated to the P Line - a new update to the existing Superlight perhaps - and as a friend already has one of these, I have seen it ridden it and liked it. It is perfect for city commutes and beyond. I would like more than 4x gears and more colour options but it is a thing of beauty.

The T Line is not just an evolution and there are so many changes and additions, it would be pointless to list them here. If you want to know more about that, an internet search is definitely your friend. I will say that seeing it in the flesh sitting there in Brompton Junction, it is a thing of beauty. I am sure that like the P Line, some form of colour options may one day follow. If they didn't however, it would still remain a stunner to look at.

The price tag for the 4x speed is not much short of £4000 - a great deal of money for any bicycle but if you want the ultimate folding experience, I suppose this is where it is at.

I know lots of people - existing Brompton owners - who are getting one, the decision made simply by the specifications and looks alone. In fact the secondhand Brompton market will be flooded with people selling off their existing bicycles to fund it. My friend with the new P Line has been amassing a collection of all versions of the CHPT3. He was worried on Tuesday as to whether or not he would got an email from Brompton telling him he had won a ballot to be able to place an order for one. He said that if he didn't and I did, I was to place an order for it immediately. Luckily, he was able to place an order. The first T Line bikes should hit the streets in about three months time. Brompton will sell every single one they make. They will also sell every single P Line they make.

Will I be buying one? As you know I have three Brompton bicycles: Orange Black Special Edition, Orange Superlight and a Cloud Blue. I love all of these bikes and wouldn't want to part with them. I am very happy them and just don't see the need for another.

The T Line is a complete triumph for Brompton and they should be congratulated for it. I know that looks are not the only thing, but I cannot stress enough how good they look in the flesh. The T Line weighs in at 7.45kg but you know that in a few years time, after market accessories will bring that weight well below 7kg. Very exciting times for Brompton and if I were marking their report card, definitely an A*** 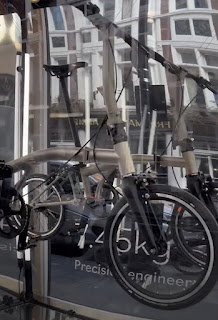