This morning I was up bright and early and off to Baker Street tube station to meet with with fellow Brompton owner, fountain pen enthusiast and gentleman that is, Mr T. He had contacted me for some advice on all things tyres and I was able to gift him a pair of new Marathon Racers (a very good tyre as far as I am concerned). He was able to get them fitted to his bike later on that day which was great. 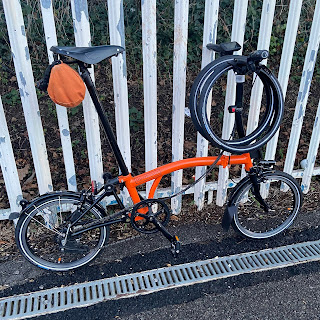 The meeting point for Nicks London CTC ride was the cafe in the Inner Circle of Regents Park. I have some form in both Regents Park and Hyde Park for getting lost as a child. As an adult, believe me I am but a step away. I ended up at the cafe overlooking the tennis courts. This was empty and the staff were very friendly. A particularly good mug of tea and ever better giant oat/raisin biscuit later, it dawned on me that I might be in the wrong cafe as I was all alone. I set off, suitably refreshed, and found the actual cafe about 100 metres further along! 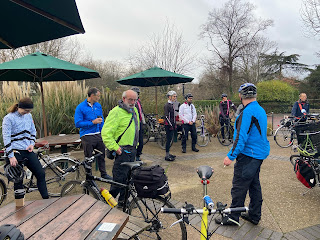 Jenny, Chris, Ronnie and Charlie were all there on their Brompton bikes, with Bob on big wheels, and later on Natalia also joined the ride.
After a brief safety talk the assembled mass of cyclists on all manner of bicycles and from all sorts of different organisations were off. The weather was a little chillier than it had been of late but the sun hanging low in the sky, trying to peak through the clouds was a lovely sight. 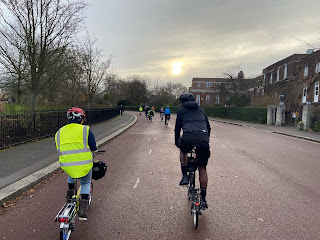 Our route look us out of Regents Park and down through Hyde Park. From there we passed Knightsbridge, South Kensington, Brompton and over the Thames across Albert Bridge. 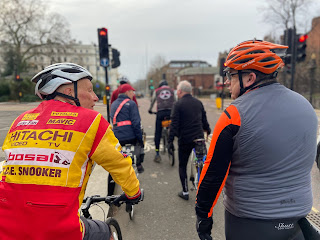 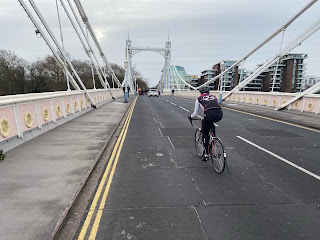 At Battersea Park the the Peace Pagoda I propped my Brompton for a photo as I knew that the rest of the cyclists were a way back. I had to wait for the view to be unblocked by a lady - with her personal trainer - who was doing what I can only describe as frog-like jumps from right to left. It was a little comical and my first thought was save the money and just go for a walk. My second thought was, no spend the money and buy a Brompton! 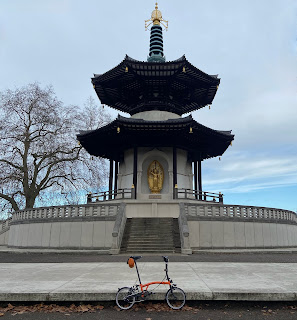 At Battersea Park we regrouped and this brought about many photo opportunities for the Brompton participants. Without being told, all the Bromptonians parked their bikes in a nearly formed line, ready for lots of photos. 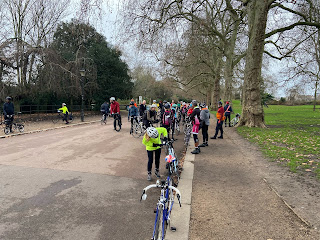 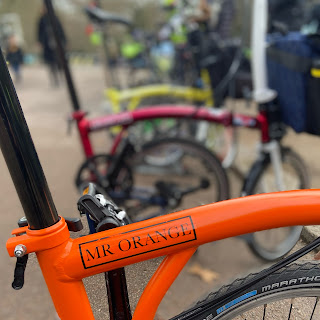 Setting off again we cycled south from Chelsea Bridge and around the Oval cricket ground. 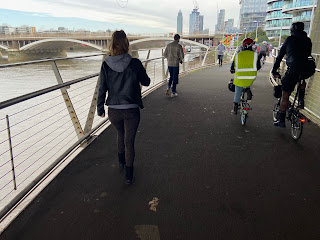 A painted wall caught my attention and a section painted yellow caught Jenny's eye. There really does need to be a self-help group for us Brompton types. With all the photographs we take, it is a wonder we get anywhere at all! 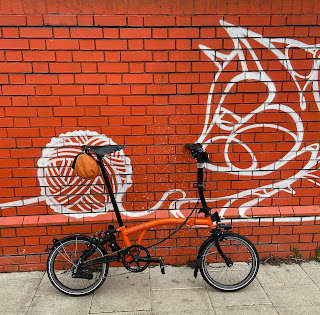 Cycling through Burgess Park we regrouped again and I watched a chap practising his serve (which was good to say the least) on an outdoor table tennis table as he waited for friends to arrive. Apart from his serve it was his paddle that caught my eye, as it was completely transparent. 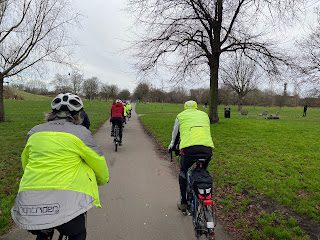 We arrived at Greenwich and the Cutty Sark almost bang on 11:30. I marked this last junction and made my farewells. Once the Tale End Charlie had uttered the words, 'all up' I cycled back to central London. 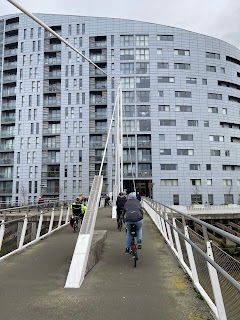 On my way back I passed Millwall Football Stadium and stopped very briefly for one last photo. 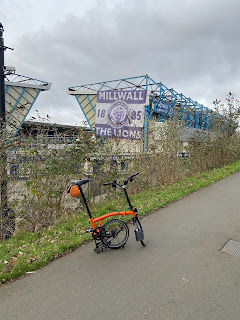 In all I clocked up just over 22 miles and it was a lovely start to 2022. A big thank you to Nick for organising and leading the ride.  Until next time, stay safe out there people!