Yesterday was a Brompton Club ride to Chislehurst Caves. I was due to visit another gathering I attend which is indoors but when I got up, saw that the sun was shining it felt like a shame not to spend it cycling. So I headed off into the sunshine.

The meet point was the London Eye at 12:00. This was a little later that I would have preferred but the with the weather being so lovely I didn't mind. London was heaving and it seemed that everyone and their uncle was out. Trying to walk my bike over the Millennium Foot Bridge took ages as people stopped to take photos of the view, themselves or just to standing to enjoy the view and take it all in. 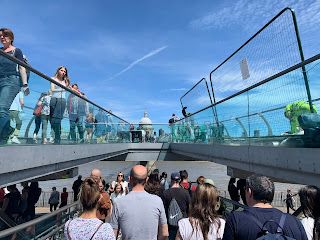 At the meet point there were actually two groups of Brompton riders waiting. One lot under the shade of a tree and the others my the river. Saying hello to a few people under the tree I spied my old Brompton bicycle. It was great to see it again (and its owner of course) but I am not sentimental enough to think I wished I still owned it.

Dr John and Andrew were there and both in good form. We chewed the fat for a while and quite normal for a Brompton ride, eyed up what bikes and accessories everyone else had. 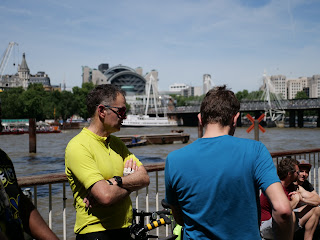 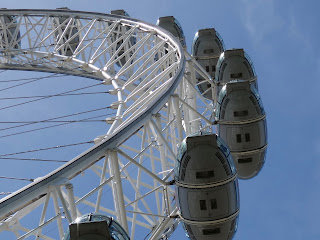 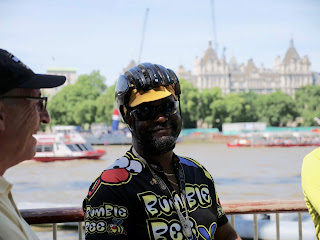 Our ride leader was Jenny with Simon acting as the tail end Charlie. After another rider and gentleman that is, Chris was fashionably late, at 12:30 we headed off.


The route was urban but on fairly quiet roads. I had taken my big camera with me but got bored of taking photos and decided to have a chat with Dr John, Andrew and a few of the other riders instead. Perhaps a smaller camera or just my iPhone might be more suitable? 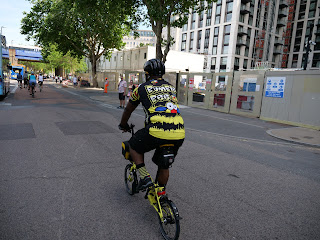 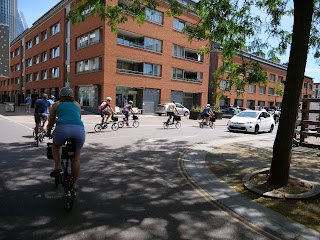 It was a slow pace by what I have become accustomed to but it is not always about the number of miles cycled or how fast you get there. As I cycled along and certainly by the end of the ride when cycling home, I reflected on this a little more and concluded that I really should do more of these rides. 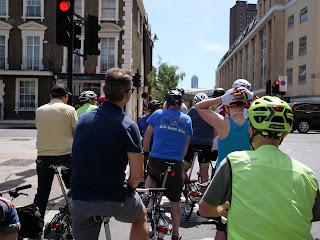 Of course as I thought about that 'The Old Vic' theatre came into view. At this point on so many night rides to the coast - namely London to Brighton - Dr John and I turn right at this theatre and it marks the start proper of our nocturnal adventures. I made mental note to put a date in the diary for one of these. 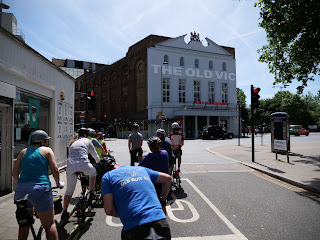 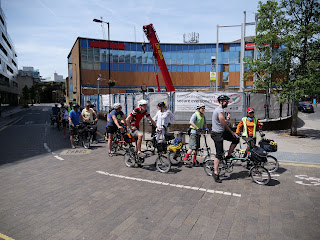 There were lots of Brompton riders out on this ride. For some it might have been a challenge, while for others it would have been much easier. The is the beauty of these rides. They are inclusive. This is possibly why I have stayed very clear of road bike clubs which in my experience are the total opposite. 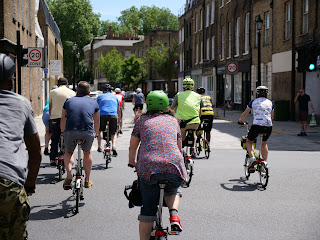 At one point a gentleman with a very nice Brompton fitted with a large 8 x gear hub (I think it was 8) had a mechanical issue. This he sorted out at speed and with total confidence. 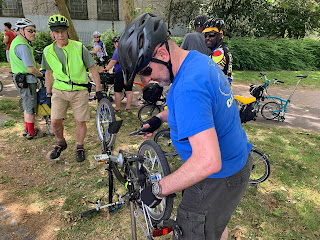 After about 13 miles we made it to Chislehurt Caves. Some riders didn't want to visit the actual caves and took sanctuary in a nearby pub. Others went for the cave tour. I along with Dr John and Andrew made do with the Cave Cafe.

Wanting to get back I decided to put a central London tube station into my Wahoo and head off. Dr John and Andrew joined me. 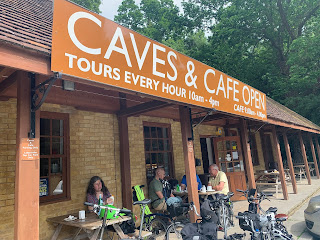 The three of use riding together again was great. We covered the ground well and made it back to central London in good time. 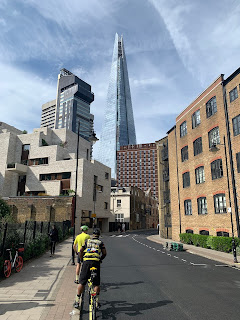 We all got onto the same train. Andrew getting off first then Dr John and then me. It was a lovely ride  and I enjoyed it. It may seem strange cycling to Chistlehurst Caves not to go in and see them, however for me that was not the point of the ride. The journey is as important and the company more so.
Seeing my original Orange Brompton made me think how far I have come. When I first bought it I was pretty much cycling on my own covering fairly short distances. Wanting more, I eventually found more and more likeminded people and went on more and more crazy adventures. Back in September 2010 when I had just ordered my first Orange Brompton (that was on this ride) on my first blog post I wrote at the end, 'This could be the start of something rather exciting. A Brompton!' It has been that and will continue to be.