Take care when cycling on your Brompton in Richmond Park!

I have taken my Brompton for a few circuits of Richmond Park more times than I can remember over the years. On almost every occasion I have spotted the deer that live there. I have always tried to repress shouting out 'Fenton!' at the top of my vocie when I have seen some Red Deer there - look up 'Fenton Richmond Park' and you'll understand why. It does seem that I will have to keep an every watchful eye out from now on!

Last month, a former Olympic triathlete shattered his pelvis after a deer collided with him as he cycled down Broomfield Hill. Poor Stuart Hayes flew off his bicycle after the collision, smashing his hip, having to undergo surgery.

I will him well, hope that he makes a speedy recovery and is back on his bike again in the near future. I hope that my future encounters with deer at Richmond Park continue to be what they always have been - deer not too far away, walking slowly across the road and providing plenty of notice! 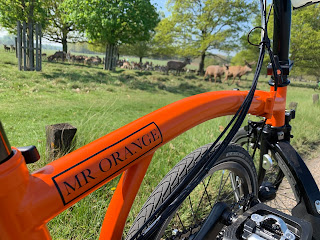