Never a dull moment on the London to Whitstable Brompton Ride

Yesterday was the day of the London to Whitstable ride - although some cycled from Otford instead. As always on this ride it proved to memorable to say the least.

I made the short ride to Trafalgar Square and headed to Charring Cross Station to collect my ticket from the ticket machine. When I bought it I had opted to collect from Whitstable and thought it had to be from there. Told I could collect it from any station - after about 7 years of thinking I couldn't - I did!

Back to Trafalgar Square and Mark, Dr John, Ian, James and one of Mark's friends on big wheels were waiting. Wasting little time we headed off promptly at 07:00 into light rain that got progressively heavier as the morning went on.


Those that met at Trafalgar Square had opted for the longer route that would see us cycle just over 26 miles to Otford. The traditional route was 29 miles but Mark had wanted to mix things up a little and it allowed us to pass near Down House, the former home of Charles Darwin. We had been warned that there were a few hills. In addition, we needed a purposeful pace to get to the 'Pond Cafe' at Otford by about 09:15ish if we wanted to partake in a hobbit-like second breakfast.

As we passed, The Oval cricket ground I spotted the Nightrider 2019 London direction markers that were for the ride taking place later that evening. This was one of the first night rides I had gone on.

We reached Dulwich and past Dulwich College. I thought about the former Old Alleynian, Sir Ernest Shackleton and what he might think of our small wheeled adventure? I was afeared it may be less than kind so gave him and the college a swift two fingers as I cycled past.

The urban gave way to a more countryside setting and the rain started falling a little more heavily. At one point on a narrow country lane our path was totally blocked by what looked like builders waste - bricks, rubble, wood - that had been fly tipped on purpose across the road. Cars would have been unable to get past and it is a shame people are so selfish as to do something like this. Stepping over it carefully one by one we continued our sojourn.


As stated, Mark has informed us that there would be hills on this ride. What came next was a hill that was quite outrageous. It got steeper and steeper and harder than any I have ever attempted. Towards the end - although I did not know it was near the end - the incline was so great I found difficulty in keeping any weight over the front of the bike. A few others were off their bikes. Trying to make a few more revolutions of the pedals, like a young Evel Knieval I started to wheelie and my front wheel began to rise upwards. At this point I was off too and when my feet hit the floor the incline was so severe my bike started to roll back under my legs!  When we rested on the road at the top I think it was Ian who point out the sign that read 25%!! Incidentally, Mark (King of the Hill) lived up to his moniker as he ascended this one on a 54T chainring without a foot down!

We continued to make good progress and made it to the Pond Cafe in Otford at about 09:20ish. Wasting little time we ordered some refreshments which when out in front of us were consumed with great relish.


When paying I spotted a white 'Twix' which I bought and would look forward to later in in the day. At 10:00 we made our way to Otford station where the other half of riders were waiting to join the ride - Andrew, David, Anne, Paul and Catherine. In many ways it was a little like the old days with the old firm out and about again on their Brompton bicycles. 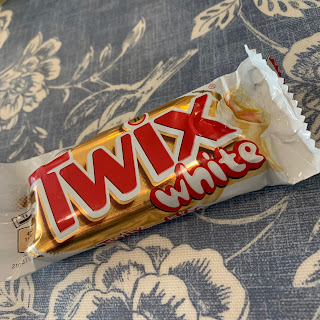 With the first half over for those who had started at Trafalgar Square the second half began and there would be another 48 or so miles to go to Whitstable.  Not having to be anywhere at a certain time the pace could be a little more relaxed. 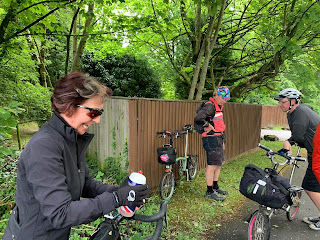 It was lovely catching up with everyone and riding in particular with David and Anne again brought back many happy memories. 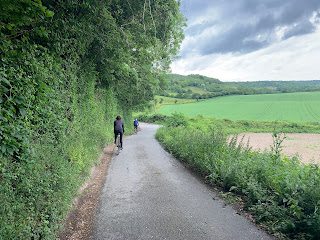 At one point into the ride we spotted a DeLorean. Those of you of a certain age may well recall with some fondness this particular car and its time travelling ability. As Doc said. '...if you're going to build a time machine into a car, why not do it with some style?' 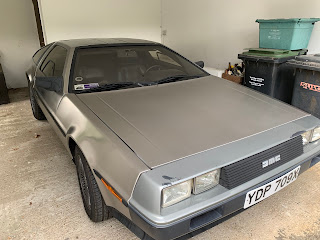 I have seen this car a few times on this ride in the past but never stopped to take a photo. This time I could not resist! 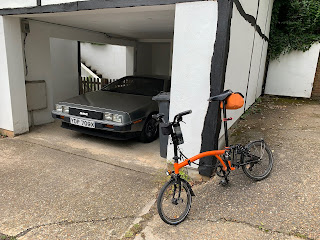 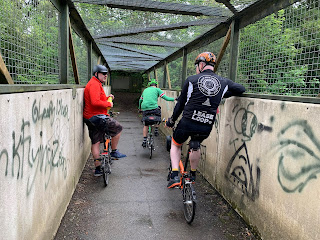 Photo opportunities were not as plentiful as usual mainly due to the whether. It rained, rained a little more and then poured down! It has been a long time since I have got so wet on a ride. My cheap 'boil in the bag' rain jacket was good at keeping almost all of the rain out, but I was getting wet from within! 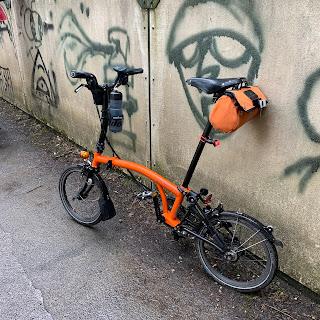 As the rain poured we reached the sanctuary of the 'Kings Arms' at Boxley at the scheduled time of 12:30. With our bikes parked outside and Andrew and I kept watching they were safe. Every so often Andrew and Paul wiped the condensation off the window so we could get a better view! Getting fed and watered we could also warm up a little. As we did, out of the window we could see the rain coming down hard. We therefore waited a little longer before making our departure. 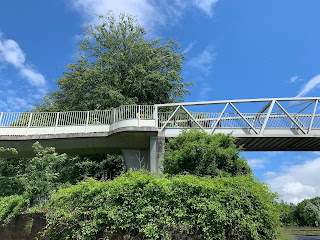 The next few miles consisted of us actually putting our rain jackets away as the sun made an appearance. The scenery was - as always is the case for Kent - glorious. 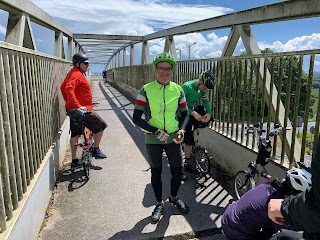 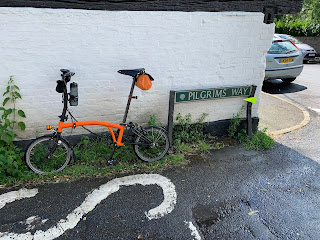 Cycling along was very pleasant to say the least and it was great to hear what people were up to and what adventures they had planned for the near future. 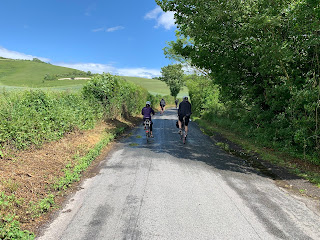 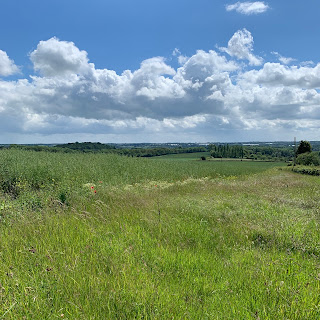 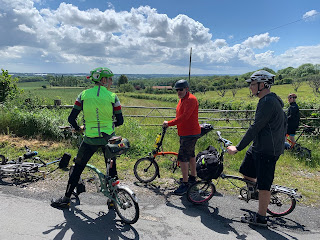 I could not resist taking a photo or two of Mark and David cycling side by side and again it brought back many a previous adventure. 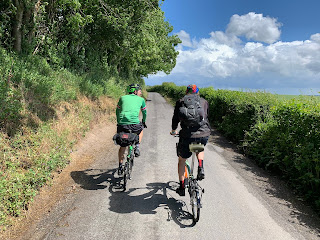 The dreaded Hollingbourne Hill was still to come and at about 7 miles after lunch I was glad I had taken on some fuel at the luncheon stop to aid my ascent.

Hollingbourne Hill is about a mile long in length and has a maximum gradient of over 12 - 16% depending on what you read on the internet. It isn't easy and on a Brompton formidable. At the base of the climb we all assembled and got ourselves ready. After the 25% gradient earlier in the day I have two say that I felt pretty good about this one! A few were up in front of me and I made a steady ascent. I was pleased that I made it up without a foot down. 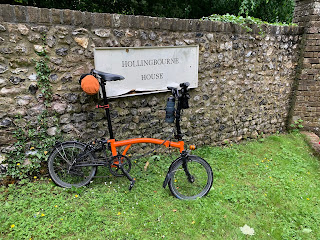 I decided to take a photo once almost everyone had made it up and I think the one below pretty much sums up what this hill is like. 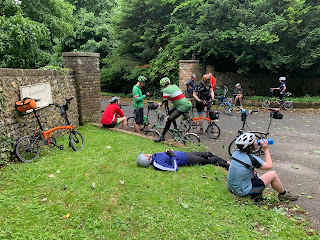 It gets very steep towards the end and if you look at the photo below you can clearly see the road sloping quite heavily down. 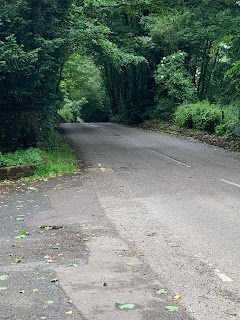 My partner in crime will almost certainly describe his thoughts on Hollinbourne Hill himself but I do have to say that if there was a man of the match award for this ride, it would be his. He had not cycled any distances like this for a few years and now thrown himself back into it. He was to complete the 48 miles all the way to Whitstable. 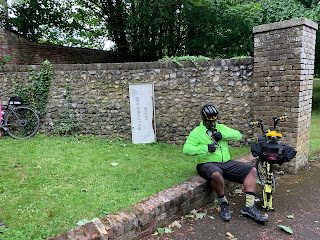 Not long after Hollingborune Hill the rain paid another visit and came down hard. We sought sanctuary under trees while we waited for the tail to catch us up, we speculated as to whether we should go or wait it out. We decided to go. We were already wet I suppose. 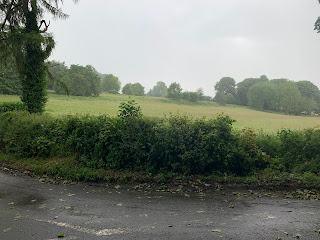 With just over 65 miles showing on my Wahoo and with Faversham and its train station nearby I decided to bail. The legs had many more miles in them and I could have reached Whitstable and more with ease but if I had I would have been home quite late - later than I wanted. I love these rides but I am often torn between staying and getting home.  Together with being a family man and having a daughter with Autism, I get pangs of guilt that I have been out too long. As such when I feel I have had enough, I go.

My dear Friend Dr John decided that he would afford me his company so we made our farewells and headed for Faversham Station. 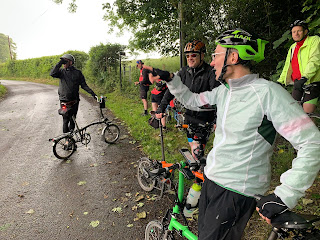 Boarding our train for St Pancras we retired to our seats - opposite the luggage rack so we could keep a suitable eye on our bikes - and chatted about this ride and possible future adventures. At St Pancras we headed our separate ways and I was happy to get home just after 18:30. 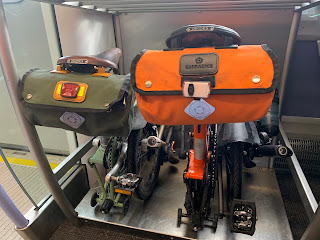 This was a lovely ride and despite not going all the way to Whitstable, I cycled 67 miles. The route was good, the weather made it epic and the company - perhaps the most important element - was great. Many thanks to Mark for organising it and I hope that he decides to put it on again - perhaps sorting out the weather as well. 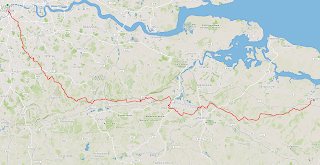