Choosing my wave for the Ride46

A couple of weeks ago I received an email from the people at RideLondon telling me that I could choose the wave I would like to ride in. After forgetting to do this initially I decided that it would probably be best to get this done.

When I logged in I found that  you could choose to ride in the same wave as family or friends already entered into the event - a nice touch.

I choose the individual wave. I don't know anyone - as of yet - who also got into the Ride46 but I always seem to bump into someone I know.

The RideLondon people have been sending lots of emails that are pretty helpful. They include how to fix a puncture and training tips. With a ride length of only 46 miles I won't really need too much training, other than what I am already doing, but they are a good idea.

Since finding out that I gained a place in the Ride46 it has been put to the back of my mind in many ways. The Dunwich Dynamo looms and I feel I need to get ready for that more than anything else. Still, choosing the wave has certainly brought it back in my consciousness and I do look forward to it and the chance to ride around on 4th August on traffic-free roads. 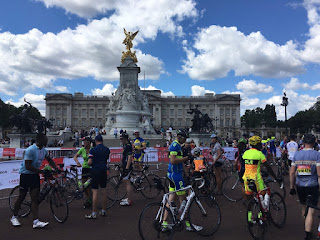