Last night was all set. Dr John and I had agreed that we would do one our respective favourites - London to Brighton overnight. Train tickets had been bought, Brompton bicycles prepared, snacks purchased but events conspired to scupper our plans.

If you have read this blog before you will know that for me - like many others - photos and Brompton bicycles go very much hand in hand with each other. The photo below was the only one I took. 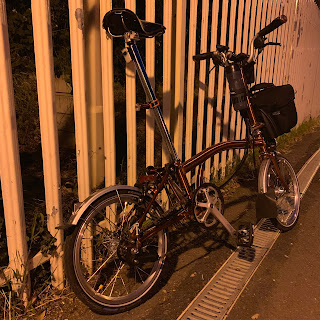 Our meeting point was on the South Bank of the Thames not too far from the London Eye. Dr John was there before me and I arrived about 23:30. After a quick check of our bikes were off earlier than our scheduled midnight start. This was in many way quite fortuitous.

The night was warm with a gentle breeze and near perfect cycling conditions. After a very busy week at work I had been looking forward to this ride - as had Dr John. There was however a problem.

My youngest Orangette had been sent home with a sports injury - nothing serious but enough to be sent home. I had left home a couple of hour before midnight and while I was on the tube Mrs Orange decided to take our Orangette to A & E as a precaution as she was worried. When Dr John and I set off I told him about this and said that I may have to stop and make/take the odd call. Not a problem.

We progressed well. The ride really hadn't got started but it had all the prospects of being a really love nights riding. As we approached Balham I rang Mrs Orange to get an update. It was that there would be over a five hour wait. (It actually turned out to be a great deal longer)! Turning to Dr John I had to tell him that I would have to bail and return home.

We looked at our options. It was 0:33 in the a.m. and our choices were pretty stark. Nothing seemed reachable in time but Dr John spotted a train leaving Euston that would be perfect for both of us, leaving in about an hour - assuming we could get there!

Putting Euston Station into my Wahoo we set off. We had about 10 miles to cover. Now ten miles in an hour was doable, but we knew that when we hit the Clapham area there would be clubbers and lots of traffic that would slow us down. As we peddled hard to make our train, the traffic we predicted was there. Traffic lights almost conspired with each other and as they turned red, I fancy I could almost hear mocking laughter.

The route was a good one and tried where possible to take us on quiet roads but I did make a few wrong turns which slowed us down a little. Knowing we were close we made a last desperate effort and rolled into Euston at 0:29 a.m. We had made it by the skin our teeth.

The train journey was interesting. There were lots of people worse for wear, only too happy to engage in polite conversation. After three stops - I think - I got off and said my goodbyes to Dr John who had a stop of two to go. With about another 4-5 miles to get home I pressed on.

Youngest Orangette rolled in at about 06:00 a.m. and straight to bed, sore but okay. As soon as my head hit the pillow I was out for the count.

I have written before that owning a Brompton has allowed me to meet lots of great people, many of whom have become dear friends. Dr John is very much one of them. We sadly didn't have the adventure we planned this time and from him there were no complaints, only support. A true and valued loyal friend. I feel very lucky.

Two weeks today we embark on the Dunwich Dynamo. This really will be an epic adventure and despite not getting in this last little nocturnal dress rehearsal, I am sure we will both be okay.