Last night I decided to take my Original Orange Brompton out for a change, mainly as I was going on the Regents Canal Loop. Not knowing if things were going to be particularly muddy and not wanting to have to extensively clean my beloved Titanium Orange Brompton, it was an easy choice.

The meeting point was the London Eye. Luckily for me being lit up at night and being a fairly large object I didn't have too much difficulty navigating to it! With all of the riders assembled our ride leader and navigator extraordinaire David gave us a brief outline of the route and before long we were off.

Navigating in and out of the many people on the South Bank was quite fun and soon were found ourselves away from the crowd. For some reason there seemed to be less people out and about for a Saturday night? Of course, later into our route this would change!


Stopping briefly at various points along the way we were afforded the opportunity to take some photographs. With my beloved Ricoh GR somewhere in Japan awaiting a repair for its screen which I managed to crack on a previous ride (another story) I used the Nikon AW100. I think it did a fairly good job. 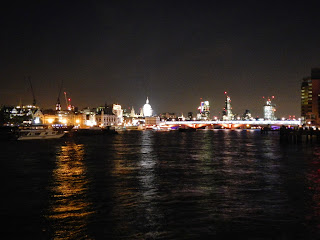 For the first part of the ride we were very much on the open road and famous London landmarks, that if truth be told us Londoners take for granted, were greeted with enthusiasm. At night there really is something special about London. If you are reading this and ever visit London make sure you see London at night! You will probably avoid the crowds and get some stunning photos. 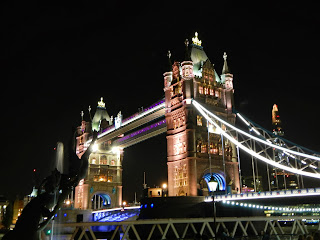 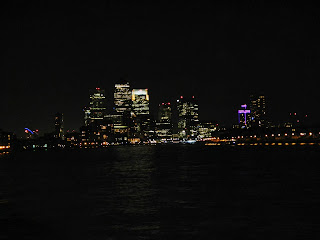 My sense of direction is quite legendary for being next to useless. Once away from all the touristy bits I was in uncharted territory. That is me saying I had not got a clue where I was?! At Camden I was last crossing a busy road before we joined the canal towpath. I have to say cycling through Camden at night was an experience I will not forget...

The first thing to point out is that the canal towpaths we cycled along were more or less unlit. Even with my Cree front light illuminating the path ahead with its full 1800 lumens, said path had to be cycled with care. Secondly, I have for some reason a fear of cycling along water of any description. A narrow canal towpath is therefore not something I find pleasing. As such I had to keep my wits about me.

As I was now forming the rear guard by fellow riders were a little ahead of me. As I turned a corner all manner of people were milling around. This was Camden on a Saturday night after all. I wouldn't say some of the people around were unsavory but it was a dark night and I didn't really care to meet them - a sheltered life and all that. There were people who looked worse for wear...people who looked up to no good and people who had obviously come to Camden to experience the nightlife and looked terrified. It was soon to be who was terrified...

Sitting on a lock gate on the distance I saw a few people sitting down. I paid them no attention as I was focusing on not plummeting to the icy depths of a canal. When near the lock I looked up to see zombies  sitting there, having a drink and a chat. When close enough one lunged towards me in a way not dissimilar to zombies on the popular television programme, 'The Walking Dead.' Now, if you have read the above please remember I hate cycling next to water and I was concentrating on the task in hand, as I  could not control what happened next...

I let out a scream. Not a manly Rambo-like scream but a Hollywood leading lady scream. I also shouted out, 'whoops a daisy!' The reaction of the assembled zombies was a surprise as this induced them to jump and cower back slightly. Making light of the fact that I screamed like a girl, I engaged them in conversation. They were a very nice bunch all from Russia. They had done all their own makeup and were quite obliging in letting me take photographs. I actually have a thing for zombies and love seeing them dressed up! 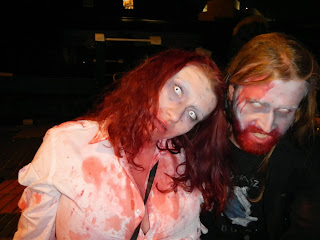 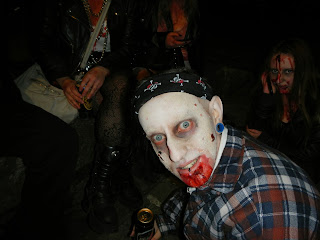 With what little dignity I could recover from the situation I put my camera away and said goodbye and was swallowed by the night.

One thing I found strange cycling along the towpaths on a Saturday night was the amount of people casually walking along them. I am not overly sure I'd walk them in daylight hours let alone during the night.

Eventually we came to what should have been familiar territory in the form of St John's Wood but to me it all looked new. Only when I reached Blomfield Road did I start to recognise where I was! When we reached Paddington Station which is very close to the canal we stopped for a few quick photos. It dawned on me how ridiculous it was of me getting lost after arriving at Paddington a few weeks ago coming back from Oxford!


At Battersea we said goodbye to David, Anne and Floyd. David had not been feeling well leading up to this ride but instead of cancelling and feeling that people might be let down, he didn't. I suppose it is testament to the sort of person he is.

The few left made it back to the London Eye before saying our goodbyes and going our separate ways. This was a really good ride. It was reasonably short and was an interesting route. In case you are wondering, yes I did make it back without getting lost!

Many thanks to David for navigating and organising the ride and for everyone who turned up. You can view my map and ride data by clicking on the link below.