I was akwoken from my slumber this morning quite early and certainly earlier than I had intended by my eldest daughter informing me with enthusiasm that an update for her brand new 'Google Nexus 7' Android Jelly Bean 4.3 was downloading. I was carried along by her happiness and felt all the better for my Brompton adventure to Brighton.

The last time I was in Brighton was when I went on the overnight London to Brighton on the Friday night ride to the coast. That particular journey was memorable for making it up Ditchling Beacon without putting a foot down and the rain. This was a ride with a difference. Train to Brighton, cycle and then train back to London. I was very much hoping that rain would not be the memorable part of this ride...

I was soon off and out and making my way to Victoria. The last week has been one almost devoid of all Brompton cycling. Last Sunday, the cold which had given notice it would be coming arrived in force. A sore throat and all the associated ills, conspired to halt all excursion of the cycling variety. I did feel that the bracing sea air would do me good, so rather than the sickly child with a note from Matron, I dutifully decided to go.

It was as always an interesting journey getting to Victoria. Thankfully there weren't any semi-rabid dogs to contend with but there were some beguiled onlookers. A few people looked on in wonder at me folding my bike. It is of course an infrequent by-product of owning a Brompton. One gentleman at Oxford Circus was even given an Orange Brompton card with my blog details. (If you are reading this I hope you do one day get a Brompton).

Arriving in good time, Victoria seemed to be as busy as it always is with people milling around, waiting for their trains or wishing friends and loved ones goodbye.

The 09:06 train from Victoria to Brighton only had two stops apart from Brighton - Clapham Junction and East Croyden which was a bonus. I have to say I was a little apprehensive about making any rail journeys after last weeks Canterbury to Charring Cross but thankfully all was good.

I travelled up with my cycling partner BumbleBee and we arrived at Brighton just before 10:00. Once out in the waiting area we saw Alan, followed by John M and Andy. Shortly after David and Anne arrived and out group was complete.

We wasted little time and were soon off and heading for the under cliff. This part of the coastline is quite stunning and with the tide coming in, on stormy days it has been known for the sea to crash into the sea wall and over the path. I was glad that it didn't do that today but nevertheless the sea looked pretty stormy. There have been weather warnings about gail force winds on this part of the coast for tomorrow and Monday and I can believe it. 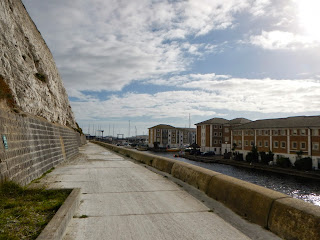 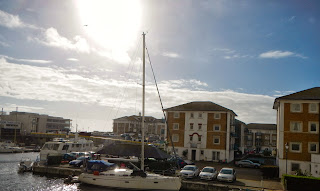 The cliffs are a site of special scientific interest due to the exposure of various layers of fossils. Many different types of fossils have been found here and I wonder whether any have made their way to the Natural History Museum in my beloved South Kensington? 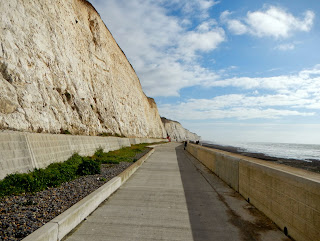 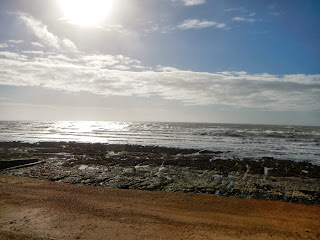 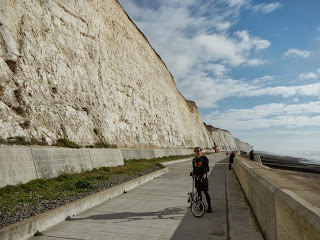 Cycling adacent to the sea was a positive assault on the senses. The sound of the waves and wind blowing. The smell of the sea air and the feeling of the wind bellowing. 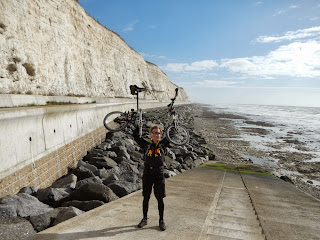 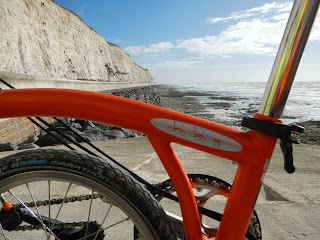 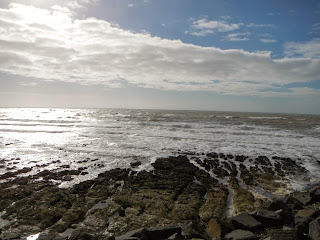 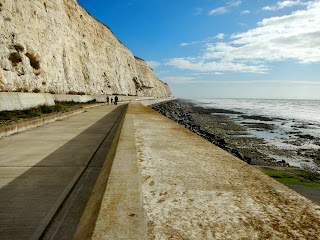 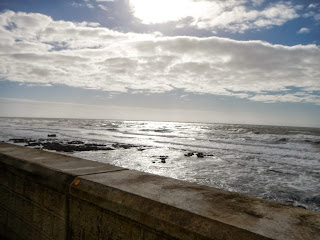 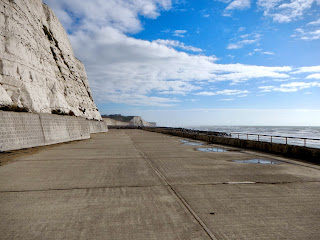 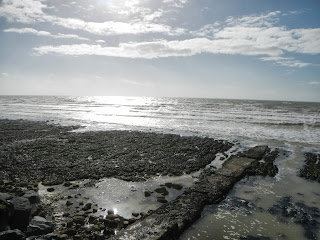 Reaching the end of the under cliff path we headed back towards the Brighton seafront. As we did memories of Friday night rides to the coast flooded back and I considered how far I have come in ine year. A year ago I am not sure I would have relished the prospect of London to Brighton and yet I have done this twice this year! 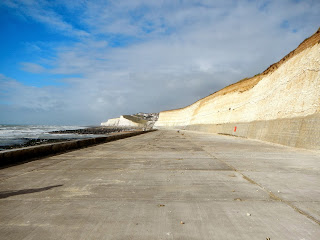 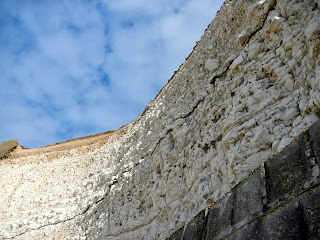 The weather was very kind to us for the entire day and it was hard to believe it is the end of October. The threat of rain didn't materialise and although very blustery, it was still very enjoyable. 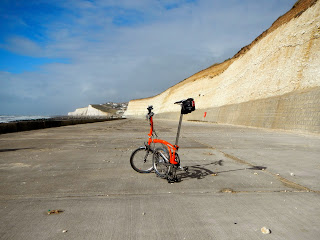 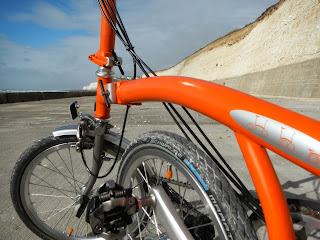 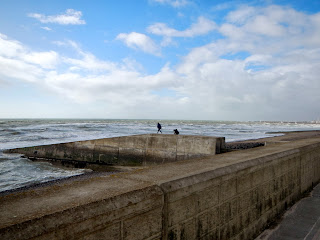 At one point on the way on the way back we saw a steep path leading down to the sea. I speculated that if Mark (King of the Hill) had of been here with us, he might have been persuaded to place bikes as far down as possible and race up to the top? 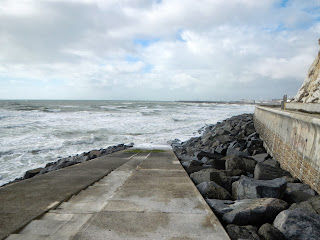 Surfers braved the strong winds and crashing waves and looked to be having a wonderful time of it. 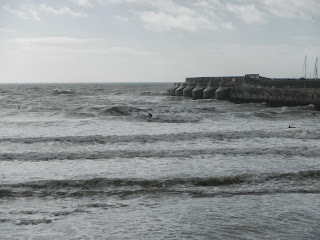 They say one should feed a cold. I took happily to this notion as I felt hungry. Luckily luncheon was served at our first stop the, Coach and Horses pub. We had to earn this first by ascending a fairly steep hill. It wasn't too much of a problem but the wind was so powerful it made the whole process demanding. In fact when coming down the other side the wind was so strong, instead of freewheeling I had to pedal!!

With luncheon over we headed off again this time to Shoreham. The ride was very enjoyable and the sea was doing its best to keep us entertained. 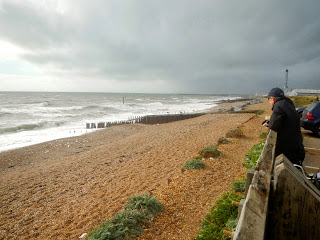 Shoreham Airport has a lovely Art Deco main building and hinted that its interior might hold some architectural gems from this period. It didn't disappoint. Ordering a pretty mean slice of 'Velvet Red' cake and a coffee I settled down to an ambiance of the Agatha Christie. At any moment one expected the great Hercule Poirot and Captain Hastings to sit down and join us. 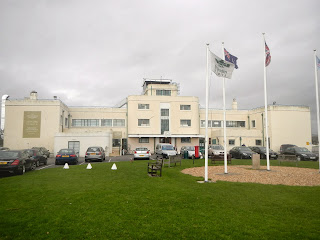 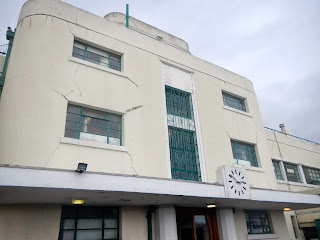 Shoreham Airport has quite an illustrious history. It was opened in 1911 and its flying school opened two years later. During the First World War it was used for departure flights across the English Channel. During the Second World War it again saw action. 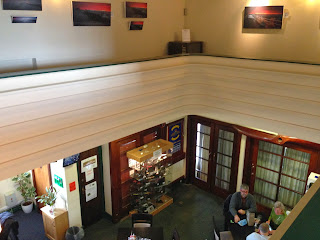 Upon leaving, I saw that David was outside and followed with my bike assuming it was the exit. My legendary sense of direction letting me down again, I had in fact followed him out to the airfield viewing area where he had merely gone to have a quick look! 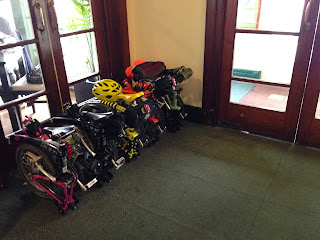 Feeling full and fuelled up we headed back towards Brighton. We said our goodbyes to Andy who had parked in Worthing while the rest of us pressed on. The sky looked quite dark and the sea was crashing in. We made it to Brighton Station before 17:00 which was great timing. Alan and John headed off for their trains while David, Anne, BumbleBee and I took our patronage to a nearby coffee shop as we had tickets for the 18:19 train to Victoria.

After a lovely coffee we headed back the station to board our train. The journey went quickly and before long David, Anne and I got off at Clapham Junction, saying goodbye to BumbleBee.

This was a great little ride. The sea air did help to blow the cobwebs out a little as far as my cold was concerned and it was a very picturesque route. It is certainly one to do again in the future. Again a big thank you to David for organising the route and navigating.

I did take my GoPro camera with me and have a little footage of us. I will endeavour to edit this and post a link when it is done.