This was going to be my last Friday night night to the coast for the year. With the nights drawing in and the weather surely turning, rides of this nature just wouldn't be feasible. It was a ride I have done before and I was looking forward to it.

For once I all my bits and pieces ready the day before. Normally I do this on the Friday itself after work. Tucking my two daughters in to bed and saying goodbye to Mrs Orange I ventured off. One of the appeals of these night rides is that I don't miss any family time. When it is time to leave everyone is going or getting ready for bed. By the time I return they are getting ready for the off.

I arrived at Charring Cross in good time and awaiting the arrival of Mark (King of the Hill). While waiting I yet again found much to amuse and occupy me.

Mark arrive punctually as always and as we we early we chewed the fat for a while before heading off for the rally point of Hyde Park Corner. There were quite a few people already there and safety procedures were being discussed. After pressing the palms of a few familiar faces we waited for the off. Someone we sadly don't see often enough, Bob who is a real character claimed that he was merely going to say hello to us all and then go home. This was extended to a bit further along as he didn't head for home until after the halfway point!


Punctual to time as ever the massed riders on all manner of bicycles, took to the open road and headed out in to the night. We passed lots of famous London landmarks as as swiftly as I could I tried to take the odd snap.

Once we passed Greenwich and headed further into Kent we gradually left the urban sprawl behind. The darkness of the night cast a veil over the surroundings and there was little to attract the eyes attention other than the blinking of lights and the reflective shine of florescent material.

As always there were lots of way markers who stood at junctions or tight turns to guide the riders the correct way. The ride was at a fair old pace. My average moving speed for the ride was over 13 mph. There were lots of stretches were we were travelling along between 16 - 20 mph.

For the most part Mark and I stayed with each other. Sometimes I would be ahead and sometimes he would. We seem to have a very good cycling relationship for these longer rides and when required form a purposeful double. Of course when we come to hills we both relish the prospect of ascending them and taking a few scalps in the process. There really is something about a Brompton and hills that works well.

There were more than a few  where the riders would thin out. On one such section I must have cycled for 6-7 miles on my own, at speed with a rear light blinking in the distance. It is on these occasions that one thinks about the strangest things. I thought about a shopping list for a food shop, what I was doing next week and whether it was too early to start Christmas shopping?

The halfway point came quickly. The Church of the English Martyrs in Strood again provided hospitality and sanctuary. For a small fee one could purchase rather good cheese rolls and tasty cakes. Washing these down with a cup of coffee we chewed the fat before venturing out into the morning air. We said our goodbyes to Bob and Femi and I hope to see Bob again when he he gets to lead his own ride.

On all these type of rides in the past, the end of the halfway point has been something not to look forward to. Not for the remaining miles to travel but for feeling cold! On all other Friday night rides I have come out uncomfortably cold. As I stepped out of the church I was ready to put on another layer but was halted by feelings, this is okay!?

The weather for the entire ride was mild. It really didn't feel like the middle of October! If anything I could have taken off a layer and jettisoned my gloves to my backpack. We were lucky  too that rain held off. A few small drops fell but nothing came of it.

A few hours after the midway point dawn was threatening to make an appearance. Robins and blackbirds began their dawn chorus but thought better of it and stopped. With the end in sight we pressed on. A few steep hills later and we were on the final leg of the journey. Cycling parallel to the estuary the end was in sight. With a final push we pressed on and soon reached the Waterfront Cafe with its excellent views and food. 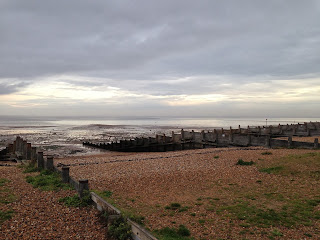 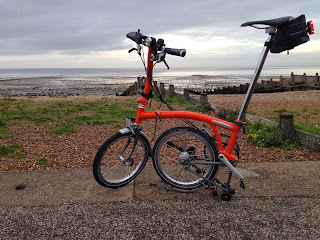 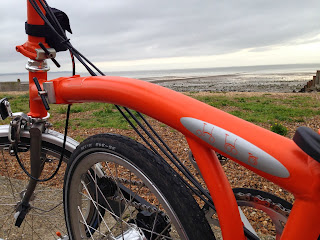 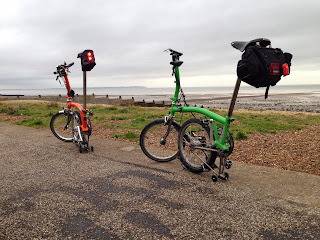 After partaking in breakfast and saying our goodbyes Mark and I decided that our legs were up to cycling the 8 miles to Canterbury. From here we could sample the delights of a a cycle route called the 'Crab and Winkle Way.' In addition at Canterbury we could get a train back to Charring Cross and come full circle. 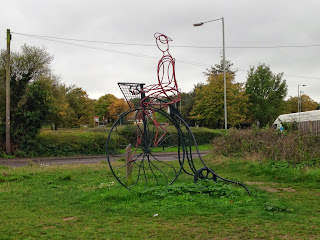 The Crab and Winkle Way was a lovely ride and very picturesque. There were parts with short by steep gradients. Normally these would be nothing to us but after cycling over 66 miles and a few miles before our legs felt tired. Besides, the last time we slept was Thursday night!!


Once at Canterbury - which was lovely by the way we did want to take some photos of the Cathedral. A sign stating the £9 entry removed this thought.

Heading for the station we boarded the train bound for Charring Cross. (More on this below the maps and ride data). This was a really good ride. I have had a little sleep and something to eat and as I type this I feel...not too bad. This may well mark the end of the the night rides to the coast but the allure of night rides will continue I am sure on a smaller scale with the hardcore members of the Brompton Club.

Many thanks to Simon for leading and organising the ride and to his many Tail End Charlie's for guiding our path. I hope that in 2014 these rides continue as they are quite brilliant.

This next part of the blog only relates the the journey home. If it this isn't for you, close the window.

The train we were on was bound for Charring Cross but as it stopped at various stations along the way it would take about 80 minutes. After passing through Petts Wood station there was a noise that sounded as if some metalwork had fallen off the train? Not long after the train ground to a halt. A few seconds later an announcement came over the PA system that the train had been involved in a fatality.

My initial thoughts were to think of the poor driver and then the unfortunate person who had probably committed suicide. It was obvious we were going to be here for some time and PA announcements confirmed this.

Many people looked upset but some actually started to complain about the delay. One man remonstrated that he was now going to be late as 'a crazy person' had decided to throw themselves on the track. This I found unbelievable. A few people sounded off about how they were going to be late. Others had the conversation about suicide of this nature being the most selfish of actions.

A paramedic came on the train to ask if passengers were okay. One young lady started to complain to him that there wasn't enough information about what was going on and that we really should know exactly what had happened. Later when a member of the Fire Service did the same she complained to him. This time that she was going to be late for her corporate lunch at a football match. I tutted and shook my head at this. Having look at this person , I shamefully summed her up in a few seconds to be a social snob who was not going to reach the status she desired.

The train eventually moved off back towards Petts Hill Station where we got off and eventually boarded another train bound for the original destination. After saying goodbye to Mark who got off at London Bridge I continued to Charring Cross where I too made my way home.

Later on in the day I saw that a young male of about 20 years old had committed suicide by jumping off the footbridge on to the track. On every level this is a tragedy. The poor driver, the other staff on the train. Those who witnessed this from the station - some of which were apparently children. The Emergency Services who had to deal with this and possibly inform parents. The parents - what will this do to them? The ripples for this one act will travel far and last. Finally, the greatest tragedy of all is that a young man felt that there were no choices other than this!
at October 19, 2013