I have been looking to get a fairly inexpensive but bright rear light for night rides and a British Winter that approached as a pace. I have had a few CatEye rear lights but haven't really thought them to be that good. Two just stopped working and the only one I have left seems at the moment okay. The Knogg rear USB chargeable light seems to near bulletproof and has already undergone harsh conditions.

A few friends at work recommended a rear light called the 'MetroFlash.' I bought mine from Amazon for £11.99 although the price does vary somewhat depending on where you shop. (In fact as I write this the price on Amazon has risen to £14.99). At £11.99 you might think the light to be cheap and cheerful.  As far as I can tell they are not.

In the pack you get the light itself, a very good mounting bracket and a couple of AAA batteries. The spec is impressive: 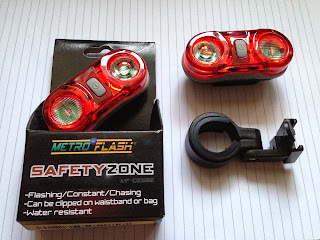 The light itself looks solid and well made - perhaps better than my CatEye rear lights. The on/off switch that turns the light on and cycles through the various modes is very sensitive. You wouldn't want to just throw the light into a pocket, bag or backpack as it would almost certainly turn itself on. I personally don't feel it is a big issue as it will be firmly attached to a seat post or bag fastening. 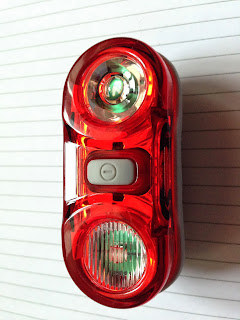 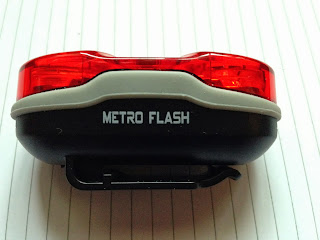 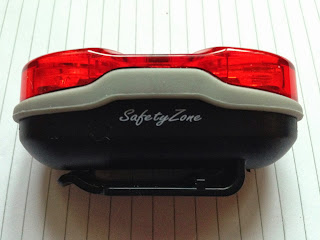 The light has a clip that one simply inserts into the bracket mount or straight on to a belt, bag loop or even clothing. Replacing the batteries is a painless process and the innards betray good a good seal against water and again appear to be of higher than expected quality for the price. 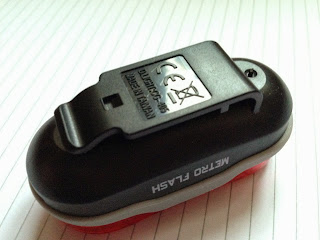 As far as the bracket is concerned once engaged there is a reassuring 'click' and it is locked in place. Removing the light from the bracket is an easy process and again a great deal better than my CatEye offerings. 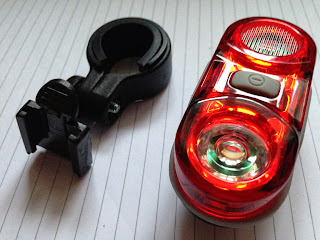 As far as the actual light is concerned, in any of the modes it is a very bright light. It is highly visible from several angles and can be seen from a considerable distance. It also comes with a lifetime warranty against defects from MetroFlash.

For £11.99 you cannot really go wrong. I used the light this morning and got caught in the rain and its waterproofing was as advertised. I imagine this light will get some heavy use during the winter and on the many night rides I have planned. Based on it build quality and initial impressions, I would have to say that come this time next year it will almost certainly be still going strong.